This month’s fallers, by and large, could just as easily be risers next month.

All these prospects possess nice potential but for one reason or another dropped in my rankings from February to March. In some cases, it was just a matter of others rising and thus somebody had to fall. The influx of overagers — 37 in my Top 217 and seven in my Top 100 — also pushed some of these prospects down a notch or even a round. And I shuffled the deck a bit in other ranges, which resulted in more fallers.

Regardless of the reasoning, here are 10 of the biggest fallers from within my Top 100 for March:

ANALYSIS: Suzuki recently scored a highlight-reel goal, showing off the talent that had him in the top-10 conversation entering the draft year (No. 10 in my preseason rankings). But Suzuki also leaves the scouts wanting more on a lot of nights and those inconsistencies have led some to question his drive. Everybody knows what Suzuki is capable of — he’s got a similar skill-set to brother Nick (13th overall in 2017) — but Ryan needs to bring that “it” factor on a regular basis the rest of the way to solidify his status as a top-20 prospect. 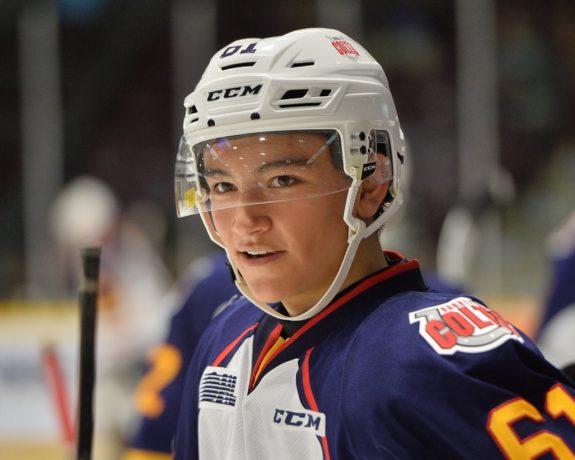 (Terry Wilson/OHL Images)
Ryan Suzuki of the Barrie Colts can bolster his draft stock again with a strong finishing kick, be it helping his team make the OHL playoffs or helping Canada at next month’s world under-18 tournament.

ANALYSIS: Kokkonen’s numbers jump off the page, he’s been really productive for his age in Finland’s pro league, but he’s cooled off a bit lately and his skill-set won’t necessarily ‘wow’ you. He’s a quality prospect and a good bet to be a first-rounder, but Kokkonen’s stat-line might have resulted in overrating him to a degree.

ANALYSIS: I’m still a big fan of Wolf, he’s still my second-ranked goaltender among first-time eligibles behind fellow American Spencer Knight, but two Russian overagers entered my rankings just ahead of Wolf — those being World Junior standout Pyotr Kochetkov (No. 61) and budding KHL stud Ilya Konovalov (No. 62). I don’t know if NHL teams will actually take one or both of those overagers ahead of Wolf but, based on talent and upside, I had to give the Russians a slight edge in my rankings. 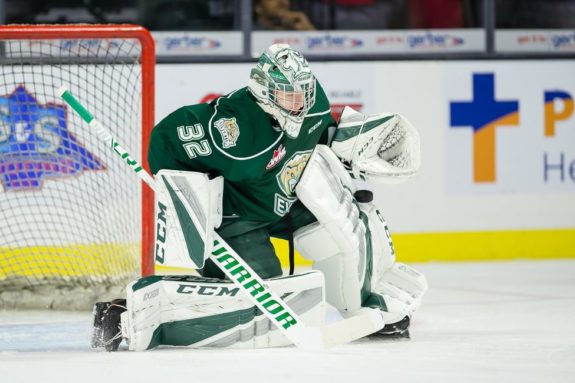 (Christopher Mast/Everett Silvertips)
Dustin Wolf has pretty much picked up where Carter Hart left off in backstopping the Everett Silvertips and contending for the WHL’s goaltender of the year award.

ANALYSIS: I’ve been up and down on Mastrosimone, depending on the month, but he’s taken a significant step in the USHL this season and has shone on some of the bigger scouting stages — from the Hlinka Gretzky Cup back in August to the World Junior A Challenge in December. Mastrosimone is enjoying a stellar draft year, so this drop is through no fault of his own. He stands out, along with the next guy on this list, as a strong candidate to move up again from the third round to the second round in next month’s rankings.

ANALYSIS: Holmstrom has been slipping due to injuries in his draft year — he’s been labelled injury prone — but he’s been productive when healthy and entered the season as a projected first-rounder (No. 22 in my preseason rankings). He’s been underscouted because of those injury absences — he missed last month’s Five Nations tournament with a concussion — but if Holmstrom can get up to speed and shine at next month’s under-18 worlds, he could soar back up my rankings.

ANALYSIS: Has had been holding steady as a late second-rounder in most of my monthly rankings to date, but I think he’s a third-rounder for me going forward. Again, not through any real wrongdoing or lack of development on his part, but other prospects have simply surpassed and overtaken Has in my rankings.

ANALYSIS: Ditto here for Mutala, who still projects as a solid middle-six pro and strikes me as a fairly safe pick in the 60-100 range. He’s a responsible two-way player capable of contributing offensively but another prospect who won’t ‘wow’ you. Effective, but not very flashy. Good, but not great. That’s Mutala in a nutshell, but I do expect him to go higher in my mock draft than in my rankings. 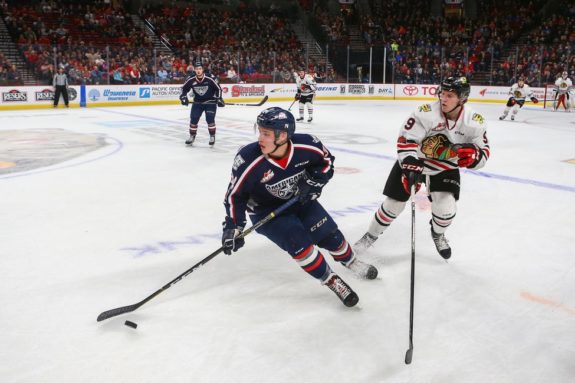 (Dayna Fjord/Portland Winterhawks)
Sasha Mutala of the WHL’s Tri-City Americans, seen here with the puck on his stick against the Portland Winterhawks, is still garnering plenty of draft interest despite not putting up an eye-popping stat-line this season.

ANALYSIS: Simoneau is another up-and-down prospect for me, rising into my second round at one point (No. 53 in December) and now falling into my fourth round. Scouts are pretty split on Simoneau and whether his skill-set will translate to the pro game. Quite the opposite of Mutala in that sense. Reality is, Simoneau is small and not all small guys make the big league despite putting up big numbers in junior. Scouts will be watching Simoneau closely in the playoffs, to see if he can be effective in those closer-checking games and when facing the same team over a seven-game series. If he passes that test, Simoneau could be on the rise again — at least back into the third round of my rankings.

ANALYSIS: Spence is having a terrific rookie season in the Q, reminding some of Samuel Girard, but he’s on the small side too and the Q hasn’t produced a ton of NHL defencemen in recent years. The stat-line is very impressive, but his size is something of a concern and the overall game is a work in progress for Spence. Like Simoneau, scouts will be anxious to see how Spence fares in the playoffs. If he holds up well, at both ends of the ice, look for Spence to trend back up my rankings.

ANALYSIS: Last but not least — and not to keep picking on the QMJHLers, nor those named Xavier — Parent hasn’t lived up to the hype this season. It’s too bad because I really liked what I saw from him at the Hlinka and had him as a first-rounder coming out of that showcase (No. 29 in my preseason rankings). Parent has since been one of my biggest fallers over the course of the draft year, but he could still turn it around too. He is, after all, playing for the Memorial Cup host team and will get plenty of exposure — for better or worse — over the next few months leading up to the draft in June. The skill is there with Parent, he just needs to find a way to unleash it.