When it comes to the Edmonton Oilers and the talk of top prospects, most people immediately shake their heads.

Loaded with talent following years of failure, the Oilers have a seemingly endless pipeline of young, talented players with aspirations of one day playing at hockey’s highest level. Of course, we know of Connor McDavid, Leon Draisaitl, Darnell Nurse, Griffin Reinhart and many more. However, the Oilers also retain a number of promising players who fly under the radar in an organization laden with lucrative youngsters.

As a result, it’s time to recognize the lesser known prospects within the Oilers organization, in particular, those who will be playing in the American, East Coast and Canadian Hockey Leagues. This is an important process, as it brings to light just how deep the Oilers have stockpiled young talent throughout their years of consistent incompetency.

In no particular order:

The emergence of Braden Christoffer within the Oilers organization is a new and positive development.

Following three years with the Regina Pats of the Western Hockey League in which he was highly recognized for his leadership abilities, Christoffer signed a one-year contract with the Bakersfield Condors, the Oilers’ American Hockey League affiliate.

However, it was in the Young Stars Classic in which Christoffer truly began to make a name for himself. Over three games, he scored three goals and added one assist for four points, including one individually beautiful goal.

Here’s the beauty goal by Braden Christoffer to give the #Oilers Rookies a 1-0 edge in the opening frame! pic.twitter.com/p04oqm47lJ

Following the Young Stars Classic, Christoffer earned a spot in the Oilers’ main pre-season camp, where he played in one game. Yet the damage had been done, and Christoffer had left a lasting impression on both the Oilers coaching staff as well as management, and as a result signed a three-year, entry-level contract with Edmonton.

In 2015-16, Christoffer will begin the season in the AHL with the Condors. However, his physical play, drive and offensive abilities could see him return to Edmonton much sooner than anticipated.

Undoubtedly one of the Oilers’ lesser known prospects, Jujhar Khaira was a third-round, 63rd overall selection by Edmonton in the 2012 NHL Entry Draft.

A prototypical power forward, Khaira enjoyed a different development than most NHL prospects. In 2012-13, Khaira played for Michigan Tech of the Western Collegiate Hockey Association, where he scored six goals and 25 points in 37 games. The following year, Khaira made the jump to the WHL’s Everett Silvertips at the age of 19, scoring 16 goals and 43 points in 59 games.

As an incredibly strong and mature forward, Khaira made the jump to the AHL this past year, and played in 51 games for the Barons, scoring four goals and 10 points in 51 games. Although his offensive production slipped, much is expected from Khaira in the future, who almost made the Oilers out of training camp in 2014-15.

The only defenseman on this list, Jordan Oesterle’s game has continued to progress over the last few years, and as a result, he could be nearing a full-time role with the Oilers following his first taste of the NHL last season.

A three-year standout with Western Michigan University of the National Collegiate Hockey Conference (NCHC), Oesterle spent the majority of 2014-15 with the Barons. In his 65 gamed played in the AHL last year, Oesterle recorded 25 points, including eight goals. 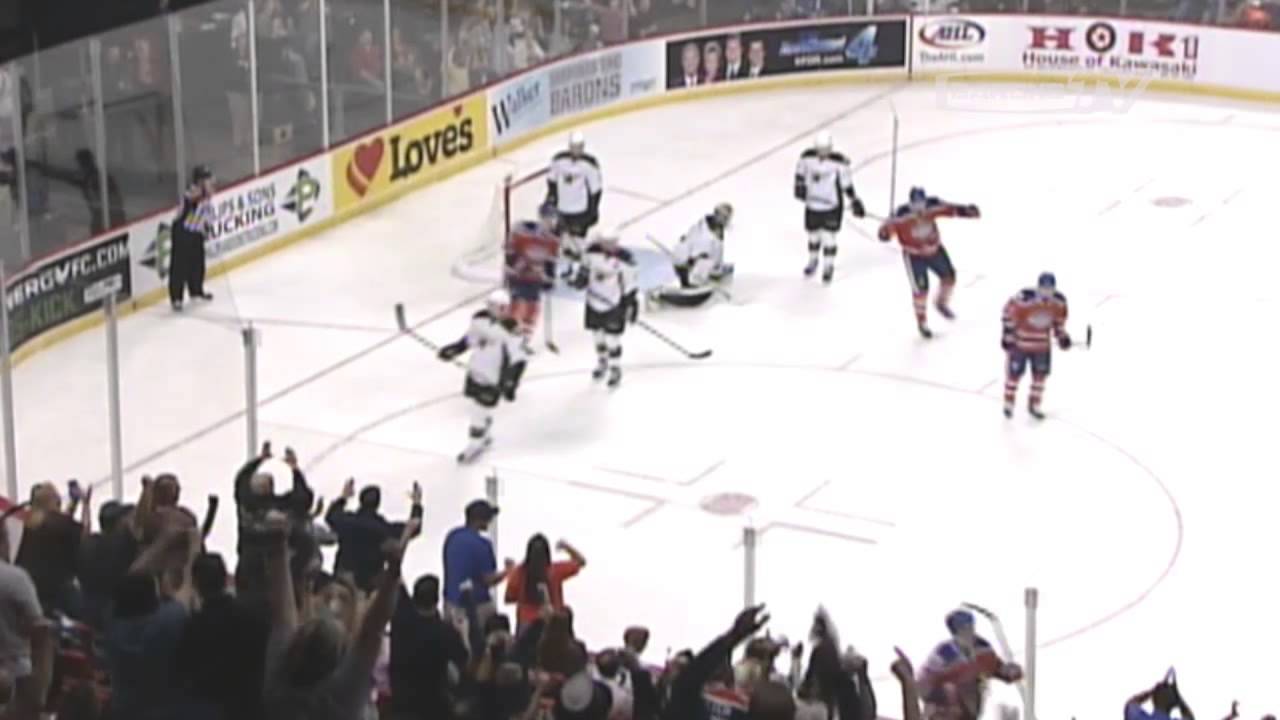 Known primarily as a highly skilled, puck moving defenseman with strong skating skills, Oesterle earned a late call-up to the Oilers in 2015 and played in six games. In those games, Oesterle did not look over-matched, while he also recorded his first career point, an assist.

Oesterle will begin the 2015-16 season in the AHL with the Barons, and will be hard pressed to return to the NHL given the Oilers’ newly improved defensive core, which features much greater depth than in seasons passed. Due to this, Oesterle’s game must continue to develop if he wishes to reach the NHL this year. Regardless, Oesterle is a highly talented player with tremendous potential, and is likely the Oilers’ top defensive prospect behind Nurse and Reinhart, however he is slated to become a Restricted Free Agent come the end of the season.

One of the youngest players on the Condors to begin the 2015-16 season, Kyle Platzer is a relative unknown, yet is a solid prospect at center-ice.

A four-year veteran of the Ontario Hockey League (OHL), Platzer played a combined 199 games for the London Knights and Owen Sound Attack, where he was a consistent offensive threat, scoring 61 goals and 139 points in those games, including 81 in his final season.

A fourth round selection, 96th overall in the 2013 NHL Entry Draft, Platzer could become a true steal for the Oilers, as he has shown steady improvement year to year throughout his career. Following the conclusion of the 2014-15 OHL season, Platzer played four games with the Barons, scoring two goals and three points.

In 2015-16, the first of his three-year, entry-level contract, Platzer will likely see regular playing time with the Condors in his first full season of professional hockey. A known goal scorer, Platzer is known best for his on-ice intelligence and solid shot, two talents which will make him a dangerous player as he continues to develop and gain strength throughout his young career.

A massive power-forward, Bogdan Yakimov is a unique mixture of size and skill, who, fortunately for the Oilers, is also a center-man.

With one year of professional hockey in North America under his belt, Yakimov adjusted well following his arrival from Russia and the Kontinental Hockey League. In his first season with the Barons, Yakimov scored 12 goals and 28 points in 57 games, solid production for a first year player. As a result Yakimov was awarded with his first NHL game with the Oilers, although he failed to register a point.

A standout with Nizhnekamsk Neftekhimik of the KHL, Yakimov parlayed a 12 point, 33 game final season in Russia into a three-year entry-level contract with the Oilers in May of 2014, and thus far has been well worth the signing.

If he continues to progress at the AHL level and can become a consistent offensive contributor, more than a single NHL game will be in store for Yakimov, who could become an extremely valuable player in the highly physical and competitive Western Conference.