As sportswriters most of us who contribute to The Hockey Writers are suckers for a great story. When legendary defenseman Ray Bourque finally won the Stanley Cup with the Colorado Avalanche in his final season after two decades with the Boston Bruins? That was an amazing story and what a moment to watch him lift the Cup for the first time. Or how about when Chicago Blackhawks star Marian Hossa won the 2010 Stanley Cup after losing in the final in each of the previous two seasons (not to mention his 2008 team beating him in 2009)? Tremendous story. So what about this season? What are the possible great Cup winning stories? The following five teams would make the best stories as 2015 Stanley Cup champions.

This choice is primarily because it would be awesome to see a Canadien team win the Stanley Cup for the first time in over 20 years. The last time the Canadiens won the Stanley Cup was 1993 and no other Canadian franchise has won it since. While Calgary, Vancouver, Winnipeg, and Ottawa are all likely or possible to make the postseason, none of them have the wide appeal and star power of the Canadiens. Carey Price is arguably the MVP of the league this season and P.K. Subban is one of the most exciting players to watch, particularly in the playoffs. Plus they might end up facing off with their arch rivals in the Boston Bruins in the early rounds. That rivalry is arguably the biggest/strongest in all four major North American sports. Either way, the Canadiens winning would be great to see (although Bruins fans could probably do without it).

For the majority of the last few seasons the Nashville Predators have been a playoff bubble team. Rarely as bad as the Oilers or Coyotes but never as good as the elite teams. Finishing anywhere from sixth to tenth in the conference never surprised anyone when it came to the Predators. However finishing 1st like they might do this season or last certainly would surprise. Long time head coach Barry Trotz always had Nashville as a hard working defensive team. New head coach Peter Laviolette still has that same defensive core but has managed to put together a lineup that can actually put the puck in the net this season.

An eighth-round pick, Pekka Rinne has developed into one of the best goalies in the game. (Don McPeak-US PRESSWIRE)

It is truly amazing the retooling the Predators have been able to do the last couple years. When Ryan Suter left recently in free agency, many thought that would sink the Predators who were finally rising to a higher level. That hasn’t been the case, still led by Shea Weber and Pekka Rinne, Nashville has developed well and brought in the right mix to be a top team this season. After all those years as a bubble team, to finally break though with two of the biggest veteran stars in hockey getting their much deserved Cup ring? It would be incredibly fun to watch that happen. 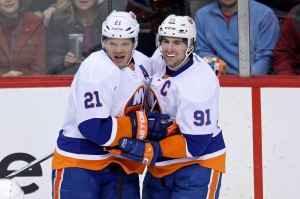 For a little perspective here, as a young adult in my mid-20s, most of my life has seen the Islanders as a really bad team. The draft bust of taking goaltender Rick Dipietro No. 1 overall back in 2000 and then signing him to an albatross of a contract headlines a list of terrible moves by previous Islander regimes. However, in recent years things have started to turn around led by super star center John Tavares, and more recent reinforcements in goaltender Jaroslav Halak and defensemen Johnny Boychuk and Nick Leddy. The Islanders are now one of the best teams in hockey and to see them breakthrough would be a very nice story.

2. New York Rangers (All the Way Back)

The Rangers went all the way to the Cup final a year ago before losing to the Los Angeles Kings. Getting to the final in back-to-back seasons is tough with all those extra games played. Don’t let what the Kings and Blackhawks have done in recent years fool you, playing lots of playoff games does take a toll when it comes to the subsequent seasons. While the Penguins were able to win the 2009 final after losing in 2008, making it all the way back and winning is a monumental task. However, no task is too big to overcome for a king, right? Henrik Lundqvist, or King Henrik as he is known by many is back healthy and ready to backstop the Rangers for another deep run. While the Rangers look a bit different from last year with some different players coming in and out, many believe they are better than last year’s team. There are few goaltenders in the league as dominant and universally well-liked as Lundqvist, seeing him persevere and finally get his ring would be a great story.

1. Minnesota Wild (Dubnyk to the Rescue)

While the four teams above would all make for great stories, every one of them pales in comparison to the that of the 2014-15 Minnesota Wild. If there were ever a story of Gandalf riding in on his white horse to save the day, it would be this year’s Minnesota Wild and goaltender Devan Dubnyk. After a strong start to the season, the Wild were in a serious tail spin. They had fallen from being among the top teams in the league to far out of the playoff picture. At one point during the skid head coach Mike Yeo had this famous blow up during an off day practice. (Warning: severe language beeped out in the video below).

Despite the hot start, there was a clear problem in Minnesota the first few months of the season: goaltending. The team was sporting one of the worst save percentages in the league. Fortunately for Minnesota, shortly after Yeo’s rant, Dubynk, the former Edmonton Oilers goaltender, was traded from the Arizona Coyotes to the Wild to help shore up the netminding. What nobody saw coming though is Dubynk hasn’t just given the Wild better goaltending, he has looked like the second coming of Patrick Roy.

Since being acquired back in mid January, Dubnyk has started an astounding 37 straight games for the Wild and stood on his head the entire time. His save percentage during that span is a ridiculous .937, a mark slightly better than what Price has done for Montreal this season. Price, the slam dunk Vezina choice and probable MVP has a .935 mark this season. It is simply astoninshing what Dubnyk has been able to pull off. Despite being a first round pick and posting decent numbers with the Oilers, nobody every thought Dubynk was anything but average playing behind that lousy Edmonton team. All of a sudden though he is playing out one of the most remarkable goaltending runs the league has ever seen. Add in the star power of players like Ryan Suter, Zach Parise, and Thomas Vanek among others, the Wild bringing the Cup to the state of hockey would be incredibly entertaining and a fantastic story.

That’s it, that’s my list! Looking forward to reading the critical comments from Capitals, Flames, and Senators fans.