Close games were the order of the day yesterday in the National Hockey League. Both scheduled games resulted in one-goal victories. The Montreal Canadiens defeated the New York Rangers 4-3 for the second game in a row, this time at the Forum in Montreal. The Toronto Maple Leafs finally scored a goal, actually two of them. That was enough to give the Leafs a 2-1 win over the Bruins in Boston.

Both Goalies Shine at Montreal

In Montreal, it was a frustrating night for the Rangers. For two periods they matched the Canadiens stride for stride and outhustled the Habs at every turn. Only the standout goaltending of Gump Worsley enabled Montreal to come out on top.

Montreal led 1-0 after one period on Claude Provost’s second of the season.

Rangers tied it up early in the second on Don Marshall’s first. Henri Richard put Montreal up by one again, only to have former Hab Garry Peters net his first as a Ranger with two and a half minutes left in the middle frame to knot the score at two.

Montreal finally took the game over in the final stanza, outshooting New York 16-9. At the 4:42 mark, defenseman J.C. Tremblay lofted one of his patented bloop shots from outside the blue line at Ranger netminder Eddie Giacomin. Giacomin, who had been unnerved by a similar try by Tremblay just minutes earlier, came out of the net to play the puck on the short hop. Unfortunately for Giacomin, the puck took a crazy bounce and slipped through his legs into the Ranger cage.

Nonplussed, the Rangers battled back for the third time in the game to tie it up once again. Big Doug Robinson took a feed from Johnny McKenzie and beat Worsley on a breakaway.

It stayed that way until 14:28 with captain Jean Beliveau potting the game-winner on a power play. New York’s Earl Ingarfield was in the penalty box for faceoff interference when Beliveau converted a rebound from a tough Dick Duff shot off the left wing.

“When you miss so many at the start of the game, it’s hard to get a goal after that,” said Beliveau after the game. “I barely had time to flip it into the corner.”

Despite giving up Tremblay’s flukey goal, Giacomin had his second straight strong game for the Rangers with 31 stops. Worsley, who made 25 saves, was praised for his work by Habs coach Toe Blake.

In Toronto, the Leafs managed only two goals against the Bruins, but Terry Sawchuk’s goaltending made them stand up for a 2-1 Toronto win.

Ron Ellis scored Toronto’s first goal of the season at 14:45 of the first period to open the scoring. The second-year right winger took a pass from Frank Mahovlich in full stride and suddenly stopped just as he crossed the Boston blue line. He fired a long shot that slipped between a surprised Boston rookie goalie Gerry Cheevers’ legs.

The Leafs went up by two at the six-minute mark of the sandwich session on a goal by Frank Mahovlich. Leafs were on a power play when the Big M recovered his own rebound and deposited the puck behind Cheevers before he could move. Mahovlich and Ellis were flying all night, which is exactly what the Leafs will have to have to enjoy any success this season.

Just about a minute and a half after Mahovlich’s goal, former Leaf Ron Stewart got one back for the Bruins on a power play. That was, however, as close as the home side would get. The third period was scoreless, and the Leafs escaped with a 2-1 win.

Sawchuk was strong throughout the game, making 37 saves. For the Bruins, Cheevers settled down after Ellis’ soft goal and was credited with 34 saves.

Bruins coach Milt Schmidt was not at all happy with the tactics employed by the visitors:

“I don’t want to read in the Toronto papers about the poor shows the Bruins put on. Not after that exhibition by Leafs. It was drab defensive hockey for over 30 minutes. They got a two-goal jump on us and then started to clutch, grab and ice the puck.

“They can thank Terry Sawchuk for the win. He had to play tremendous goal to keep my guys from running them right out of the Garden in the last 30 minutes.”

Boston Bruins general manager Hap Emms huddled with Punch Imlach and King Clancy of the Leafs for 45 minutes after last night’s game in Boston. Emms has made it well known that he covets two of Toronto’s centres, as well as winger Eddie Shack. Mike Walton, Peter Stemkowski and Wally Boyer are the names most often mentioned in connection with a deal involving Leafs and Bruins. Toronto has been after veteran Bruins left winger Johnny Bucyk for the past two seasons.

King Clancy confirmed that trade discussions were being held:

“We were talking trade but nothing developed.”

Emms, within earshot of reporters, told Clancy not to mention any names, lest it upset his players:

“ Don’t mention any names to the press, I don’t want to upset my players. But we’ll give you one for two of the guys I mentioned.”

“In a pig’s eye you’ll give us one for two. Maybe we’ll take three for two.”

Venerable Boston Garden, home of the Boston Bruins, is for sale. Harry Blake, public relations director for the building’s owners, Boston and Maine Railroad, says that a local real estate firm is actively working at selling the rink. 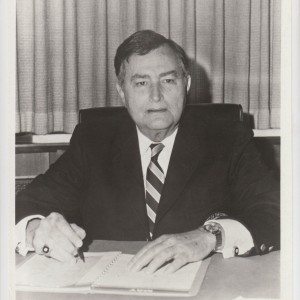 Russell Cox is president of Linell-Cox, the real estate company engaged in selling the Garden. He told the Boston Globe that the building’s future is uncertain at best:

“There’s a possibility that in five years the Garden will be a parking lot with the Bruins and the Celtics out on the street with no place to play.”

Weston Adams, chairman of the board of the Boston Garden said that the Bruins have a 20-year lease on the Garden that expires in 1971.

A new arena complex that would seat 17,000 has been proposed for the South Station area. Garden president Eddie Powers said that the Bruins would prefer to play in the new rink, but at this time there is no assurance that construction will ever take place.

Vancouver industrialist Frank McMahon, who was heading a group interested in acquiring a National Hockey League expansion franchise for the city, said yesterday they have agreed to withdraw their application.

This clears the way for a syndicate headed by Vancouver Canucks owner Fred Hume and Cyrus McLean to apply to the NHL for the team.

NHL president Clarence Campbell says that the league is planning no action with regard to a Vancouver franchise at this time. He is on record as saying Vancouver is an acceptable location for an NHL team, providing an NHL-quality arena is constructed in time for the initial season of the expansion division.

The City of Vancouver and the Pacific National Exhibition have plans to build such a facility on the PNE grounds.