Blanked for two periods, the Toronto Maple Leafs scored three unanswered goals in the final 20 minutes to score an upset 3-1 win over the first-place Montreal Canadiens in Montreal last night.

Eddie Shack, named the game’s first star, provided the spark the Leafs needed to get past Montreal. Placed on a new Toronto line with Larry Jeffrey and Bob Pulford, Shack started the Toronto scoring at 6:09 of the third period, followed by markers by his linemates.

Canadiens took a 1-0 first-period lead thanks to Ralph Backstrom’s fourth of the year. Claude Provost started the play, making a nice pass to Dave Balon after being dumped in front of the Montreal goal. Left winger Balon made a great rush down the right side and fired a blazing shot at Leaf netminder Johnny Bower. Bower made a great save on Balon’s drive, but Backstrom was Johnny-on-the-spot to deposit the rebound behind a helpless Bower. 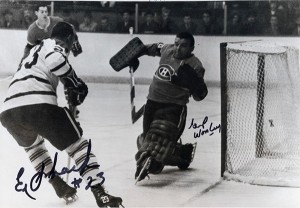 The teams battled through a scoreless middle frame, thanks to the stellar work of the goalies. Both Bower and Gump Worsley in the Montreal goal held their teams in the game.

Trailing 1-0 as the third period started, the Leafs took to the offensive, but Worsley held firm until the Shack scored his third goal in five games since his recall from Rochester of the American Hockey League. Bob Pulford’s pretty set-up pass made the goal possible.

That goal sparked Toronto, who continue to pressure the Canadiens. Five minutes after Shack’s score, Larry Jeffrey connected for his first goal for the Leafs since being obtained from Detroit in a trade last summer. Pulford was the architect of that goal as well, with Bobby Baun also earning an assist. Jeffrey skated across the front of the Montreal goal and tipped Pulford’s pass behind Worsley. 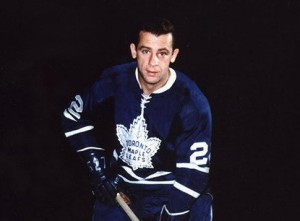 Larry Jeffrey scored his first goal as a Leaf.

The score remained 2-1 until the final minute of play. Baun was penalized by referee Art Skov at the 19:00 minute mark, so Toe Blake called Worsley to the Montreal bench, giving the Habs a two-man advantage. The strategy backfired, as Pulford fired his third goal of the season into the unguarded Montreal cage, assisted by Orland Kurtenbach.

Shack, who has been Toronto’s best skater over the past five games, actually received quite an ovation from the less than capacity Montreal crowd for a spectacular skating exhibition in the second period. Shack whirled around the Forum ice surface playing a one-man game of keep-away, and the crowd expressed it’s appreciation of the guy formerly considered Public Enemy Number One in Montreal.

Shack was surprised by the applause from the Forum crowd:

It was a nice feeling. But you know something? I’ve been getting a lot of fan mail from Montreal lately. The trouble is, half the letters are in French and I don’t know what they say – I’m going to have Marcel Pronovost act as my interpreter.

Toronto coach Punch Imlach called the Leafs’ effort their best of the season.

It has to be that way any time we come into the Forum and beat Canadiens. My players didn’t quit on any play. I was most concerned on that, considering all the talk that’s been going on about our club.

Montreal was without forwards Henri Richard and Dick Duff. Richard hopes to return to the lineup on the weekend, while Duff is about a week away. 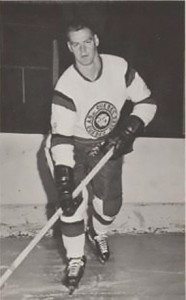 The Buffalo Bisons are off to a slow start in the American Hockey League this season, languishing in last place in the Western Division. Last night they reached a new low as they were bombed 10-5 by the Quebec Aces in Quebec City.

Jack Stanfield was the top Bison, scoring three times. Alain Caron and Gerry Ouellette had the other Buffalo markers.

Roy Edwards faced 34 shots in goal for Buffalo, with Gary Bauman called upon to handle only 18 Bison drives.

Danny Grant scored twice to lead the Peterborough Petes to a 5-3 win over the Oshawa Generals in one of two OHA Junior A games last night. Hamilton Red Wings and London Nationals skated to a 5-5 tie in the other match.

At Peterborough, Grant scored in the final minute of the first period and added his second of the night in the last minute of the third. Other Petes scorers were Mickey Redmond, Dale McLeish and Drake Jopling. Oshawa received goals from Jim Cooke, Chris Hayes and Paul Cadieux.

In Hamilton, the Red Wings came back from a two-goal deficit to earn their tie with London. Sandy Snow and Freddie Speck scored twice for the home side, with Gary Marsh adding a single.

Neil Clairmont and Stan Allen each counted twice for London. Jim Dorey had the other goal.

The Toronto Marlboros will play two exhibition matches against international opponents during the Christmas season at Maple Leaf Gardens.  The Marlies will play the Russian national team on December 14, and will meet Sweden on January 4.

A third international match at the Gardens will see the Canadian nationals face off against Czechoslovakia on January 9.

The Marlboros lineup will be bolstered by nine of the best players on the other teams in the OHA Junior A league. Marlie general manager Jim Gregory explains:

We wanted to make the games with the juniors as competitive as possible. We have received permission from the other clubs in our league to use their players.

“Our own club is young and we have had a lot of injuries. We’ll use as many players from it as possible, but we feel we have picked up the top players in the league. 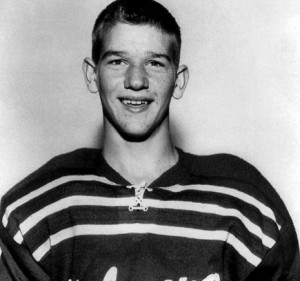 Bobby Orr will play for Marlboros against Russians.

Added to the team will be defensemen Bobby Orr of Oshawa, Serge Savard of Montreal and Gilles Marotte of Niagara Falls. Forwards who have been confirmed are Andre Lacroix and Danny Grant of Peterborough, and Danny O’Shea of Oshawa.

Other possibilities are Neil Clark of London, and former Marlie Paul Laurent, who quit junior hockey this year to attend university.

A line will also be added from Niagara Falls and will be made up of players from this list: Ted Snell, Jean Pronovost, Don Marcotte, Derek Sanderson and Bud Debrody.

The goaltender has not been determined. There is really no outstanding goalie in the junior A ranks this season, so it is possible a professional may be added. 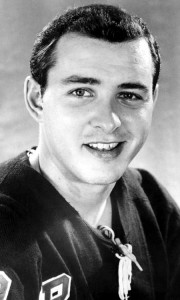