Here lies the 2014-2015 Detroit Red Wings, a team that either lived up to, or failed to meet expectations, depending on who you ask.

The folks over at the Red Wings’ subreddit were generally hoping for a higher finish for the Wings, while some experts had been predicting for the Wings to end their playoff streak for a couple of years now.

This season’s success or failure for the Red Wings all comes down to perspective.

The Red Wings playoff streak is the longest in all North American professional sports, and is also longer than The Undertaker’s Wrestlemania Undefeated Streak , which is something to be very proud of. At this rate, the Wings will need a Beast Incarnate like Brock Lesnar to take them out of the playoff hunt next year.

While this seems like such a “nothing” success to some, keeping the Red Wings legacy alive is a lot of pressure on the shoulders of these players. As much as they say they don’t think about it during the season, they do; and you’d have to believe that ownership cares about the streak as well.

Henrik Zetterberg did a great job leading this team through adversity this year, and his beard just got all the more amazing.The Zetterbeard proved once again that the cream rises to the top by leading the team in points (66) while only playing 77 games.

Zetterberg not only looks like the Macho Man but he played his heart out this season and lead the team through all the losing streaks, the short winning streaks, and everything in between. Oh captain, my captain, what a season you had.

The Kid Can Play

Sure, fans had high expectations for Petr Mrazek after his World Junior performance and being named the tournament’s best goaltender. They even had high expectations after he back stopped the Grand Rapids Griffins to a Calder Cup in 2013, but no one expected him to have such a huge impact on the Red Wings’ season already. I predicted he would start 15 games this season (the only prediction I actually had correct) and he actually started 29, and had 16 wins. He added to his 16 wins with a .918 SV%, 2.38 GAA and 3 shutouts, so the kid looked like a bona-fide starter this season. 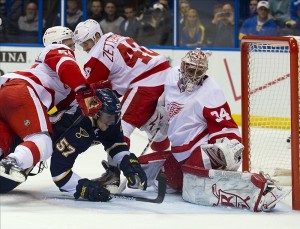 The keyword there is “this season”. Goalies get hot all the time, only to cool off. Does anyone know where Mike Morrison is at these days? Mrazek supporters can’t get too ahead of themselves when they’re calling for Howard’s head. Assuming Babcock is behind the bench again next season, I think Howard will start game 1 of the regular season. Babcock will want to give Howard the confidence to be the starter throughout the season, and, in my mind, it’s Jimmy’s job to lose still. He is still more proven than Mrazek, so I think Howard will get the slight edge that way. I do believe, however, that Mrazek will play near the 29 game mark again, so it will be interesting to see how it all shakes down next season. All in all, it was a success that Mrazek gained the experience that he did.

The Goose is Still Loose

Playoffs aside, Gustav Nyquist had a great season. Many questioned whether he could eclipse his 48 points from last season, and he did, putting up 54. While his points per game was almost cut in half, the team as a whole struggled to create offence this season. Don’t forget that Nyquist had a goal in his first 4 games of the season, and put up 7 in October alone. At 25 years old, he put up the same amount of goals as JVR and Logan Couture in the same amount of games. He had more goals than the likes of Ryan Johansen, Claude Giroux, Ryan Getzlaf and Phil “The Thrill” Kessel. Hard to get too down on the 25-year-old Swede. 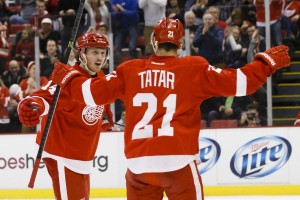 The younger half of the Euro Twin Replacements, Tatar bested his career high 39 points by putting up 56 this season, and leading the team in goals with 29. Tatar played a lot of the season on a line with Datsyuk and Helm, which seemed to do him well. At 24, he outscored Jonathan Toews, Evgeni Malkin and SIR SIDNEY CROSBY HIMSELF. The man they call Tats firmly cemented himself in the top 6 in Detroit and can really only go up from here. A 40 goal season is in his future.

Erik Cole is a long way from his 35 goal campaign in Montreal, but acquiring him and a 3rd round pick for Mattias Backman, Mattias Janmark-Nylen and 2nd seemed like a good trade by Ken Holland. Cole added grit and physicality to the Wings forward corps, something they were missing badly during the season. Another veteran seemed like a good idea, as well, and Cole had won a Stanley Cup, but it was 9 seasons ago. The 36-year-old put up 3 goals in 11 games, and a month into his Red Wings career, it was announced that he would miss the rest of the season.

There is a small chance Cole plays again at all, so it’s safe to say that this trade may not have worked out so well. Would Cole’s physicality and grit have been enough to push the Wings past the Lightning? Speculation will do the heart no good at this point, so let’s just chalk this one up as a failure and move on, as unfortunate as the circumstances were.

What else is there to say about Howard this season? He was sub par. His record was 23-13-11 this season, which doesn’t look so bad on paper, but anyone who watched Howard this season was nervous whenever the Red Wings gave up a shot against. Jimmy looked like he borrowed his glove hand from Vesa Toskala this season, and seemed more like swiss cheese than an Olympic hockey player.

Every goalie struggles, and I think everyone hopes Jimmy can find his game again, but this season was a write off for him. Time to look ahead for Jim.

It might be farfetched to say that Babcock’s contract situation added to the early playoff exit by the Wings this year, but it certainly didn’t help them go any deeper. I don’t want to claim to be a GM, but Ken Holland and company probably should have had this situation resolved before the season started.

Babcock is a Stanley Cup winner, and has been to 2 other Stanley Cup Finals, has won 2 Olympic Gold Medals as a head coach, has a career playoff record of 63–39, is now the winningest coach in Red Wings history, was the 2nd fastest coach to reach 500 wins (2nd only to Scotty Bowman), is the longest tenured NHL coach, and in the most staggering stat of all, has 0 Jack Adams trophies. No one will question that he is the best coach in the league, but will he stay in Detroit? If not, that will be the biggest failure of the entire season.

We are saddened over the passing of the 2014-2015 Detroit Red Wings at the hands of the Tampa Bay Lightning, who are still at large, in 7 games. There will be a private viewing at Joe Louis Arena this entire off-season, and the public is welcome to see the deceased next season, in Detroit.