I Am Not Making This Up: My Favourite Hockey Stories from a Career Covering the Game

– Non-Affiliate Amazon Link to the book

– Affiliate Link to Amazon (THW gets a small commission, thanks)

I reviewed James Duthie’s “The Day I (Almost) Killed Two Gretzkys” last fall.  As I stated then and still maintain:

“It’s well worth the read and is about as productive at producing laughs as Sidney Crosby is these days at racking up points.”

Duthie’s book was basically a collection of articles he’s written over the years. I was expecting much of the same with this book, but as Pittsburgh Penguins legendary announcer Mike Lange would say: “Not so fast horn man!” 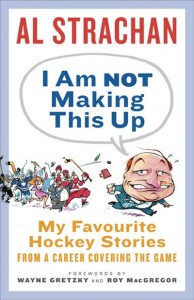 While Strachan can’t match Duthie’s humor, he relays stories from the hockey universe that only a true, well-connected insider could reveal – some humorous, some quite remarkable. For instance, where else would you find out:

In his final thoughts, Strachan reflects:

“Hockey Writers have a curious form of camaraderie. Close friendships exist between people who live in far-flung cities and see each other at irregular intervals.”

Many of the writers here at The Hockey Writers can definitely relate very strongly to this statement. THW was conceived and brought to life about two years ago. Along with emerging into one of the top independent hockey websites out there anywhere, many tremendous friendships have been forged amongst the hockey writers.

From the publisher HB Fenn:

Bestselling author and Toronto Sun sportwriter Al Strachan is a fixture in the hockey world. His hockey insight is read and enjoyed by fans from coast to coast and all across North America. He is well liked and respected by players and coaches and often is given special privileges due to a personal relationship he shares with a hockey insider that allows him the scoop on a breaking story. Strachan knows hockey and has been writing about it for almost forty years. He has been witness to the most exciting, most controversial, and most talked about episodes in hockey. He has been there for all the action and he has established relationships with the biggest names in the game from every generation and era. In his latest adventure, he relives tales from the rink that will fascinate, horrify, and entertain fans of the game. From sharing a beer and candid conversation with Gretzky to humour, never-before-revealed stories about Ken Dryden, Strachan’s book will deliver one enjoyable tale after another.