On the surface, the 2008-09 and 2009-10 seasons ended identically for the Vancouver Canucks:  two second-round exits, both in six games, both courtesy of the Chicago Blackhawks, and of course no sipping from Stanley’s mug.

But whereas at the end of many previous years everyone knew the Canucks had a ways to go to become  a contender, the 2009-10 edition of this team is arguably closer to vying for the Cup than nearly any other.  A strange thing to say, perhaps, given that the team failed yet again to make it past the second round.  But the Blackhawk team that knocked the Canucks out looks like the odds-on favorite to be the next Stanley Cup champion.  And remember that the Canucks made this Hawk team look very ordinary for two and a half games.

So how do the Vancouver Canucks look as they head into the summer, free agency, and the 2010-11 season?

After a second consecutive playoff in which he looked very human, the 12-year, $64-million contract extension Roberto Luongo received last September doesn’t look like much of a bargain.  Thankfully, at 31, Luongo still has time on his side, and his regular season was still decent, so there’s hope yet.  The best move the Canucks could make with Luongo is to give the ‘C’ to a skater — despite Luongo’s potential protests — and let their franchise goalie concentrate on stopping pucks.

Andrew Raycroft proved to be a very capable backup, but is unlikely to be re-signed.

The Canucks will likely go with perennial prospect Cory Schneider as Luongo’s backup.  Schneider must get some extended action at the NHL level if the Canucks hold out any hope of trading him for anything near what he’s worth.

The defense proved to be the Achilles’ heel of the Canuck playoff effort this year due to the sheer number of injuries sustained by the team’s blueliners.  The one the Canucks missed most was obviously Willie Mitchell, who could not overcome his post-concussion symptoms.  It remains to be seen whether Mitchell, who becomes an unrestricted free agent this summer, will return to playing hockey and, if so, whether the Canucks will try to re-sign him.  Other UFAs who will not be re-signed are Brad Lukowich and minor-leaguer Lawrence Nycholat.

On the other hand, soon-to-be RFAs Shane O’Brien and Aaron Rome will likely be tendered qualifying offers.  O’Brien, for all of his off-ice issues, has become a dependable defenseman and the most consistent physical force on the back line.  Meanwhile, Rome proved his worth as a capable fill-in down the stretch when injuries stretched the defense thin.

Late-season acquisition Andrew Alberts has another season on his contract, so he will remain with the organization — preferably with the Manitoba Moose, if general manager Mike Gillis can replace Alberts’ physicality in a far more mobile player.

Among the players Gillis will likely be targeting in the UFA market are Dan Hamhuis (Nashville), Anton Volchenkov (Ottawa), Shaone Morrisonn (Washington), and Zbynek Michalek (Phoenix) — all defensemen in their late twenties with decent size and mobility.

This is an area of concern for the Canucks, as they have no top-level defensemen prospects in the system.  Their best prospect, Yann Sauve, will be spending next season either with the ECHL Victoria Salmon Kings or (hopefully) the Moose.  Kevin Connauton did show significant progress this year with the Vancouver Giants, however, and may pass Sauve on the prospect charts.

The Canucks were able to find plenty of scoring from their top two lines this past season, and even the third line regularly generated plenty of offense.  The main problem Gillis has with his forwards is how to maintain the offense while working in the young up-and-comers and possibly injecting some needed grit.

Pavol Demitra, who becomes a UFA July 1, will almost certainly be moving on after a lacklustre postseason, returning $4 million to the salary pool.  It is conceivable, however, that Gillis will try to re-sign two other UFAs, Kyle Wellwood and Ryan Johnson.  Wellwood again stepped up during the playoffs to play his best hockey of the year.  Meanwhile, the oft-injured Johnson is a key part of the penalty kill and his absence was certainly felt.

Among the RFA forwards, the most significant is Mason Raymond, who bust through this season with 25 goals and 53 points (although his playoff numbers were a more modest 3G-1A) and is due a large raise from his previous salary of $760K.

Jannik Hansen, still only 23 even if he seems to have been with the club forever, is also an RFA July 1.  His versatility and speed will almost certainly mean he will receive at least a qualifying offer from Gillis, even if his opportunities to play on the top three lines may be disappearing with the emergence of younger, more skilled players.

Also becoming an RFA is fourth-liner Tanner Glass, who provided some speed and energy but is ultimately replaceable at a minimum salary level.

All eyes will be on three particular prospects to see if they earn regular spots in the Canuck lineup at training camp:

Gillis will be looking to upgrade size among his group of forwards, perhaps in the hope of finding a Byfuglien-esque contributor in front of the net on the power play.  The trick will be getting some modicum or at least potential of skill to go with that size, and to find such a package at a reasonable price and age.  Some possibilities: LW Brad Winchester (St. Louis), RW Evgeny Artyukhin (Atlanta), and RW Tim Jackman (NY Islanders).  Admittedly, this is not the most impressive group of players, and Gillis may have to go through the trade route to find what he is looking for, perhaps giving up some of the young, skilled players (Raymond, Hansen, etc.) they have accumulated.

Some video highlights from this past year, courtesy of YouTube….

Mikael Samuelsson’s first goal as a Canuck, in his first game as a Canuck: 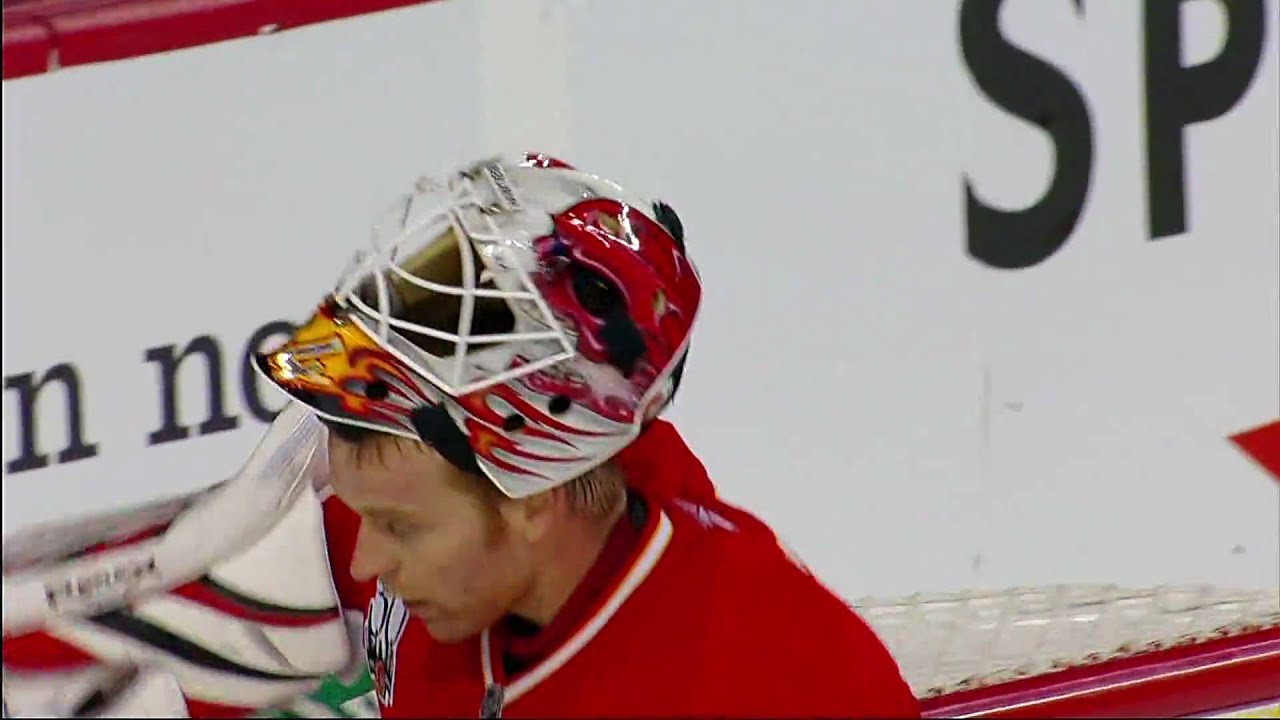 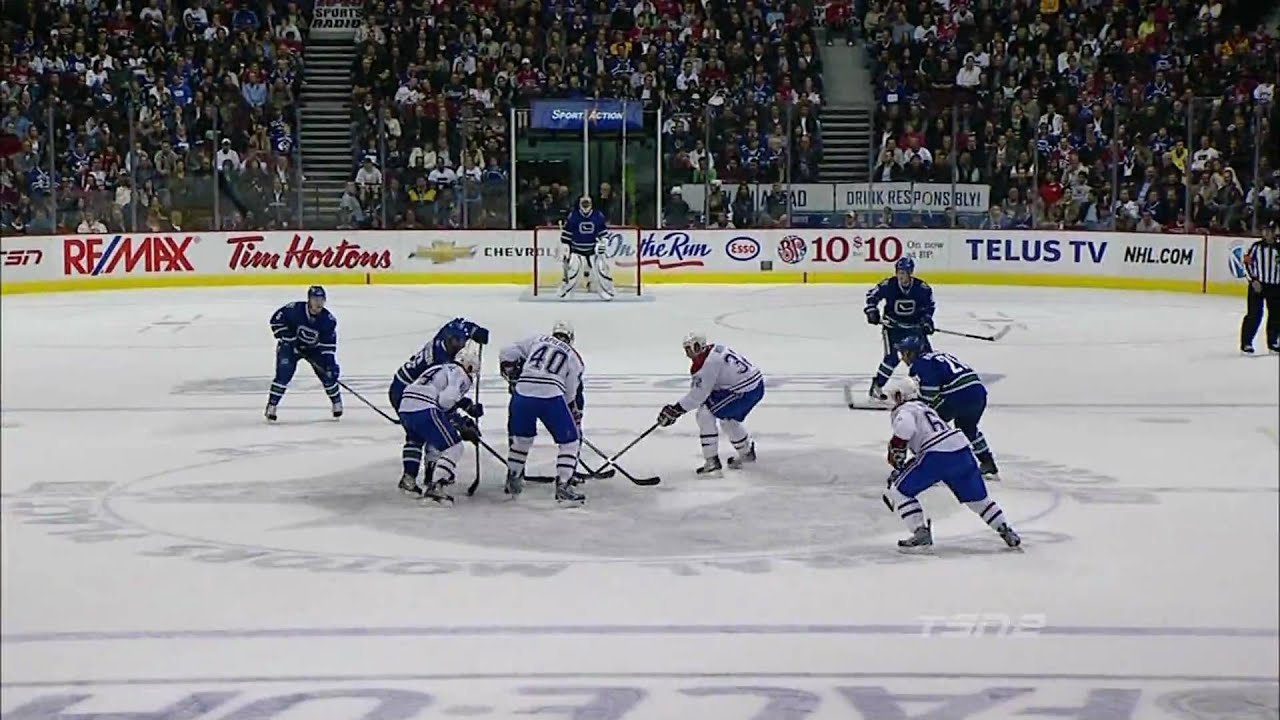 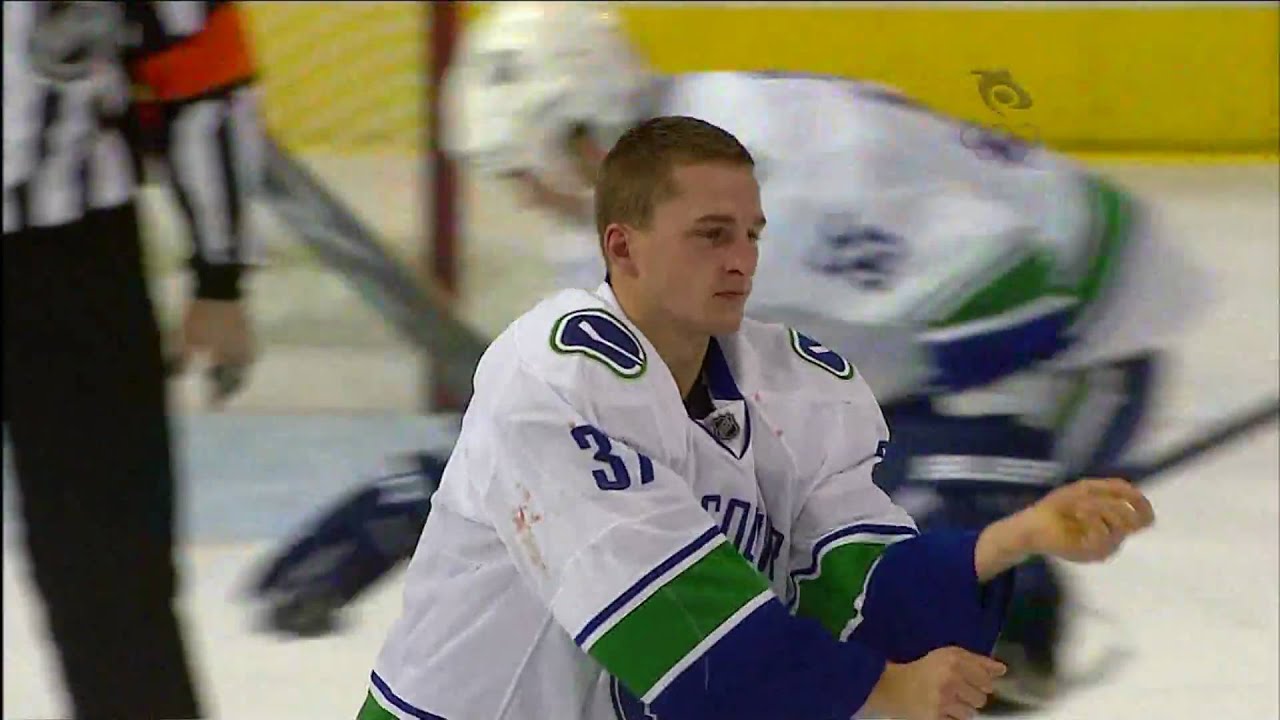 Ryan Kesler on the breakaway against the Habs: 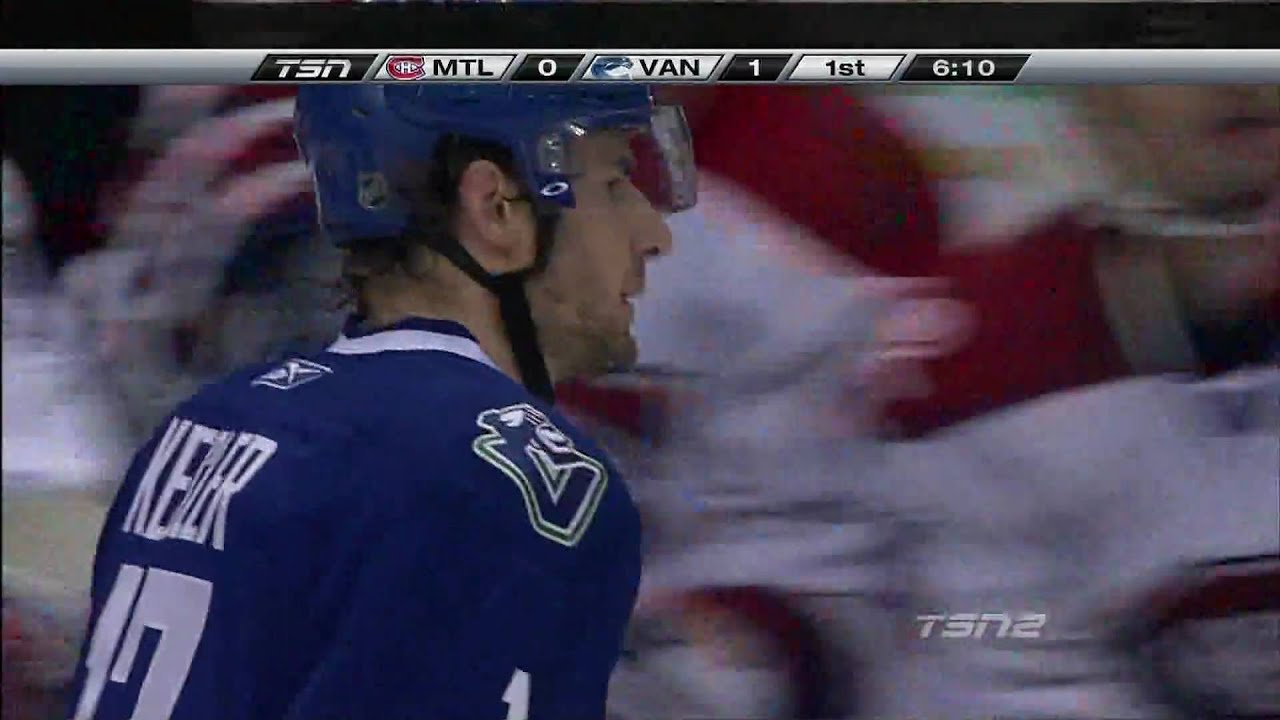 And, of course, Canadian sports network TSN’s Play of the Year: 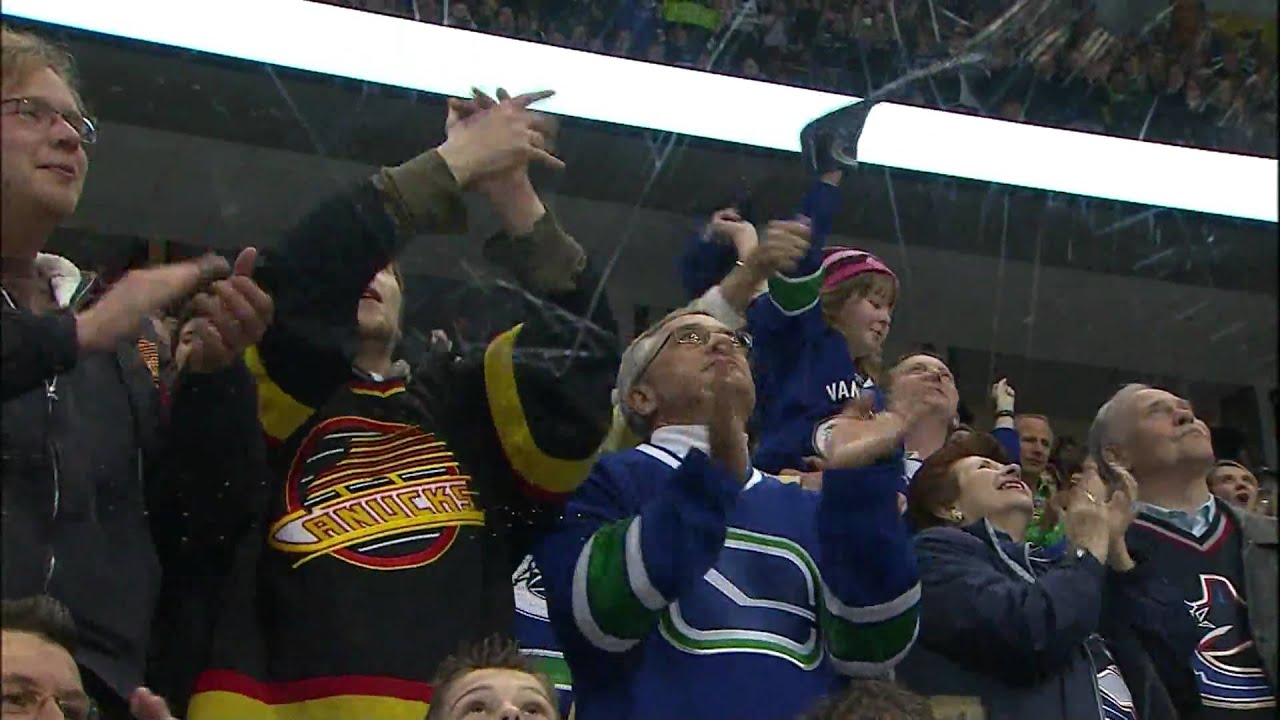 Derek Jung covers the Vancouver Canucks for The Hockey Writers. He has been a diehard (and long-suffering) Canucks fan for as far back as he can remember — well over three decades. Born and raised in Vancouver, he now lives in Clinton Township, Michigan, with his wife, son, and Center Ice subscription.

1 thought on “Another year without a Stanley Cup: Canucks post-mortem”