This past summer, the Calgary Flames opted to make a big change. They jettisoned much of their existing coaching staff and brought in a new staff featuring head coach Glen Gulutzan and assistants Paul Jerrard and Dave Cameron. When the Flames got out to a slow start – and their special teams were among the worst in the National Hockey League – the coaching change earned much criticism from outside the organization. 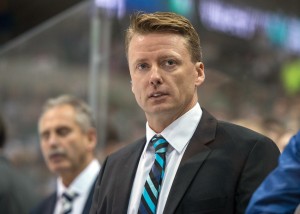 With the Flames in much better shape standings-wise and the special teams play leveling out, now may be an optimal time to ask two important questions: Are the Flames better than they were in the past, and if so, is that attributable to the new coaching staff?

To evaluate these questions, we’ve tabulated a few key metrics to compare last season’s full 82 game performance with the first 36 games of the 2016-17 campaign. (

Are They Better Offensively?

Looking at even strength offense generation:

The change in Corsi is basically just statistical noise and the movement in high-danger chances (which are basically anything around the low slot and rebound chances) is small enough to be ignored, too. The increase in scoring chances is heartening.

By the eye test, the team’s offense is slightly better. Their attack is more structured and less reliant on repeated “Hail Mary” stretch passes as they were under Bob Hartley. Considering that many of the team’s established big guns, like Sean Monahan and Johnny Gaudreau, are still here and that the only significant offensive threat added over the summer was rookie Matthew Tkachuk, it’s probably safe to attribute at least some of the improvements to the structural changes made by Gulutzan’s staff.

Are They Better Defensively?

Again, examining only even strength play:

Once again, the changes in Corsi and high-danger chances are probably small enough to ignore. The worrying thing is the increase in scoring chances against, which made a pretty significant jump.

This is likely a product of the team’s struggles adjusting (in the defensive zone) to Gulutzan’s preference for structured breakouts over the stretch pass. Those struggles have led to turnovers – particularly early in the season – and extended stays in the defensive end. The thought is that their numbers may improve over a full season, but that’s yet to be seen.

Is Their Power Play Better?

Let’s look at the offensive metrics again, but only in power play situations:

The overall Corsi and high-danger chances have decreased a small amount, but the team’s overall scoring chances (Corsi events from the “home plate” area between the face-off dots) have increase a little bit.

As with the defensive zone system changes, the Flames really struggled on the power play early on – particularly with gaining the zone on the rush and setting up. They’ve become much better at it over the past month, which has contributed to these improved numbers. It also helps that Gaudreau returned from his hand injury in mid-season form, rather than being the tentative kid he looked like to begin this season.

The power play has definitely improved, but it’ll likely be at least another month before it’s clear precisely how much is structural and how much is Gaudreau’s return from injury.

Is Their Penalty Kill Better?

Finally, let’s return to the defensive metrics but only for penalty killing situations:

By the eye test, the Flames penalty kill is improved from the passive set-up they deployed last season. However, their numbers are a mixed bag.

They’re allowing scoring chances more frequently, but high-danger chances less frequently – which suggests they’re doing a better job at protecting the very front of the net and clearing out rebounds. When you compare these numbers to the power play numbers, it’s worth noting that the Flames PK is giving opposition power plays more than their own PP is generating against opposition kills.

In other words: their kill is improved, but it’s still got quite a way to go.

A Mixed Bag of Results

Taken collectively, the Flames are a little bit better offensively and have taken strides in their power play and penalty kill. They’re a bit worse defensively, though the drag on their numbers may just be a product of how rough their October transition was.

Given that the only added piece that’s performed at a high level consistently this season has been Tkachuk – Troy Brouwer and Kris Versteeg have struggled with consistency – much of the improvements in the Flames performance in the various components of their game has to go to the new coaching staff.

Time will tell if they can keep it up, or even improve further.