By now we’ve all heard about the Twitter “controversy” surrounding Steven Stamkos. He liked a tweet suggesting that he could play for the Toronto Maple Leafs. He claimed it was an accidental like, which could be true, though its the third time something like that happens. Was it really an accident? Is he just messing with everyone? Did he only like it so he could read it later, considering the article was pertaining to his own future? We may never know the answer, but perhaps Stamkos may consider taking a break from Twitter until his contract situation is sorted out.

Here’s what we do know. The Tampa Bay Lightning and Stamkos aren’t getting anywhere in their contract talks. He wants to play center but his coach likes him on the wing. Everything else is mere speculation. The Lightning know what they have in Stamkos. They may not want to break the bank for him. They would love to have him on their team, who wouldn’t, but not if it means that a huge chunk of their cap will be in his pocket. The Lightning have a lot of good young players. Maybe they feel they could still win without him, and they could use that money on other pieces. It’s a gamble, because young stars of his calibre don’t normally hit free agency.

As for Stamkos himself, is there a chance he wants to play in Toronto, the team he grew up cheering for? He probably would love to play there, his family lives in the area. But the Leafs aren’t a Stamkos away from contending. He knows that he won’t be winning a Cup there anytime soon. At age 25, maybe he’s willing to wait it out and build something. Or maybe he would prefer to stay in Tampa. Or maybe testing the free agent market would be tempting to him, because you know plenty of teams will throw a bunch of cash his way.

From the Lightning’s standpoint, if they know they will not be getting a new contract done, they face the possibility of trading him. They would have to get his permission obviously, but it remains an intriguing option. Rental or not, the Lightning would get a lot back for him. If they find themselves as real contenders, however, they would be better served to keep him and try to win the Cup. From the Lightning’s standpoint, they seem to be in a bit of a pickle. Stamkos holds most of the leverage here.

But let’s say for arguments sake, Steve Yzerman decides trading Stamkos at the deadline and getting something back for him is best for the team. Where would he go? There are a lot of interesting destinations, but I’m going to focus in on one, the Montreal Canadiens.

The Habs stormed out of the gate to start to season, but have predictably slowed down. They have some key injuries and are once again struggling to score. I like this team. Other than the Capitals, I don’t see another Eastern Conference team as being better than Montreal. But, as currently constructed, they have a major flaw. They knew goal-scoring would be an issue, which is why they gambled on Alex Semin. I didn’t think it would work out, which it didn’t, and it leaves them yet again with the same problem.

I like the make-up of this team. The players fit and execute their system perfectly. They have lost a few games as of late but they’re always right in it. They have the best goalie in the league in Carey Price and once he’s back, he’s going to help them win those tight games. But to have an explosive scorer that could break the game open, that would be the icing on the cake.

Steven Stamkos is a reliable player on both sides of the puck, which will please head coach Michel Therrien, and he’s got that game-breaking ability. I don’t know how he would handle the intense media coverage in Montreal, and he would certainly get a boatload of attention. But with players like P.K Subban and Carey Price in the room, Stamkos wouldn’t necessarily have to be “the guy” the way he would be in a place like Toronto. Yes there would be immense pressure to produce, but he’s not the only big name on the team.

Because of the contract troubles with Tampa, there have been some arguments as to whether or not Steven Stamkos is a franchise player. He certainly looked to be earlier in his career, but his points per game have gone down since he broke his leg in 2013. His best season came in 2011-12 where he scored 60 goals and 97 points. But he hasn’t touched 50 goals since then. In fact, his overall point totals have dipped since that season, though the lock-out and his injury played a factor.

Maybe the Lightning feel that he won’t be able to reach those lofty plateaus anymore. And maybe he’s asking for a contract similar to that of Patrick Kane, in and around the 10 million mark, and perhaps Yzerman doesn’t feel he’s worth that much. Stamkos has 11 goals in 29 games, which isn’t terrible but he isn’t ranked in the top 20 in goals, assists or points. At age 25, he should be entering his prime, not declining. In his defence, his ice time isn’t as high as it could be, and he might not be comfortable with his position on the ice. 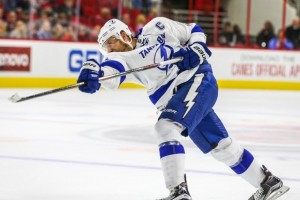 But have we over-valued Steven Stamkos? Does he over-value himself? Is he a superstar in the league? He certainly used to be, but what about right now? You’d have to think the contract issues are affecting him as well. We don’t know what’s gone on behind closed doors. There might be a conflict with his coach, yet the team just gave Jon Cooper a contract extension. How does that make Stamkos feel? There are so many factors in play here, but it does make you wonder if a change of scenery would help.

I don’t know if the Lightning will re-sign him. I don’t know if they’ll trade him. I don’t know if he will hit free agency. No one on the outside knows the answer. But, I feel as though the Montreal Canadiens should be inquiring big time about acquiring Stamkos. The question now is what would they have to give up? Their first round pick would be in that deal. A couple of prospects maybe, like Zachary Fucale, or Michael McCarron. Maybe a Charles Hudon or a Jacob De La Rose. If I’m the Habs, I make that deal. I really do believe they are an elite scorer away from making a Stanley Cup final.

By the time the trade deadline rolls around, the Habs will know what they have. Carey Price should be back to his old form. If there’s a way to acquire Stamkos that wouldn’t totally barren their system or disrupt their lineup, you have to do it. And as for Stamkos himself, who wouldn’t want to play with their best buddy?