GLENDALE, Ariz. — Christian Fischer had a goal and an assist, Richard Panik scored Arizona’s 12th short-handed goal of the season and the Coyotes snapped San Jose’s seven-game winning streak Wednesday night with a 6-3 victory over the Sharks.

Darcy Kuemper made 26 saves for Arizona, extending his winning streak to four games. 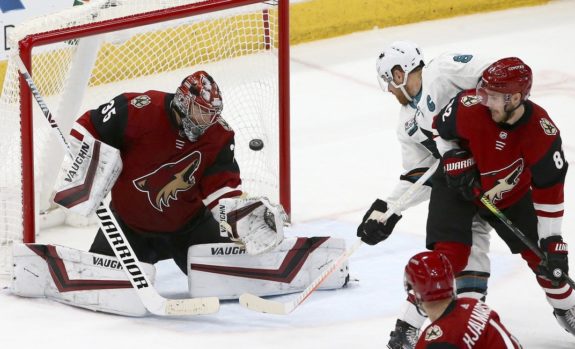 Kevin Labanc had a goal and two assists, Evander Kane got his 17th goal and Logan Couture scored for the Sharks, who were playing the second of back-to-back games after beating Pittsburgh at home Tuesday.

Erik Karlsson’s assist gave him at least one in 15 straight games, making him the fifth defenceman in NHL history to accomplish the feat.

The Sharks had not lost since falling 8-5 to Calgary on New Year’s Eve and had given up only 10 goals in their last six games.

The Coyotes killed off three of four penalties and have given up an NHL-low 16 power-play goals in 137 chances, the best percentage in the league.

Couture’s goal with five minutes remaining cut it to 4-3 but Galchenyuk scored seconds after the Sharks pulled Dell. Archibald scored moments later as the Coyotes won their fourth in five games.

Dell made 36 saves while starting in place of Martin Jones, who tied a career best with his eighth consecutive victory in the 5-2 win over Pittsburgh on Tuesday.

Crouse scored 2:31 into the game when his wrist shot from the right circle deflected off Dell’s glove. Panik scored his first short-handed goal on a breakaway less than two minutes later.

Labanc made it 2-1 in a busy first period when he picked up a rebound of Brenden Dillon’s shot from the left point and beat Kuemper high on the glove side at 6:53.

Fischer scored five minutes into the second when he brought the puck from around the net and threw it out in front from a bad angle. It ricocheted off Karlsson’s skate and under Dell’s right arm to make it 3-1.

Ekman-Larsson’s shot from the left point through Fischer’s screen made it 4-1 at 7:50 of the second period.

Kane’s wrist shot from the slot brought the Sharks to 4-2 midway through the second. Kane has 15 points in his last 10 games.

NOTES: Sharks forward Marcus Sorensen played in his 100th career game. He has career highs with eight goals and 15 points this season. … Ekman-Larsson (2011) and Crouse (2016) scored their first career goals against the Sharks. … Clayton Keller had an assist for Arizona and has 99 points in 131 games, poised to pass Max Domi as the quickest in franchise history to 100 points. Domi did it in 154 games. … Calgary (14) is the only team with more short-handed goals than the Coyotes.

Sharks: Play at Tampa Bay on Saturday, two weeks after snapping the Lightning’s 16-game point streak when Kane scored two goals to reach 200 in his career during a 5-2 victory.

Coyotes: Host the Pittsburgh Penguins on Friday before a six-game road swing, three on each side of the All-Star break.

Just How Good Was the Blue Jackets Goaltending Performance?

Aug 11th 9:05 AM
Previews and Predictions

Lightning Are Underdogs Against Blue Jackets, and That’s a Good Thing

How Torey Krug Could Impact the Detroit Red Wings’ Rebuild

Penguins Beat Themselves in the Qualifying Round

Aug 11th 8:35 AM
Previews and Predictions

2020 NHL Playoffs Qualifying Round Upsets Described in One Word