The playoffs have been and always will be a wild ride. Sometimes, the playoffs are the complete opposite of what was shown in the regular season. Game one between the Montreal Canadiens and Tampa Bay Lightning was that juxtaposition. In four games played in the regular season the two teams scored a total of 13 goals, the teams fell 4 goals short of matching that total in game one.

Carey Price was a hero of the regular season, his Herculean efforts most games is one of the main reason the Habs are in the post season. He posted a  1.42 GAA and .956 save percentage against the Bolts. Game one he saw Price beaten four times on 16 shots. The ghosts of playoff past seemed to haunt the goaltender. The golden boy of the regular season was back to being relegated as the scapegoat of the playoffs. Until overtime that is. Price stopped all nine shots he faced in the extra period, including what was his most difficult stop of the night against Alex Killorn. The overtime Carey Price is the Carey Price the Montreal Candiens need to see in game two.

The Habs put up five goals in game one for a reason, the forwards were dominant. They had everything a winning team looks for, offensive zone attack time, vicious puck pursuit, and a high shot volume. The line that contributed most to that shot volume was the trio of Thomas Vanek-David Desharnais-MaxPacioretty the group tallied a combined 17 shots on goal.

The Canadiens had 3 lines firing on all cylinders and one performing at 50 percent. This is a Godsend for Michel Therrein, who can roll out whatever line he wants and expect them to be productive. Lars Ellers return game saw him register a goal and an assist and he doled out four hits. His line mates matched the effort he brought, Brian Gionta put away his own rebound, and Rene Bourque brought a physical aspect his four hits equaled that of Eller. 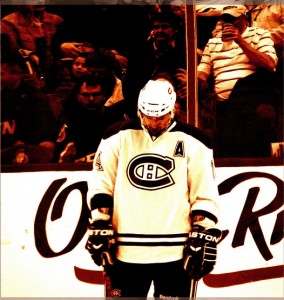 Brandon Prust looked like a player that missed the stretch run of the regular season. He was slow and rusty, and could easily be fingered for two egregious turnovers. He has to be better if the Canadiens are going to have four lines play at 100 percent capacity. Tomas Plekanec was the cerebral assassin of this line, and Brendan Gallagher was the energizer bunny. While Gallagher didn’t show up on the score sheet his tenacity had a direct impact on the game. Pleckanec was one of the better faceoff men for the Habs and also tallied a goal.

It’s as easy as flipping a switch for Danny Briere, 110 in 109 are now his current playoff totals. He made a good fourth line great, and was the catalyst for Dale Weise’s game winning goal.

The Canadiens defense was nothing to write home about on Wednesday night. Mike Weaver and Alexi Emelin looked extremely pedestrian. Weaver’s bad pinch lead to a Tampa goal, and Emelin seemed lost at times. PK Subban had an off night as well. He started of shaky and didn’t improve significantly. He made many mistakes with the puck and was forcing passes. He needs to elevate his game this time of the year not shrink it. The two anchors of the Canadiens defense also left something to be desired. Andrei Markov was a negative two, but logged the most ice time for anyone on either team. Josh Gorges played 28 minutes, he had no blocked shots and no hits. He made his biggest contribution to the game in overtime getting the second assist on the game winner.

Montreal needs to build on everything that they did in game one. The forwards were too fast for Tampa’s defense. Their offensive zone pressure got Tampa mixed up more than once, especially on the overtime goal. The Power play was anemic again, but that was just a small blemish in an overall great offensive performance. The series will go the way the Habs let it. If they keep up the level of play they brought in game one Tampa goes to the Bell Centre in a hole. If not Easter Sunday comes and we have a competitive series on our hands.