It’s hard to believe that it’s been 10 years since In The Game Inc. first released Between the Pipes, but the first all-netminder series hits the double digits officially on Thursday with its street release.

The previews for the series have been tantalizing ITG’s cult following, a group of hardcore hockey fanatics that have followed the Ontario-based company through the good times and bad.

The newest edition of the series follows the similar path of recent releases, which mixes past, present and future star goalies into a single product with remarkable results, as seen in the sample box we broke earlier this week.

Let’s start with the base series. As has become tradition, ITG offers a good helping of these prospects, including Mark Visentin and Jake Allen. While the checklist here is strong, the design does leave something to be desired if you are a fan of photography like I am. Also included in the base set are a run on today’s stars, with the best hit from our box being Tim Thomas sporting his Movember mask (and facial hair, of course).

What really jived was Between the Pipes’ hockey education subsets, which, among other themes, spotlighted the best goalies from Quebec, the U.S., the international game and the past few decades. But what really stood out was the “Expansion Tandems” run, which highlighted pairs of goalies from the “Expansion Six” era. The re-telling of the adventure of these goalies’ move to their new clubs is phenomenal on the cards’ reverse.

Now we move to the inserts, and here’s where a box break becomes really fun. Each box, on average, will contain two autographed cards, two memorabilia cards (cards that include a swatch of game used equipment), three “Masked Men” cards and three 10th Anniversary cards. As you’ll see below, we beat the odds where it counted the most.

What ITG does in Between the Pipes with these inserts is truly remarkable. The design for the Masked Men series, which features goalies and their famed protective gear, is stunning once again. The new use of red foilboard really makes the images pop more than they have in the past; and while the 10th Anniversary cards didn’t quite tickle my fancy, there are other collectors who will chase these down in a heartbeat.

The autograph designs this year are also pretty slick, staying true to the base card designs. In particular, the Decades format looks really good and hides the fact that the autographs are on stickers, rather than the actual card being signed, really well.

Finally, we get to the memorabilia cards; and really, the preview images we’ve seen on In The Game’s website don’t do the cards justice. The designs for the three cards we got look fantastic, and the 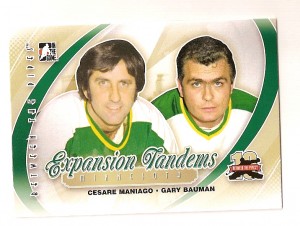 swatch size is superb. Themes here include single player jerseys, dual player “Aspire” cards that pair a team’s prospect with a current netminder and the always popular “Franchise” theme which incorporates jersey swatches from three goalies in a given team’s history. Other memorabilia cards that can be found include stick cards, “Journey” cards which have a piece of jersey from a variety of togs a player has worn in his career and even full logo  cards from CHL and AHL sweaters.

Overall, I can say that this year’s edition of Between the Pipes lives up to its predecessor’s high standards. While a couple of the designs are passable, the overall effort is fantastic and should be on collector want lists for the remainder of the hockey season and well into summer.