One game. The Boston Bruins have one game left to save their season.

No longer in control of their own destiny, the Bruins must beat the Detroit Red Wings in regulation on Thursday to still have a shot at making the playoffs or else this season will end just like last. Via collapse.

Going into Tuesday night’s game against the Carolina Hurricanes, the Bruins faced in a situation where they needed to pick up six points out of a possible, well, six points. They needed to win out and in their first contest of the three-game homestand to end the 2015-16 regular season, the Bruins lost to the Hurricanes in overtime, dropping a highly valuable point. While the Red Wings face the Philadelphia Flyers on Wednesday night, Detroit would have to lose at least two of their last three games, including the one against Boston, in order for the Bruins to have a chance at playoff hockey.

A Red Wings win against the Flyers tomorrow night makes things a bit more complicated for the Bruins on Thursday.

Allow me to editorialize a bit.

The last piece I wrote in this space exclaimed that the Bruins could very well win the East, if Washington somehow gets eliminated early. Crazy, right? Back on March 12, the Bruins were in first place in the Atlantic and a top-6 team in the NHL, if only for a very short period of time. Now, three weeks later, the Bruins are in the same spot they were in last season—coming down the wire scouring for points and scenarios where other teams would have to falter to make a playoff spot available.

It didn’t work out last season. And if history repeats itself, this offseason might be crazier than it was in 2015.

For one, there could be more panic moves that would send the team into an actual rebuilding mode. Claude Julien could very well be let go, mere weeks after being celebrated as Boston’s winningest coach. Like last year, it’s easiest to put the blame on one scapegoat rather than shift around multiple personnel…again. 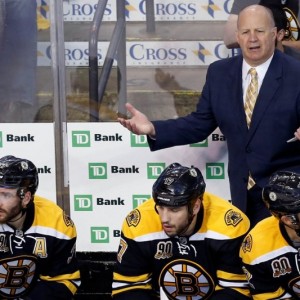 Getting rid of Julien would be counterproductive. There’s not a better coach available. If Julien wasn’t behind the bench this season, this editorial would have never gotten written because they would have been eliminated from playoff contention back in March.

Getting rid of some players, well, that’s a story for another time. Unless you think the Bruins should try to trade Tuukka Rask which is laughable and won’t be mentioned here again.

Regardless, the Bruins have been without a true identity for awhile now—maybe since 2014. They’re not big and bad, they’re not really an offensive powerhouse nor a model for defensive stability. They’re just there—wading around being a team that falls somewhere between mediocre and not bad. Want to know why this team can’t close out games or why they suddenly come alive with 20 minutes left? That’s it. Something’s just missing and sometimes, that can be a collective blame to go around rather than fall on just one person.

Don Sweeney’s made some smart moves: the Matt Beleskey signing, the Milan Lucic and later, Martin Jones trades. He’s also made some bad moves: trading a third round pick for Zac Rinaldo, not getting more for Reilly Smith and Dougie Hamilton. The same could be said for Cam Neely. Before Neely joined the team, the Bruins were without more than just an identity, they were without any viable means that could lead them to success. But, Neely fell into a Bill Belichick-like cycle: going with what worked so much that the routine turns into a bad habit.

But what happens next isn’t necessarily a sure thing. There are, of course, two scenarios. The Bruins could clean house, taking another two steps back while taking one forward. Or you know, they could just win.

If the Bruins are able to win their last final two games, beginning with Thursday against the Detroit Red Wings, and get into the playoffs, it’s reasonable to believe that jobs are safe. A looming first round matchup against a hurting Tampa Bay Lightning seems the most likely and the most enticing for a Bruins team that…okay, nobody knows what this team is capable of so I’ll just stop there.

Most importantly, if the Bruins make the playoffs, the blame game goes away if only for a playoff round or two.

The Bruins got themselves into this situation. Not just Julien, or Sweeney, or Neely, or Rask, or Zdeno Chara, or anyone else. As much as the Bruins won in the past as a team, that’s how they’re losing, too.

Kings Could Move Up to Top Pick: Here’s How