The date is November 21st, 1992 and it is nearing -30 degrees Celsius in Winnipeg, Manitoba. The New York Rangers are in town to face off against our beloved Jets. At first glance this contest means nothing more than another game in a season in which the Jets are searching for an identity. It is Teemu’s first season and what a season he is having. Then there is Tkachuk, the big hulking Yankee who had played seventeen games the previous year and was looking to build on his raw ability. However, the Jets are still just scraping by in the Smythe Division, but this particular game will forever change a franchise, a philosophy and a city.

The game mimics somewhat of a chess match, with both teams not wanting to make a mistake or give the opposition any chance of scoring. All of that changes in the second period when Mike Eagles, a veteran Jet centre, bumps resident New York Ranger tough guy Joey Kocur into the boards. Kocur immediately takes offence that this undersized journeyman would even think of hitting him. A few words were exchanged and the crowd gasped for air as the 5’10, 190 pound Eagles dropped his gloves simultaneously with one of the most feared men in the league.

The two men grapple for a few seconds, before Kocur gets his right arm free and delivers a blow that knocks Eagles out and to the ice. Joey has already begun to skate away before Eagles’ head hit the ice. The Jets’ forward stays down and looks like he could be done for the night. However, he manages to gather his wits about him and make his way to the penalty box as the Winnipeg fans applaud his courage in taking on one of the league heavyweights. The Rangers would go on to win the game by a score of 5-4 and there were no other fights in the game. The night’s recap could be easily chalked up as a close game which was lost, with a fight in the second period between two willing combatants. Little did anyone know, that the events of November 21st, 1992 would set in motion one of the most important trades in franchise history.

The following day the city was buzzing about the previous night’s loss on the scoreboard and in the fisticuffs. “I would rather wipe a cougar’s behind with sandpaper than tangle with Joey Kocur”, stated Harry Neale. The most popular thought seemed to be “Why would Eagles fight him, when he had to know he was going to lose”? The response to that question is plain and simple, he had to. Mike Eagles didn’t say to himself before the game, “I’m going to fight Kocur tonight”. The bottom line was that Eagles is a team guy and wasn’t going to let anyone intimidate him or his club, for that matter. The team had said goodbye to the heavyweights like Hartman, Cronin and Donnelly. At the end of the day, there was no one else to do it.

The Jets management knew that they had to address what happened to Eagles by facing the facts: they needed more toughness in the line-up. This was at a time when most teams had three or four guys who were willing to fight, with at least one heavyweight. The Kings had McSorley, the Blackhawks had Grimson, the Leafs had Baumgartner and the Red Wings had Probert. We had Eagles…Dean Kennedy and Igor Ulanov.

It didn’t come the next day, the next weekend or even before Christmas, but on December 28th, 1992 the Winnipeg Jets sent Ed Olczyk to the New York Rangers (ironically enough) for two men who would become local legends and forever change the face of the Jets: Tie Domi and Kris King. Tie had been in the league a few years and bounced around between the Leafs and Rangers, while Kris had been with the Rangers for a few years. These two players were not exactly household names, but their fighting majors and staggering penalty minutes were well worth Olczyk’s 20 points and -12 rating.

The new acquisitions did not wait long to make their presence felt, as King took on Bill Guerin in New Jersey a mere four days after being traded to the Jets. Domi was not far behind, as a day later, January 3rd, Tie took on Stu Grimson in Chicago. Yes, the boys from Windsor and Bracebridge, Ontario had arrived and were beginning to dissect the who’s who of tough guys in the NHL. However, it wouldn’t be until a week later when the team returned from their road trip that Winnipeg Jets’ fans were able to see firsthand the importance of these two players.

The date is January 8th, 1993, a Wednesday and it is still cold in Winnipeg, Manitoba. Wayne Gretzky and the Los Angeles Kings are in town looking to steal a win from the Jets in their own barn. The warm-ups are running smoothly and the game starts without incident. The Kings jump out to a bit of a lead and seem to be holding it, despite the relentless effort by the Jets. Then without warning, there is a conversation followed by some stick work and the gloves are off. Marty McSorley has dropped his gloves with Tie Domi who is giving up some substantial size and weight. They go toe to toe, with Domi smiling at Marty as he throws wildly at the much smaller man. The fight ends in a draw, but we would go on to make a comeback and take the game 6-3. However, there is a bigger victory here which comes in the form of a message that has been sent. Nobody comes into our rink and pushes us around.

The Jets would go on to finish 4th in the Smythe Division that year, before losing to the Vancouver Canucks in game six of the first round of the playoffs. Teemu had a phenomenal rookie season with 76 goals, while Tkachuk emerged as one of the premiere power forwards in the league. King and Domi, our two acquisitions finished the season with a combined 29 points and a staggering 385 penalty minutes in a half year of work. More importantly, they embraced the team and the community, showing us that our blue collar market and the way they played were one in the same. They took pride in the emblem on the front and looking after the names on the backs of those jerseys. It is unfortunate that three years later, we lost that team, that energy and that passion.

Fast forward two decades and the landscape in Winnipeg has changed. The Jets are back and playing in a new arena, with new jerseys and new players. The jerseys of King, Domi and Eagles have long since been packed away. The game has also changed, no longer do teams carry a fourth line enforcer to protect the top guys. The enforcer has been replaced with a new mindset, one of team toughness. Everybody plays, everybody hits and everybody stands up for each other.

The date is November 16th, 2014 and the Pittsburgh Penguins are in town. The contest is heated from the drop of the puck and you can feel the tension in the building. In the third period of the game, Penguins’ forward Craig Adams takes a run at Jets defenseman Grant Clitsome. The response is immediate when first year forward Adam Lowry challenges the hit and drops the gloves with Craig, resulting in a spirited bout which ends in a draw. There will be four separate fights involving four different players. 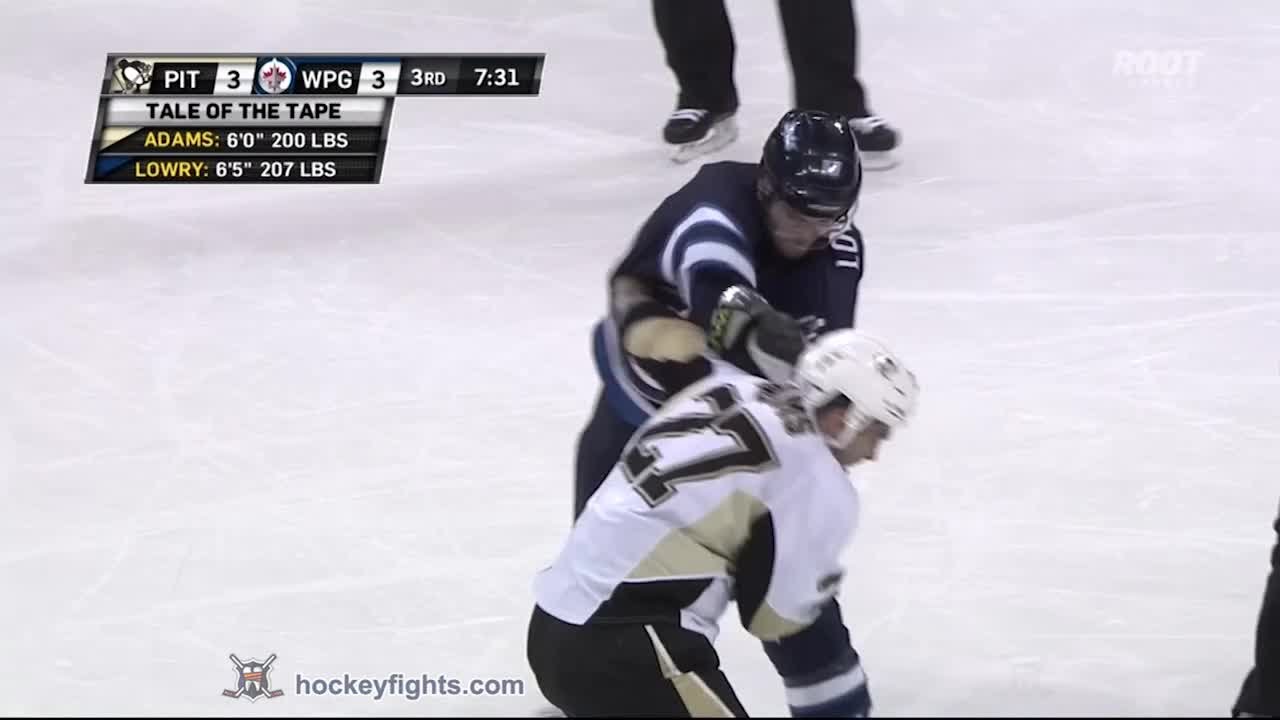 The Jets will eventually lose this game in a shootout, but just like the game in late November of 1992, there was an underlying message. However this time around, the team motto, “Fueled By Passion” has been heard loud and clear. We aren’t going to be pushed around and this team is built on team toughness. Every player brings their lunch bucket with them and when that jersey comes on, is willing to do whatever it takes to win. We are a team and a city united, which means standing up for each other and showing we belong. It means proving that a blue collar market team from the middle of Canada belongs in the corners, in front of the net and in the NHL.