The Coyotes took game 4 in the hostile Mad House on Madison 3-2 in overtime, and now own a 3-1 series lead on the Chicago Blackhawks.

The game played right into the Coyotes hands–or paws, if you will–as no goals were scored through two periods. In the third, captain Shane Doan stole the puck in the Chicago zone and eventually found a lose rebound in the slot and opened the scoring.

Less than a minute later, Tommy Pyatt received a pass from Antoine Vermette in the slot and extended the lead to 2-0.

But like we’ve seen all series, the Blackhawks don’t go away quietly, and once again, a previous healthy scratch lights the lamp.

Brendan Morrison got Chicago on the board with a shot from the right circle that beat Mike Smith on the short side. Morrison’s goal was his first playoff goal since ’06-’07 with the Vancouver Canucks.

Chicago would tie the game on a goal from another former healthy scratch when Michael Frolik backhanded the loose puck past Smith. It is the third game this series that Chicago has scored a game-tying goal with under 90 seconds left on the clock.

So once again, the teams played an extra period of hockey, and once again, the Coyotes end the overtime quickly. Mikkel Boedker skated in on a breakaway and tucked home another weak goal on Corey Crawford.

Boedker became the first player to score an overtime winner in consecutive playoff games since 2004 when a man by the name of Joe Sakic did it against the Sharks.

The Blackhawks have had no answer for the Phoenix Coyotes thus far in the series. The ‘Hawks were early favorites despite being the lower seed, but lack of production from its star players, weak goaltending, and lackluster special teams units have left the team scratching their heads.

The Blackhawks are 15th in the playoffs on the man advantage going 1-13. The ‘Hawks have been disciplined this series only taking 9 minor penalties, but are only operating at 77% on the penalty kill, good for 11th in the playoffs.

The concern going into the playoffs for Chicago was goaltending. While Corey Crawford hasn’t played terribly this series, he has given some weak goals including the two game-winners from Boedker. Crawford looks frustrated out there right now and has to refocus on stopping shots and paying attention to the little details. Don’t be surprised if Joel Quenneville decides to go with Ray Emery in Game 5 as a spark. 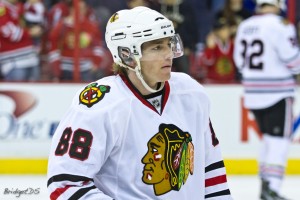 Patrick Kane has not been his usual self this series. He has 4 assists, but they came in the first 3 games of the series. Viktor Stalberg, Patrick Sharp, Duncan Keith, and Marian Hossa have a combined 1 goal and 2 assists between them. Hossa is out with injury, but the other three players need to get on the board if Chicago has any hope of coming back. Sharp’s lack of production is the most concerning considering he led the team in goals this season.