The Rangers hosted the Buffalo Sabres in Madison Square Garden on Monday night, where they earned their third win in the last four games in an exciting 6-3 win. Not only did the Rangers take the win but forward Derick Brassard earned a career-high  five point game, rookie defenseman Dylan McIlrath grabbed his second goal of the season, and the Rangers demonstrated great offensive play.

Forward Rick Nash was sidelined for the game after sustaining a few injuries in the team’s game in Carolina  on Jan.22 after he, first, fell and came into contact with the boards, and then took a puck to the leg. Defenseman Dan Boyle was also sidelined in exchange for rookie McIlrath.

The Rangers’ six goals came from, McIlrath, Viktor Stalberg, J.T Miller, Mats Zuccarello, and two from Brassard. The team took the lead in the 2nd period and maintained strong play to keep their advantage.  Many factors, like good offensive play and good shots, helped the Rangers solidify their win. 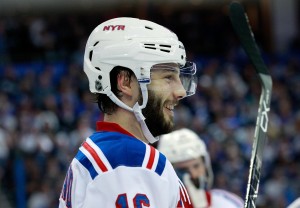 Brassard, the 1st star the game, became the first Ranger in nearly five years to play a five point game in the team’s win over Buffalo. He recorded two goals and three assists in the game, giving himself his new career high of five points in a single game.

He earned himself assists on McIlrath’s first goal of the game, Miller’s game-winning goal, and Zuccarello’s power play goal. Brass, and his points, touched almost every aspect of the winning attributes of the game.

His first goal of the game came in early in the 3rd period, with assists from Jesper Fast and Kevin Klein, and his second was an empty-netter at the end of the game. Brass’ play made him a key component to the Rangers’ win, and showed how vital of a player he is when on the ice.

Brass had challenged himself, wanting to improve his play after his recent offensive play hadn’t been pleasing him and had pushed himself into one of his best games in his career. He was an important aspect of the Ranger’s win and helped propel the team in the right direction, towards goals and won games.

Defense High and the Lundqvist Block

The Rangers topped the Sabres with 16 blocked shots in the game, and star goalie Henrik Lundqvist notched 23 saves in the game, pulling a .885 SV% for the night.  The Ranger’s defensive play was high and strong, effectively keeping the puck out of their zone and moving throughout the ice.

Rookie McIlrath took the place of defenseman Boyle for the night, pairing off with Keith Yandle who would later assist his second goal of the season. The rookie scored the first goal of the game at 5:58 in the 1st period with assists from Yandle and Brassard. Though at first the shot was believed to have deflected off Miller it was later determined that it had not and the goal belonged to McIlrath.

A good shot from a defenseman brought an even greated on-ice presence from the defense, and, because Yandle had also assisted the shot the team’s first goal heavily involved the offensive play of two defensemen. The use of each player’s offensive and defensive play elevated the skill of each player.

Defense has strong play, as did Lundqvist who made some great saves, and as for some of the pucks he didn’t stop, some might argue that one was a lucky shot.

The strong defensive presence and great play demonstrated by Lundqvist the Rangers put forward against the Sabres is the kind of play they need to preserve to keep winning. If the team keeps up this kind of play, they will help more wins fall into place.

Into the All-Star Break

The Rangers finished their last game before the All-Star break with a solid 6-3 win, making this game a great final word before resuming play following the break.

Brass was a key component to the Rangers’ win; his career high points helped the team solidify an important win that will get them through the break and hopefully let them continue on a good note.

Defensive play was necessary and important, and the use of it and the strong offensive play let the team grab the win. The team overall beat the Sabres not only in goals but in shots on goal, blocked shots, hits, takeaways, and faceoff wins. The combination off all these factors propelled the Rangers towards this important win.

Now, the Rangers will break for the All-Star break. In the meantime, captain Ryan McDonagh will take the ice in Nashville and will represent the team in the Metropolitan Division in the 2016 All-Star game, Nash will take the time to recover and will hopefully be ready for play once the break ends, and the team will push through optimistically until they take the ice again on Feb.2 in New Jersey.

When #NYR head to the All-Star break with a win @TheGarden! pic.twitter.com/oYwtkB6qbx