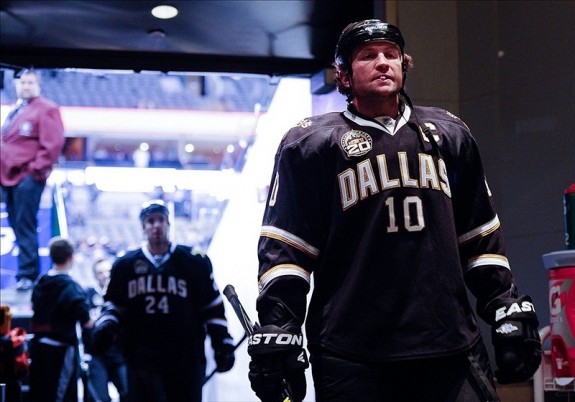 I recently read a report on SBNation that former Stars captain Brendan Morrow was engaged in talks with Canes GM Jim Rutherford. It’s an interesting piece of news for many reasons, the biggest probably being that there’s really nothing else going on in hockey.

As I have stated before, I don’t believe that the Canes really have much room up front in their forward lines. They have an abundance of forwards to start, and they also don’t have the  most salary cap space to work with. As the SBNation article mentions, any move for Morrow would likely have to follow a trade of some sort. With most teams at this point struggling to manage their cap space, any move of impact would take significant amounts of manoeuvring.

In any case, who would Rutherford trade right now in the first place? Trading a player like Tuomo Ruutu and his $4.75M cap hit might make sense, but why would Carolina trade away a veteran, grind-and-score forward just to acquire another? Trading away someone like Tim Gleason also doesn’t make much sense, especially following the news that top defender Joni Pitkanen will not be ready to start the season.

Now, Carolina actually does have more than enough space to sign Morrow even without a trade. Capgeek.com has Carolina sitting at around $4.8M in cap space, and Morrow has seen enough wear-and-tear not to warrant the type of dollars he was making before. However, every good GM knows that it’s important to keep at least some cap space for trade reasons, especially on a team like Carolina that has so many defensive holes to fill.

That is not to say that Morrow does not bring anything to the table. There’s a reason why Pittsburgh gave up top prospect Joe Morrow in a trade to acquire the Stars captain last year. Morrow hits like a truck, brings an intimidation factor, and in the right situation, still has a great scoring touch. His 11 points in 29 games last season for the Stars was pedestrian at best, but he found new life with the Pens, scoring 14 points in 15 games. With a veteran like Morrow, you know what you’re getting. There won’t be questions about dedication or compete level. The man is a consummate pro and would be a great teacher to someone like Jeff Skinner or Elias Lindholm.

Could you imagine a line of Ruutu, Nash and Morrow? It would be a forechecking nightmare, and would great a lot of space and energy for the top scoring lines. If Morrow could had at the right price and term, this could be a great investment. Perhaps one that could help push Carolina back into playoff contention.