Development isn’t a straight line and young hockey players, like young people of all stripes, often mature at different rates. In the National Hockey League’s 2019 draft class, those two truisms have become manifest in the form of 19-year-old forward Brett Leason. 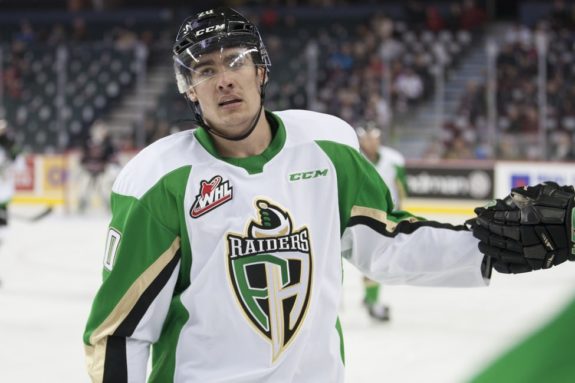 Prince Albert Raiders forward Brett Leason is a tremendous offensive player and one that baffles many amateur scouts. (Robert Murray/WHL)

In the midst of the best offensive season of his life, Leason has in equal measures impressed and perplexed amateur scouts throughout the NHL and the various independent scouting bodies in terms of how to balance his age and size with his performance. To be blunt: there’s no real consensus on when a player like him should be drafted.

The Case for Leason to Go Early

Through the first half of the Western Hockey League season, there’s something really impressive for Leason to hang his hat on: he’s the offensive lifeblood of the best junior team in Canada. He’s tied with Edmonton Oil Kings forward Trey Fix-Wolansky for the WHL scoring lead with 64 points – and has done it in three fewer games – and has 21 more points than the next-nearest Raiders player. Simply put: Leason can score, and he makes his teammates better.

Raiders general manager Curtis Hunt, who acquired Leason from the Tri-City Americans in a trade during the 2017-18 WHL season, credited the player for working his skating and mobility in the off-season. Leason’s offensive explosion is thus, in a manner of thinking, his preparation coinciding with an opportunity for a increased playing time this season with the Raiders compared to his time with the Americans.

They had a whole slew of skilled players. He probably didn’t get the exposure. There were maybe some question marks around his skating but everybody likes that size. He does have tremendous skill and a heavy shot. Certainly he has gotten everyone’s attention now.

Leason’s impressive half-season has earned him a lot of attention. Raiders games are now circled on the calendar by NHL scouts and he’s found himself climbing up the NHL draft rankings – a rarity for a player who’s already been passed over in two drafts.

The Case for Leason to Slide

There’s no doubting that Leason is a tremendous junior player and a great offensive performer at that level. He’s big. He’s intelligent. He’s mobile. But as an April 1999 birthday, he’s going to be 20 heading into the draft. He’s put up incredible offensive numbers in the WHL this season, but he’s done so as a 6’4″, 205 pound veteran in a league full of smaller, younger players.

Generally, the 20-year-olds that are picked are collegiate or college-bound players, Europeans, or occasionally players re-entering the draft after not being drafted. Typically the first-time selections from the CHL at age 20 are imports with small sample sizes in North America, or more physical players taken in the later rounds.

Prince Albert forward Brett Leason could go from overlooked and passed over in 2 NHL Drafts to a top-six forward for Canada at World Juniors and top-two round pick at 2019 NHL Draft https://t.co/ByIlasNOsm via @NHLdotcom

20-year-old draftees like Leason are thought to be closer to their developmental ceiling than their younger counterparts, so they have less runway than younger prospects and it’s arguably tougher for amateur scouting departments to let their imaginations run wild. To put it another way: Leason is closer to becoming whatever he’ll be as a pro than someone like Lethbridge Hurricanes forward Logan Barlage, so there are potentially risks in taking him earlier in the draft that might not exist for younger picks.

The closest comparison for Leason might be Toronto Maple Leafs prospect Adam Brooks. A fourth round selection of the Leafs in the 2016 NHL Draft, Brooks was passed over in the 2014 and 2015 drafts and then exploded offensively in the 2015-16 season for the Regina Pats. He had 120 points for a strong team that hosted the Memorial Cup and lost in the tournament final. He had more assists than his next-nearest teammate had points and he won the WHL scoring title by four points.

Brooks, for all his offensive dominance, went 92nd overall in the NHL Draft. Leason is a more impressive physical specimen, but Brooks was also a more established WHL producer. Leason’s in his third full WHL season and he was a half-a-point per game player in his best previous season; Brooks was drafted in his fourth full season and had been just shy of a point-per-game the season prior. Brooks was arguably a less rounded player than Leason, but Leason is much less of a known quantity at the major-junior level so there are some risks with taking him too early.

When Should Leason Be Drafted?

Simply put, Leason can score. He’s a good hockey player and he makes his team and his teammates better. He deserves to be taken in the 2019 NHL Draft and barring anything shocking happening, he will be selected. But the debates over what he is, what he could be and when it’s smart to take him in the draft are undoubtedly raging in 31 NHL front offices – and will continue to rage on until the teams converge on Vancouver in June for the draft.