Kings goalie Peter Budaj was officially sent back down to the AHL to rejoin the Ontario Reign as Jonathan Quick returned to action last night against the Washington Capitals and although Budaj was called up to the Kings along with Kevin Gravel, Gravel will be staying on the Kings roster (for the time being).

There were two factors involved as to why the veteran goalie Budaj and the young defenseman Gravel were able to be called up: the team’s decision to waive Christian Ehrhoff and the injury Quick sustained in the game against Boston last Tuesday forcing him to miss three games.

Peter Budaj Sent Back Down to the AHL

Budaj was recalled to the NHL on Feb. 11 following the news that Quick had sustained an injury. Prior to the call up to the Kings, Budaj had appeared in 296 career games in the NHL with the Colorado Avalanche and Montreal Canadiens.

After Montreal’s elimination from the playoffs in 2014, Budaj was traded to the Winnipeg Jets, lost the backup goaltending position to Michael Hutchinson, and was assigned to the Jets’ AHL affiliate St. John’s IceCaps where he had a 0-9-6 record in 19 games played.

In August 2015, Budaj was offered an invitation to the Kings’ training camp and signed a one-year deal with the team on Oct. 9 starting the season as Onatrio Reign’s number one goalie.

In Ontario, Budaj has 28 wins in 36 games after having not won a single game the year before at the AHL level with the IceCaps. In those 36 AHL games played with the Reign this season, Budaj has 0.935 save percentage and 1.58 GAA padded by his 8 shutouts.

In his debut game with the Kings against the New York Rangers on Friday Feb. 12, Budaj had a 0.857 save percentage and 3.87 GAA. Budaj remained with the team until today when the team officially announced that he was reassigned to the Reign. 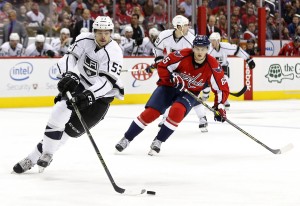 The injury to Quick opened a roster space for Budaj in the form of an emergency call-up. Ehrhoff, being waived the day before, opened up a roster spot for Kings’ 2010 fifth-round draft pick Gravel to make his NHL debut.

Ehrhoff was signed as a free agent over the summer on a one-year/$1.5 million deal and has played 40 games with the Kings. In those 40 games, the 33-year-old has 10 points and a minus-10 rating. Ehrhoff was waived giving the Kings an extra $950,000 in cap space because he was able to clear waivers.

The next day, the Kings would recall 23-year-old defenseman Kevin Gravel (along with Peter Budaj) from the Ontario Reign. Gravel made his debut that night on Feb. 11 against the New York Islanders. The Kings lost that game by a score of 5-2 with Gravel logging over 10-minutes of ice time.

Since Thursday’s loss against the Islanders, Gravel has played every other game on this current road trip. Gravel’s ice time would increase each game after until Tuesday night’s loss against the league-leading Washington Capitals.

The Kings have chosen to play Gravel over Jamie McBain as the sixth defenseman the last four games and did not hesitate to use Gravel in the final two and a half minutes. Gravel did, however receive his first minus-1 rating as Capitals’ forward Evgeny Kuznetsov put Washington ahead with 2:02 remaining in the third period.

The Kings next game and sixth on this current 7-game road trip will be on Thursday night against the St. Louis Blues. The Kings have played the Blues twice this season going 1-0-1 heading into the matchup. The Kings still sit in first place in the Pacific Division only three points ahead of the Anaheim Ducks and four points ahead of third-place San Jose.