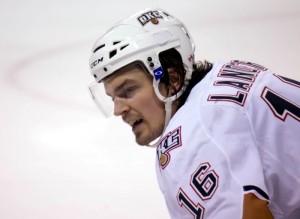 Lander, who was originally drafted by the Oilers in the second round, 40th overall in the 2009 NHL Entry Draft, is in his fourth season with the Edmonton organization. A native of Timra, Sweden, Lander was drafted to the NHL from his local Swedish Hockey League team, Timra IK.

Since his arrival in North America in 2011-12, the Oilers, unlike with the majority of their prospects, have allowed Lander to develop primarily at the American Hockey League level. In that time, Lander has played 136 games with the Oklahoma City Barons, recording 37 goals and 108 points, good for a solid 0.78 points per game.

Over the past four seasons, the Oilers have also allowed Lander to gain considerable, yet inconsistent experience at the NHL level. Prior to truly establishing himself in the NHL this season, Lander had played 94 games for the Oilers, including a 56 game stint in 2011-12. However, in those 94 games, Lander scored a mere 2 goals and 8 points.

Yet, just as Lander’s future as an NHL hopeful appeared to be coming to a quiet end, the Oilers gave him another (quite possibly his last) chance to showcase his abilities at hockey’s highest level. In the 2014-15 season, Anton has looked like a completely different player, exuding confidence as well as exceptional playing abilities, so much so that his play has warranted a contract extension. In his 33 games played at the time of the extension, Lander had scored 6 goals and 17 points, production which had blown away his previous accomplishments. 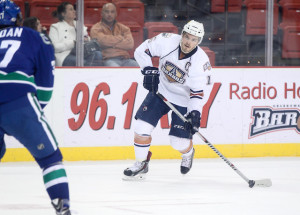 It is well known throughout the hockey world that in past years, the Edmonton Oilers have had close to zero patience when it comes to developing it’s draft picks. Players drafted in the first round were immediately inserted into the lineup whether they were NHL ready or not. While on the other hand, players drafted in the second round and beyond have largely failed to develop. However, in the case of Anton Lander, it is clear to see that considerable development at the AHL level can be extremely beneficial to a players future, a tactic the Detroit Red Wings have long known and implored.

Despite his considerable AHL development, Lander is still only 23 years old and has plenty of hockey ahead of him in the years to come. Darnell Nurse, who was the Oilers’ 7th overall pick in 2013, was returned to the OHL after he was drafted, and if the Oilers hope to change their developmental philosophy, should play at least one season in the AHL before becoming a full time NHL player.

However, at the end of the day, the extension of Anton Lander is a fantastic move by the Edmonton Oilers. Lander, who has been substantially developed at the AHL level, not only appears ready but has proven through his play that he is ready to contribute to the Oilers’ success on a full time basis. If Lander’s play continues to improve based on his play this season, this extension looks to be an absolute steal for the Edmonton Oilers.