The McEichel lottery: Connor McDavid and Jack Eichel. The No. 1 and No. 2 overall picks at the 2015 NHL Entry Draft held at the BB&T Center in Sunrise, Florida had been hyped all season as generational talents, ready to step in and make an impact for their new teams.

The Edmonton Oilers, the NHL’s third-worst team in 2014-15 that won the lottery, chose the insanely gifted, talented and speedy McDavid. Drafted first overall, he was tagged as the best prospect to come along since Sidney Crosby in 2005. The electric playmaking center had uncanny anticipation of where the puck would be, hands spun of silk, and could stickhandle his way out of a phone booth. His acceleration and speed were only outdone by his ability to make plays at full speed.

The Buffalo Sabres chose Eichel, a consensus, no-brainer selection with their second overall pick. Had McDavid not been around, most scouts considered Eichel to be an above-average first overall overall choice. The Boston University freshman Hobey Baker Award winner had exceptional speed and his puck skills were well documented. He showed incredible hockey sense to go with a long, effortless stride and a laser-like accurate shot. He was a playmaker at heart, an imaginative passer who controlled the pace and flow of a game when he was on the ice.

Both were positioned as franchise-altering centers. But four years later, only one has appeared in the playoffs and together they have a grand total of one postseason series win. It’s hard to imagine it would play out this way. Each superstar was supposed to turn his franchise around. Two fanbases are left holding their breath.

Another Lost Year for Sabres & Oilers

When the Sabres host the Oilers Monday night in KeyBank Center in Buffalo, nothing will be on the line. Both franchises are fumbling and stumbling yet again. Both teams are headed for another playoff-less April.

Tough times, roster overhauls and questionable front office leadership have plagued both franchises, located in markets where hockey is a big part of life. 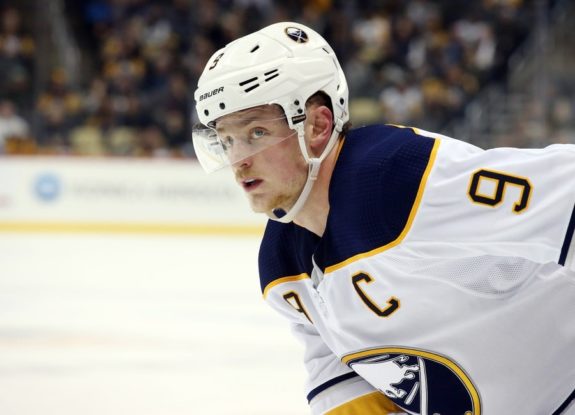 Buffalo Sabres center Jack Eichel can only do so much by himself. (Charles LeClaire-USA TODAY Sports)

The biggest glaring difference between the two teams since the big draft is their offense. The Oilers have scored 851 goals to the Sabres 779. Their goals against is pretty much even (the Sabres have allowed seven more goals).

The Oilers, a once-proud franchise home to Wayne Gretzky, Mark Messier and many other Hockey Hall of Famers, has floundered and fizzled. They’re on the road to failing to make the playoffs for the 13th time in the last 14 seasons. McDavid’s frustration is easily seen.

In his second season, 2017, McDavid finally led the team to the playoffs. They defeated the San Jose Sharks in six games then fell to the Anaheim Ducks in seven in the second round.

Todd McLellan was behind the bench for the Oilers but was replaced 20 games into this season by Ken Hitchcock.

Since Eichel was chosen, the Sabres have yet to make the playoffs. In fact, they haven’t qualified for them since 2011. Other than Carolina Hurricanes, who look playoff-bound this year, the Blue and Gold hold the longest Stanley Cup playoff drought in the NHL. This year’s absence will mark their eighth consecutive year of making early tee times.

Sabres general manager Tim Murray, a man of few words and many stares, selected Eichel. He was jettisoned in April 2017 and replaced by Jason Botterill. Dan Bylsma coached the Sabres from 2015-17 and was sent packing with Murray. He was replaced by rookie bench boss Phil Housley. 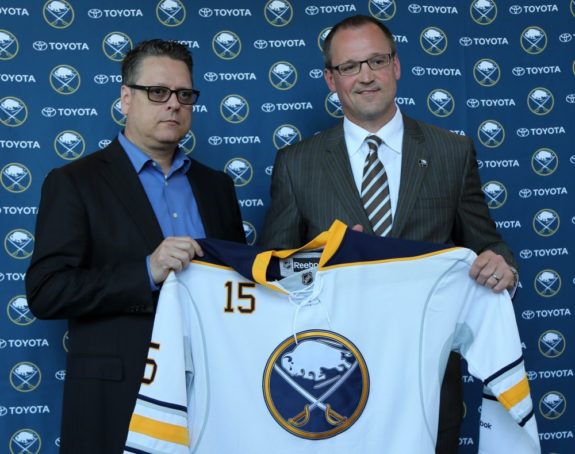 The Sabres, who sat in first place overall in the NHL standings in late November, will join the 2017 Philadelphia Flyers as the only teams in NHL history to miss the playoffs in a season in which they had a ten-game winning streak. Since they strung together their franchise-record tying winning streak, the Sabres can barely win a coin toss. They haven’t won back-to-back games since December (33 games). It’s a longer stretch than their tank team of 2014-15 (31 games).

“It’s hard to win any game in this league,” said Housley after their most recent loss. “I’m just saying this is a tough league to play. There’s a lot of parity.”

McDavid and Eichel, two players that were supposed to bring stability and success to their respective franchises, have not been able to lift their teams yet. The captains have, however, had individual success.

McDavid already has two Art Ross Trophies, two Ted Lindsay Awards and a Hart Memorial in his collection. In 270 career games, he has 120 goals and 226 assists for 346 points. This season, he has 90 points in 61 games. He’s on pace for his third straight 100-point season.

Eichel hasn’t collected any hardware, but has been selected for two All-Star Games. Through 271 career games, he has 96 goals and 151 assists for 247 points. This season, he’s on target for his first 30-goal season. He’s already collected 47 assists and 70 points – both career highs.

Where to Go from Here

While Botterill stated that Housley’s not going anywhere, patience is running thin in Buffalo. Hitchcock may not be the answer in Edmonton, either. They could both easily be replaced after the season is over. There’s plenty of blame to go around: talent-poor rosters built by GMs, poor player deployment by coaches, and players not executing.

Loss after loss, season after season, it’s adding up and as fans continue to suffer. Not to mention two generational talents.