While homeowners wince at the idea of pests in their house, the Buffalo Sabres have gladly welcomed one to their organization, inking forward Matej Pekar to a three-year, entry-level contract.

Pekar, a native of Turnov, Czech Republic, was chosen in the fourth round (94th overall) of the 2018 NHL Entry Draft. The 6-foot, 173 pound 18 year old already has six goals and five assists in 10 games with the Barrie Colts of the OHL.

Proving his versatility, Pekar has scored two goals with the man advantage, two shorties and two at even strength.

A Player You Love to Hate

Pekar is a shifty forward who plays much bigger than his size. He’s both an agitator and a top-line playmaker. He’s a pesky pest that will get under the opponent’s skin and drive them crazy. He’s a ball of energy that plays hard in both ends of the rink. The two-way forward played top-line minutes with Muskegon and saw time on both the power play and penalty kill. 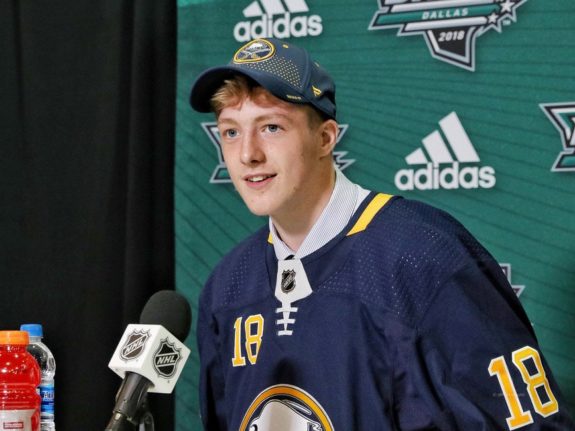 Pekar is a playmaker at heart but does have a quick-release shot. He battles hard and is strong along the boards, constantly pursues the puck and takes defense seriously. His energy and effort are never in question. Above all, the man with the mischievous smile says he likes to get into the minds of skilled players, getting them off their game.

Pekar prides himself on emulating the pesky play of Boston Bruins agitator Brad Marchand. While Marchand is a rat, Pekar is a gnat. Don’t let his baby face fool you, he’s full of mischief.

Hawerchuk, a 2001 Hockey Hall of Fame inductee, has been the coach at Barrie since 2010. He sees Pekar’s work ethic on and off the ice, adding, “He’s just one of those ‘never-quit’ guys.”

Related: The Best Nicknames in Hockey

Pekar took part in the Sabres Prospects Challenge. Despite bigger names like Casey Mittelstadt, Alexander Nylander and Rasmus Dahlin, Pekar found a way to make an impression. While he got leveled by Dahlin once, he also got under the skin of Mittelstadt to the point of nearly coming to blows. He also tallied two goals in the French Connection Tournament.

This September, Pekar was assigned to Barrie after about a week at training camp. Rubbing elbows with stars like Jack Eichel and Jeff Skinner and working with pro-level staff was really helpful. It helped give him some perspective and poise.

Pekar admits he has a lot to work on – strength, footwork and his technique for digging out pucks from the corners. Right now, he’s soaking up as much hockey sense as he can from his coach. “[Hawerchuk] is teaching us the NHL-type of game–all the little details,” added Pekar. “He loves the game and definitely knows the game really well.” 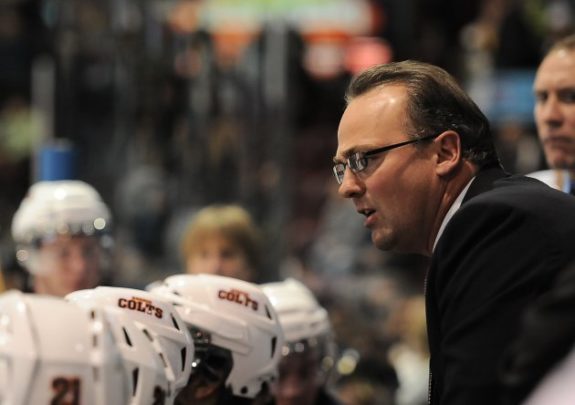 Coming up Through the Ranks

In 2017-18, Pekar notched 14 goals and 40 assists in 56 games for the Muskegon Lumberjacks of the USHL. It helped him earn USHL Rookie of the Year honors. He also donned his country’s sweater and was a key player at the 2017 Ivan Hlinka Memorial Tournament and the 2018 IIHF World U18 Championship, his team finishing second in both events.

Once drafted, it was thought Pekar was going to play in the USHL, and then in the NCAA at Miami University (Ohio). Pekar’s rights in the Canadian junior ranks were owned by the Barrie Colts, having selected him 108th overall in the CHL Import Draft. However, when rising star Andrei Svechnikov (40 goals, 32 assists in 44 games) left Barrie, it opened an opportunity for Pekar. He decided to make the move to the OHL, a fiercely competitive league this year.

Sabres general manager Jason Botterill has a history of favoring players coming through the NCAA ranks. Given Botterill’s familiarity with Hawerchuk and the strength of the team in Barrie, Pekar is in a good place. “I feel very comfortable with that situation,” said Botterill (from ‘For Sabres prospects Ukko-Pekka Luukkonen and Matej Pekar, the path to Buffalo goes through the Canadian Hockey League’, The Athletic – 9/12/2018)

The tenacious Pekar loves the game and strives to grow every day. More importantly, he has identified the type of player he wants to become. “I just want to play my game as much as I can and try to produce as much as I can,” he said. “My biggest goal is to develop into an NHL player as soon as I can.”