For over three decades, my most important role as an Investment Advisor was to reduce and mitigate investment risk while building client wealth. I achieved this by using a risk management technique called diversification. The goal was to develop a portfolio of securities that would meet the client’s tolerance for risk while achieving the rates of return they expected, to meet their financial needs.

NHL general managers have similar responsibilities. Their clients are the individual team owners with the most critical assets in the organization being the roster of players on the NHL team and their talent in the development leagues. General managers face the challenge of developing a portfolio (team) of players that will satisfy the expectations of their owners, work within the financial capacity of the owner to pay for the talent and mitigate the risks they are willing to accept to attract player talent.

General managers must also use the concept of diversification to build a successful team. Stanley Cup-winning teams are not created by attracting only offensively-gifted players. Role players who have “specialized” talents like defensive prowess, ability to kill penalties, shot blocking and face-off skills are essential attributes that contribute to overall team success. The analogy to draw here is that the team is similar to a portfolio of securities that generates a return to the investor, in this case, the team owner, while each player is comparable to individual securities that contribute to the overall success of the team.

While fans and the media tend to focus on the performance risk that players pose for team ownership, many other risks relate to the players that general managers must consider when selecting talent. The following is a list of risks that NHL team owners face when entering into contractual relationships with players: 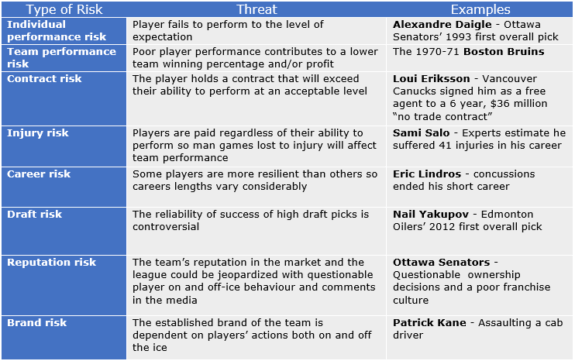 The mitigation of these risks is an on-going challenge for general managers. Player assessment is key to reducing many of these risks. Draft risk can be lowered by hiring a capable scouting staff and incorporating statistical analytics to assess a player’s strengths and weaknesses to determine how their abilities will fit into the current and future needs of the team.

Psychological assessments before the draft help organizations reduce the risk players can pose to the team’s reputation and brand. Physical tests, such as those conducted at the league combine, and individual team assessments can help mitigate injury, career and contract risks.

Constructing an NHL roster is similar to the building of a portfolio of securities with the risk/return profile of both being a major concern. Owners of professional hockey teams are considered either profit or winning percentage maximizers. Their organizational focus will determine how they will build their rosters, what they are willing to pay for talent and the risks they are willing to accept. They must decide if they are looking for reliability and consistency by developing players over time or are they willing to trade young, promising draft picks to acquire proven talent and sign high-priced free agents to win a championship today.

Individual team owners may elect to sign “risky” players for various reasons. The risk could take the form of inconsistent past performance or questionable on and off-ice behavior. Team managers and coaches may see value in these players because they believe the potential benefits of acquiring their services may exceed the risk.

Team officials may view the circumstances that a player is currently in with another club to be the reason for their poor performance. Two examples are Roberto Luongo and Ryan Kesler who have thrived since leaving the Vancouver Canucks and the Vancouver media scrutiny. They needed a “change of scenery” to breathe new life into their careers.

Another example of where managers are willing to accept additional risk is when they choose to sign a “rental” player before the playoffs. While the odds are usually high that the player will be lost to free agency at the conclusion of the season, they are willing to forego a potential asset like a current or future draft pick to acquire the services of a player who could be a significant contributor to playoff success. The risks are that the player’s performance will be below expectations and the potential disruption in the dressing room created with the acquisition of a new player at the end of the season.

Risk management for NHL general managers continues to be one of their most important roles. With the current team salary cap of $79.5 million, GMs are risking a significant amount of owners’ money in player contracts. Making a poor decision when acquiring talent could cost an owner a lot of money against the cap, restrict their ability to obtain a replacement player and negatively affect overall team performance and franchise profitability.