Well, it took until the final day of the regular season, but the matchups are now set for the first round of the Stanley Cup playoffs.

There’s nothing quite like the lead-up to the start of round one, where every team legitimately believes they can make a run. That being said, the Calgary Flames face a daunting task in the Anaheim Ducks. 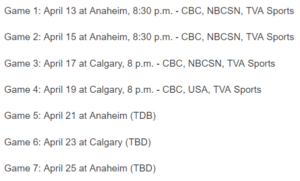 Every Flames fan knows the history behind this.  The 13-year regular season losing streak in Anaheim, the 0-for-2 record in playoff series against the Ducks, and the general history of being beaten to a pulp at the Honda Center.

Thankfully, history gets thrown out the window heading into the playoffs.  It doesn’t matter how past iterations of this Flames team came up short against the Ducks.  The only thing that matters now is whether or not Glen Gulutzan and his team can find a way to break through against a Ducks team that has managed to seemingly get in the heads of every member of this team.

The good news?  No pressure on the underdog.

As the NHL’s regular season nears its end, there is always a lot of chatter not only about what potential playoff matchups might be, but also who each team would most want to face come playoff time.

In some cases, it makes a lot of sense for teams and fans to be chasing matchups.  Case in point, the Toronto Maple Leafs’ failure to capture a single point in their final game sealed their fate as a presumptive minor speed bump for the Washington Capitals in round one.  Even just a single point for the Leafs last night would’ve pitted them against the Ottawa Senators instead, which would have been much more manageable.  So then, sometimes chasing those matchups can be worth the effort.

In the Flames’ case, however, it has looked all but certain over the past week or so that they were destined to face either the Ducks or the Chicago Blackhawks – easily the West’s best team.  With the Flames’ historical struggles against the Ducks, however, there has been a lot of talk about how perhaps the Hawks might be a better matchup for the Flames come round one.

However, while the Flames only managed to win one of five contests against the Ducks this season, they also only managed one win in three against a Chicago team that also boasts an unparalleled championship pedigree. Coupled with the tougher Central Division that Calgary would be forced to go through should they somehow manage to play David to Chicago’s Goliath, and the Flames’ best shot likely still lies in facing the Ducks.

While the biggest storylines we hear heading into the postseason are bound to be around some of the marquee matchups out east and the playoff debuts of Connor McDavid and Auston Matthews, it might not take long for the spotlight to shift over to this Flames and Ducks series.

Hardly strangers to bad blood already, the tension could easily boil over quickly after the last matchup between the two teams on April 4th. Things erupted in the third period after a controversial hit to the knee from Mark Giordano on Ducks’ rearguard Cam Fowler, who is now on the shelf for 2-6 weeks.

As is usual come playoff time, we’re not likely going to see much in the way of actual fights, but don’t be surprised if the Ducks not only target Giordano for the hit, but also come gunning for some of the Flames’ other, perhaps more fragile players.

It could get ugly, and fast.

April was a dark time in Canada last year, as – punctuated by the collapse of the Montreal Canadiens with Carey Price falling to injury – no Canadian teams managed to make it past game 82.

This time around, five Canadian teams have punched their tickets, and we can look forward to seeing at least one Canadian team in action every night for the next couple of weeks.

While you’re going to be hard pressed to find too many Flames fans ready to cheer on the boys just up the QE2, or Canadiens fans excited to cheer on the Leafs or Ottawa Senators, there will be plenty of opportunity for cross-conference rooting interests across the country.

While the Flames and Leafs are set to be major underdogs in round one, each one of the Oilers, Canadiens, and Senators head into their respective series as presumptive favourites, holding home-ice advantage.

Should each team manage to win their first round series, the second-round matchups would include Habs/Sens and Flames/Oilers.  As far as playoff double-headers go, not too shabby.

Well, there’s not too much schedule-dissecting to be done here.  It’s the Ducks. Game one goes Thursday night in Anaheim, with game two on Saturday before the teams head back to Calgary to play two more next week.

Considering the Flames’ perennial struggles in Anaheim, getting the split on the road to start the series is critical for Calgary.  Coming home down 0-2 against a Ducks team that has continually dominated the Flames would be a back-breaker for this team.

Thursday night is the perfect opportunity to quiet the critics and lay down a statement game, but one way or another the Flames absolutely must win at least one this week if they want to have any chance of playing into May.