With the Calgary Flames’ upswing into a rebuild, most of the attention thus far has been placed on the young, promising and extremely skilled forwards who are changing the face of a formerly veteran roster. Yet despite Sean Monahan’s incredible impact on the team during his first season in the big show, and the highly anticipated signings of prospect Johnny Gaudreau and draft pick Sam Bennett, there have been some much quieter changes happening on the back end that are sure to affect the Flames’ success in the upcoming season.

A major defensive move this summer was the signing of Deryk Engelland, the 6’2 215 lb blueliner formerly of the Pittsburgh Penguins. The signing garnered mixed feelings (mostly negative), as although Engelland is a rough-and-tough big body with veteran status that is beneficial to the team’s defense, the 3-year deal worth $2.9 million AAV is quite steep for a player of his caliber.

In his four full seasons with the Penguins Engelland played a little under 250 games, overshadowed by the team’s other notable and more skilled defensemen like Kris Letang, Brooks Orpik and Paul Martin. But his limited time on ice certainly did pack a punch (literally). Considered to be one of the league’s best fighters (who can forget his fiery bout with Toronto Maple Leafs tough guy Colton Orr in the 2013 NHL season, or the fight against the Philadelphia Flyers’ Jody Shelley in 2010 that established that he could roll with the best of them?), Engelland is sure to be an intimidating presence on the ice.

Sure, fighting may not be a key factor in winning games, especially for a team like the Calgary Flames, but it is a big morale booster, something that has undoubtedly affected the team’s ability to bounce back in games. Just ask Brian McGrattan.

And perhaps Engelland could take up a mentorship role of sorts to guide some of the Flames’ promising young D-men, like Tyler Wotherspoon, who despite having a lot of talent, could still use some crucial development time and will probably need to spend at least a season or two with the Adirondack Flames.
Down the line, Wotherspoon and guys like Mark Cundari, Pat Seiloff and Keegan Kanzig are sure to emerge and take over the lower spots on defense, but for now the Flames could use someone with NHL experience already on hand. Especially one who can play both defense and the forward position (albeit, not very well, but it’s nice to have the option). 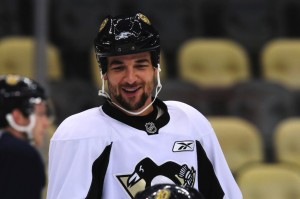 But even with the optimism that Engelland could fulfill these roles, and that his talents were not fully showcased because of his lack of playing time with the Penguins, it is the in-depth look at his stats with former teams, and the high price tag at which the Flames picked him up, that will hinder his full acceptance into the team from a fan’s perspective.

Engelland’s stint with the Flames, although at a high price, is relatively short, and can be good for the team for the time being. His signing, which many consider to have prevented the team from getting better a lot quicker, may also have kept the Flames in the running for Connor McDavid in next year’s draft. Calgary is still a few years away from being a competitive playoff contender, and by that point, Engelland could either be shipped away or have become a surprising X-factor to the roster and aid in the team’s eventual successes.

On a significantly brighter side, the Flames’ signing of goalie Jonas Hiller was the ultimate defensive improvement this summer, and with Joni Ortio also committing to the Flames for two years, the team finally has that solid goaltending situation they have been searching for since the retirement of Miikka Kiprusoff.
Engelland is just another truculent piece of the puzzle being put together by the curious mind of Brian Burke, and only time will tell whether he will be a piece that will fit or needs to be discarded.