CHICAGO — Goals by Andrei Svechnikov, Jaccob Slavin, Phillip Di Giuseppe and Calvin de Haan gave Carolina a four-goal lead early in the second period and the Hurricanes held on for a 4-3 victory over the Chicago Blackhawks on Thursday night that spoiled the NHL coaching debut of Jeremy Colliton.

Colliton became the 38th coach of the Blackhawks on Tuesday after Joel Quenneville was fired after 10 seasons with Chicago. Quenneville ranked second in NHL history with 890 regular-season victories.

Despite the coaching switch, Chicago got off to a sluggish, mistake-filled start and saw its winless streak reach six straight (0-5-1.)

Patrick Kane, David Kampf and Nick Schmaltz scored for the Blackhawks after they fell behind 4-0 in a quiet United Center, but the team’s comeback came up just short.

Colliton, who was promoted from Chicago’s American Hockey League affiliate in Rockford, Illinois, is the NHL’s youngest head coach at 33.

Lucas Wallmark had two assists for the Hurricanes, who snapped a five-game slide in the finale of a four-game road trip.

Scott Darling, traded to Carolina by the Blackhawks in April 2017, made 35 saves in his third start this season.

Chicago’s Corey Crawford blocked 30 shots as he faced ample tough chances set up by breakdowns in front of him.

Carolina led 3-0 after the first period.

Svechnikov opened the scoring 4:46 in, cutting across the crease and using a long reach to tuck in rebound of Jordan Martinook’s shot from the left circle.

Slavin scored his second goal in two games to make it 2-0 during a power play at 9:09. He poked in a loose puck from the crease after Crawford stopped two point-blank stuff-in attempts by Justin Williams.

Di Giuseppe increased it to 3-0 with 4:07 left in the first on a shot from the left circle after the Blackhawks failed clear their zone.

Crawford chopped his stick on the crossbar and broke it after de Haan scored from just outside the crease 1:20 into the second to extend Carolina’s lead to 4-0. DeHaan, a defenceman, was left open after he pinched in and took a nifty feed from Sebastian Aho from behind the net.

Kane cut it to 4-1 just over three minutes later, slapping in a puck that had been fired by Artem Anisimov from the slot and was trickling toward the goal line. 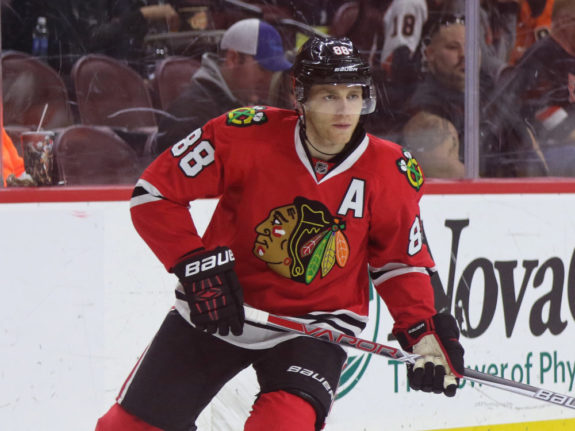 Kampf was credited with a deflection at 10:53 of the period that cut it to 4-2. Brandon Saad powered from behind the net to high in the slot, then turned and fired on net to create the chance.

Schmaltz narrowed it to 4-3 at 3:33 of the third when he carried the puck into the Carolina zone and beat Darling from the left circle.

NOTES: Blackhawks C Marcus Kruger suffered a left leg injury in the second period and didn’t return. . Petr Mrazek, the Hurricanes No. 1 goalie so far this season, missed his third game with a lower-body injury. … Saad played with a plastic full-face shield after taking a puck in the mouth in practice on Wednesday, then undergoing dental work and getting about 15 stiches. . Di Giuseppe had been recalled from Charlotte of the AHL on Wednesday and played in his third game this season. . Blackhawks F Chris Kunitz, D Duncan Keith and G’s Crawford and Cam Ward are older than Colliton. D Brent Seabrook, also 33, is just three months younger. . Quenneville had another year left on a three-year contract extension he signed in 2016 that pays him $6 million per year, second-highest in the NHL behind Mike Babcock in Toronto.

Blackhawks: At Philadelphia on Saturday.