Already close to halfway through the shortened 2013 NHL season, the Vancouver Canucks once again remain safely at the top on the North-West standings. Since the 2008/9 season, the Canucks have both won and dominated the North-West division consisting of the Edmonton Oilers, Calgary Flames, Minnesota Wild and Colorado Avalanche.

This may all change however, accordingly to recent speculation about a new 4 conference realignment proposal which may come into play as early as next season. The proposed new seven team Western conference group the Canucks would fall into includes;

While the Flames and Oilers remain Vancouver rivals of old, Canucks fans would be seeing much more of the three Californian teams as well as the Phoenix Coyotes (possibly with a move to Seattle in the future). Adding two recent Stanley Cup winning teams, Anaheim and Los Angeles to the mix, should make inter-conference games more challenging for the Canucks while creating new rivalries in the process.

Though a seven team conference will make the odds of winning the conference harder for Vancouver, this may be seen as a blessing in disguise, a true challenge and gauge of ability for the current group of players who often struggle when facing big name opponents.

Winning the North-West division, Western Conference and Presidents’ trophy in two consecutive years has not developed into Stanley Cup winning success for the Canucks, losing in the playoffs to both eventual Cup winners, Boston and Los Angeles, in the past two years.

A more challenging conference group may result in more grit and pressure in the regular season for the Vancouver team, which hopefully will translate into future playoff success.

News also broke recently of a potential move of the Calgary Flames farm team, the Abbotsford Heat to Utica, New York. The news was originally reported by a US sports blogger, stating on his blog;

“Here’s what we do know, according to a reliable source. A 10-year-deal has been struck with the Flames (to move the Heat to Utica)”

Since the report was posted, several media outlets such as CTV, The Province and the Vancouver Sun were quick to point out that while the Flames may be in talks with Utica, no official deal has yet been reached or announced. 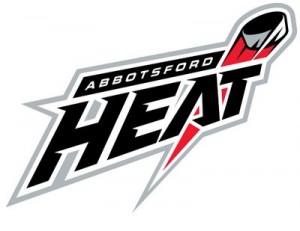 If the reports were true, this would come as big news for the Vancouver Canucks, who would see Abbotsford as a perfect location for their farm team, which just happens to be on the final year of a two season contract in Chicago. It has also been reported that while the Chicago Wolves are keen to renew this agreement, the Canucks are waiting on various factors before progressing with any talks.

With the Abbotsford Heat losing money each year, mainly due to being a rival Flames affiliate so close to Vancouver, switching alliances to the Canucks would be seen as an ideal situation for the Canucks, BC hockey fans and the Abbotsford AHL team.

The Canucks would have their crop of young players much closer to home to evaluate and call-up when needed, the fans would get to see the up-and-coming Canucks play especially important during these times of permanent sell-outs at Rogers Arena with the Abbotsford team almost guaranteed higher attendances through being a Canucks affiliate in BC.

Adding more fuel to the fire, back in August last year, Canucks owner Francesco Aquilini was rumoured to be interested in buying the Abbotsford Entertainment and Sports Centre, current home of the Abbotsford Heat.

Speculation pointed at the sale not going through due to the Calgary Flames farm team having the long-term contract with the arena but with the Heat potentially moving to Utica for next season, the Aquilini group may revisit the idea of both purchasing the arena and relocating the Canucks affiliate AHL team.