The funny thing about the Washington Capitals is their uncanny ability to seem like a different team almost every night. It is tough to tell what type of game Washington is going to bring; thus, earning them the title of “enigma” that I gave them earlier this season. Recently, their enigma status has translated into winning in a different way under different circumstances. Washington is no longer a one-dimensional team and has seemed to have the ability to find multiple ways to win — convincingly, too, at times.

For instance, I ventured from my nesting area of Washington, DC and followed the team to Canada for the last leg of their six-game road trip. My first stop was in Ottawa where I saw an unmotivated Capitals team play against the Senators. They didn’t play along the boards, they were not physical by any means, and unless they were on a power play, did not make many efforts to enter the offensive zone. It was quite a snoozer to watch, and it seemed as though Washington slept right along, getting shutout for the 10th time this season 2-0.

“That’s what I think was something that we lacked tonight,” said Caps forward Matt Hendricks about the lack of energy and physicality from the Caps. “Obviously they [the Senators] played last night. They were tired and we could have tried to take advantage of that a little bit more. I don’t think we did. We might have given the puck to Anderson a few too many times on our dumps.”

Hendricks then gave the Senators credit for taking advantage of the Caps’ disinterest in the game. “They’re playing well. They’re playing confident, they’re playing hard and they deserve some credit.”(washingtoncaps.com/Mike Vogel). 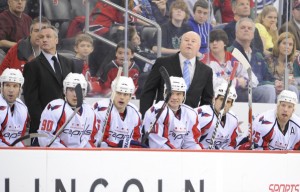 I then traveled to Montreal in preparation for the Capitals and Canadiens game at le Centre Bell, expecting to see a much more energized Caps squad. All of a sudden, the “gutsy” 5-4 shootout win in Philadelphia against the Flyers accumulated with a 2-0 dud against a last place team and then a loss against a Habs team that just lost 7-0 to their rival Boston Bruins would be examples of reason for concern for the Capitals.

However, from the start of the Canadiens game, I saw the Caps entering the Habs’ zone and creating plays in front of Carey Price. I heard boards and glass rattling, and the players communicating with each other on the ice. It was, essentially, a different team than the previous night. The much improved play from just 24 hours prior turned into a 2-0 victory.

Whether it was because Braden Holtby was recalled to play against the Canadiens as Michal Neuvirth was deemed ill and could not start, that the Caps decided to play hard, or they knew that they needed to finish the road trip on a positive note, the Caps came out to play and used a combination of constant offensive pressure and an outstanding performance from Holtby to take the two points back to DC.

This display of difference in play under different conditions and scenarios was seen throughout the later parts of the year, most specially on this recent road trip. The way Washington was able to score at will against the Canadiens the first go around, to the Devils 3-0 victory playing almost a stifling trap style. In Philadelphia the Caps had a 3-0 lead on the Flyers and lost it, but were able to tie the game up and win in the shootout, giving a testament to not surrendering the game despite surrendering the lead at one point. Then to close out the trip, the Caps recover from losing a trap game to Ottawa by beating Montreal.

With some important Caps still out with injuries (Jason Arnott, Mike Green and Alex Ovechkin), the Capitals are continuing where they left off when they had these players on the ice. They have found ways to remain positive and maintain the chemistry to create the opportunities they have been getting all year. Also importantly, in light of the sporadic injuries in net for the Caps, their three-goalie system seems to work in their favor, as Holtby’s performances of late have earned him trust in must-win situations like last night against the Habs and even Kevin Weekes’ praises on Twitter. Even though Holtby was reassigned earlier today, he has also been a factor in allowing the team to  continue business as usual when injuries to their goalies occur.

It has been a year of adjustments for Washington the entire campaign. The Capitals are still considered an enigma in my eyes, because you never know which team you’re going to get on a given night. However, instead of a team that has no identity, the Caps have taken to heart this title of “enigma” and use it to their advantage to find many different versions of a win. It certainly makes things more difficult for teams to plan against in the playoffs, and could be used as a new advantage for the Caps in the Quest for the Cup.

Angie represented The Hockey Writers at the 2011 NHL Winter Classic and is credentialed for Washington Capitals home games. She is a NHL Contributor for SB Nation’s “NHL Scores & More” and covers high school hockey for The Washington Post. Angie attended American University where she studied broadcast journalism.