After all the hype, advertisements, television series, concerns over weather and delays, the 2011 NHL Winter Classic finally took place at Heinz Field. Just as viewers and fans expected, this game proved to live up to the expectations and hype in a 3-1 victory for the Washington Capitals over the Pittsburgh Penguins.

In a rainless first period, despite the extended stoppages to smooth off the ice (game-time temperature was listed at 51 degrees Fahrenheit), the energy level between the two teams remained high. As both teams buzzed in the offensive zone, they were rewarded with power-play opportunities. Just past the halfway point, Capitals defenseman John Erskine laid a huge hit on Penguins center Michael Rupp, and immediately, the two dropped their gloves. It seemed as though no team had the advantage, however, as the play continued to be even through the rest of the period with both teams getting multiple chances. The shot total by the end of the first was 16-12 Penguins, but it remained scoreless.The second period, although less volatile, maintained the energy of the first period with more quality chances. The first Penguins rush two minutes into the second frame resulted in an Evgeni Malkin goal to put Pittsburgh up 1-0. The Penguins seemed as though they were about to take control of the tempo, especially after the Caps received a penalty for goalie interference. However, once the Caps got their second power play of the game, Mike Knuble bumped in a goal to tie the game at 1-1. Washington then had the upper hand in play but were missing easy opportunities — until Eric Fehr got one in.”I think Johansson turned the puck over behind the net, and I just went in front and got a good pass and was able to put it in,” Fehr said about his goal.

The end of the period gave the Penguins some close chances and even had a goal waived off because of contact with the goalie, ending in a goalie-interference penalty for Pittsburgh. Pittsburgh head coach Dan Bylsma argued that the goal should have counted because to him, Mike Green had pushed Michael Rupp into Caps goalie Semyon Varlamov but submits to the disallowed goal because, “It’s a split-second decision, and he makes a decision that affects the goaltender.”With a 2-1 Capitals lead, the rain started to fall much heavier, and the ice became significantly more difficult to maneuver on the ice.Sidney Crosby said, “I think when it started to come down pretty good there, you could see the puck started to bounce even a little bit more.”Eric Fehr said, “It was really tough to make any passes out there.”Evidently, it was even difficult to get the puck out of the zone, as Pittsburgh spent a good portion of the third period in Washington’s zone because of the puck sloshing on the wet and melting ice. Nonetheless, Fehr found a way to score as he took  advantage of Marc-Andre Fleury’s poor puck-handling and scored to give the Capitals some insurance with a 3-1 lead. Alex Ovechkin almost scored a fourth goal for Washington, but it was waived off because of incidental contact with the goalie. Through strong goaltending and defensive effort, and as Caps winger Mike Knuble said, the players “gave a crap,” the Capitals ended up winning the second of four games with the Penguins 3-1.Almost uncharacteristically, the Caps played a “grind-it-out game,” according to Caps head coach Bruce Boudreau because “after we were on the ice yesterday, it didn’t look like the ice conditions would be that great. So we knew the fancy tic-tac-toe stuff wasn’t going to work.” This style deemed successful enough for Washington, and as John Carlson noted, “Whenever you’re playing a sound game defensively, it seems like you get more chances offensively anyway.” Of course, as much as this was a spectacular event for hockey fans and non-hockey fans alike, the two teams will move on, even though Boudreau says that “we’re not denying that it was more than just two points.” Evgeni Malkin said after the game, “It’s one game and of course if we won we’d celebrate, but it’s not the [Stanley Cup] Finals.” Malkin added, “We play two more times and maybe we’ll see them in the playoffs too.” 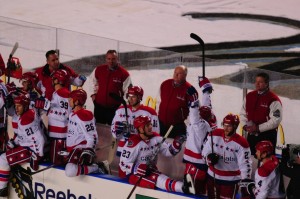 The HBO cameras are gone, all the extra media members and attention are not here anymore. We’re back to indoor hockey for the rest of the year. As Dan Bylsma said, which can be said for both teams, “We’ll have to do our best to get back to normalcy, which is 41 games or 42 games left in our hockey season.”

The Capitals’ next game will be at home on Tuesday, Jan. 4, against the Tampa Bay Lightning. The Penguins will also take on the Lightning for their next game Wednesday, Jan. 5.

Angie represented The Hockey Writers at the 2011 NHL Winter Classic and is credentialed for Washington Capitals home games. She is a NHL Contributor for SB Nation’s “NHL Scores & More” and covers high school hockey for The Washington Post. Angie attended American University where she studied broadcast journalism.