SUNRISE, Fla. — Justin Williams had two goals and an assist and the Carolina Hurricanes rallied for a 4-3 victory over the Florida Panthers on Thursday night.

Nino Niederreiter had a goal and an assist, and Justin Faulk also scored a goal Florida, which has won seven of its last nine games. Peter Mrazek made 27 saves. 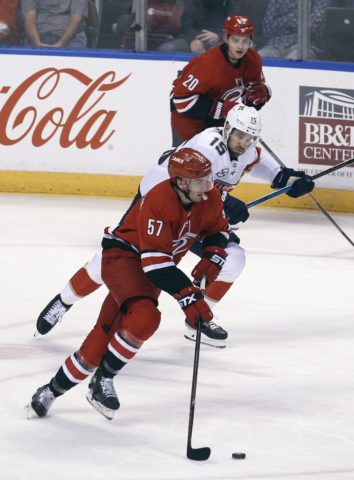 Aleksander Barkov, Evgenii Dadonov and Jonathan Huberdeau each had a goal and an assist for the Panthers, whose three-game winning streak was snapped. James Reimer stopped 21 shots in his fourth consecutive start.

The Hurricanes tied the score 3-all on a power-play goal by Faulk, whose shot from the right circle beat Reimer 19 seconds into the third period.

William’s second goal, a shot from right circle that went high into the net, gave Carolina a 4-3 lead at 2:16 of the third.

The Panthers successfully killed off a two-minute 5-on-3 power-play early in the third.

Trailing 2-0, the Panthers scored three goals in 4:15 of the second.

The Panthers closed to 2-1 when Jayce Hawryluk passed from behind the net to Dadonov in the slot. Dadonov slipped the puck past Mrazek at 6:53.

Barkov’s power-play goal tied the score at 2. Dadonov passed to Barkov on the right side of the crease. Barkov redirected the puck into the net with the shaft of his stick at 9:49.

Huberdeau gave the Panthers a 3-2 lead when his shot from the slot beat Mrazek on the stick side at 11:08.

The Hurricanes took a 1-0 lead on a bizarre goal by Williams at 5:12 of the first. Williams was positioned in front of the net when Brett Pesce took a shot from the high slot that hit Williams in the right side of the face and then went into the net. Williams fell face down on the ice, but was able to leave on his own. Williams returned to the game shortly after.

The Hurricanes stretched their lead to 2-0 at 4:35 of the second when Niederreiter poked in a rebound.