Williams scored his 10th goal of the season 15 seconds after leaving the penalty box to make it 3-2 with 17:18 left. The 37-year-old flipped a backhand past goaltender Thomas Greiss with an assist from Greg McKegg. It was his 299th career goal.

Jaccob Slavin made it 4-2 with a power-play goal at 18:53 before Brock Nelson scored his second of the game for the Islanders at 19:01.

The Hurricanes held on to win their fifth straight. Curtis McElhinney made 28 saves for Carolina, which also got goals from Saku Maenalanen and McKegg. 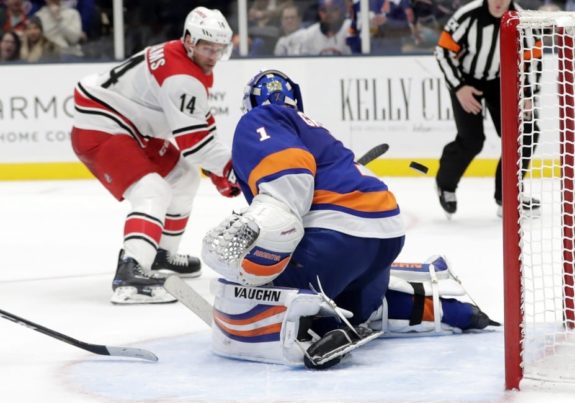 Rookie defenceman Devon Toews tied it early in the third period for New York. It was his second goal since being recalled from AHL Bridgeport.

Nelson opened the scoring 13:42 into the first period, but Carolina tied it when rookie Maenalanen scored his first goal at 15:10. The 24-year-old Maenalanen played his fifth career game after signing with Carolina last May as a free agent. He previously played for Karpat of the Finnish League.

McKegg put the Hurricanes ahead with six seconds left in the first, knocking a loose puck past Greiss in the crease for his second goal of the season.

Jordan Eberle appeared to tie it for the Islanders early in the second period, but Valterri Filppula was ruled offside before the goal.

McElhinney also made a sprawling save on Ryan Pulock alone in the slot in the waning seconds of the middle period.