We learn about concussions all the time in hockey these days. I have written about the subject, as have many others. It is indeed a serious problem.

Yet why is there so much concern placed on the health and welfare of the hockey players themselves, yet such callous indifference and abandon when it comes to concussion risk –and the hockey fan?

Concussions in the Stands

This danger is no more evident than during one of the many, (many, many) interludes that arenas increasingly utilize for in-game entertainment for the fans. The prevailing theory seems to be that if one does not fill every second of time during a hockey game with a famous guitar riff, animated Zamboni races, a silly and rarely relevant scene from a Jim Carrey movie or any half-assed game with a prize pack involved, that these raucous hockey fans might rebel: litter the ice with debris, brawl with their neighbors, or even, at worst, experience a brief moment of quiet reflection before the next puck drop.

The interlude in question is of the ‘-cam’ variety, best known among them being the Kiss Cam. While the Kiss Cam presents its own threats, here we’re referring to the Head Bang cam. Although not a hard-fast rule, Quiet Riot’s 1983 hit “Metal Health” accompanies the Head Bang cam, and fans are encouraged to ‘rock out’ and ‘bang their heads’ as though attending a modern-day rock concert.

Behold exhibit A. Hoping for brief stardom on the Jumbotron and for a reward in the form of a coupon he’s likely unable to use, such as a week of free airport parking, this young fan puts it all on the table. He gives it 110 percent, like his hockey heroes. 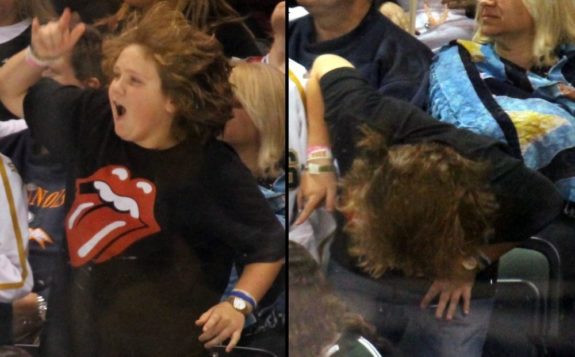 Alas, he did not make a Jumbotron appearance and he did not win any free parking.

Was he ushered into a quiet place for a pre-determined amount of time, as per pro hockey protocol? No. Was he administered any sort of cognitive exam to compare against a baseline exam to determine concussion severity? No. In fact, there is reason to believe baseline concussion testing is not even offered to fans in the first place.

A Menace to the Public Health 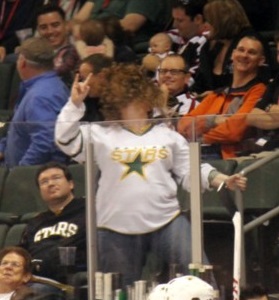 Why are arenas encouraging what has been termed in one medical paper “self-injurious head banging behavior”? This is especially disconcerting when one considers the threat of developing the brain disease Chronic Traumatic Encephalopathy down the road.

The medical literature has already documented cases of CTE in chronic head bangers. Must we wait for the literature to document cases of CTE among chronic hockey game Head Bang Cammers before something is done?

Professional hockey leagues should consider shutting down the Head Bang Cam before it explodes into a full-blown public health catastrophe.

And while they’re at it, they might also shut down the practice of filling every single available nanosecond of non-playing time with Iron Maiden riffs and scenes from Dumb & Dumber. The game of hockey should be entertainment enough. If it isn’t, you’re doing something wrong.