Yes, Corey Crawford is hurt, and Chicago’s wondrous goaltender depth will now be on full display for the world to see. 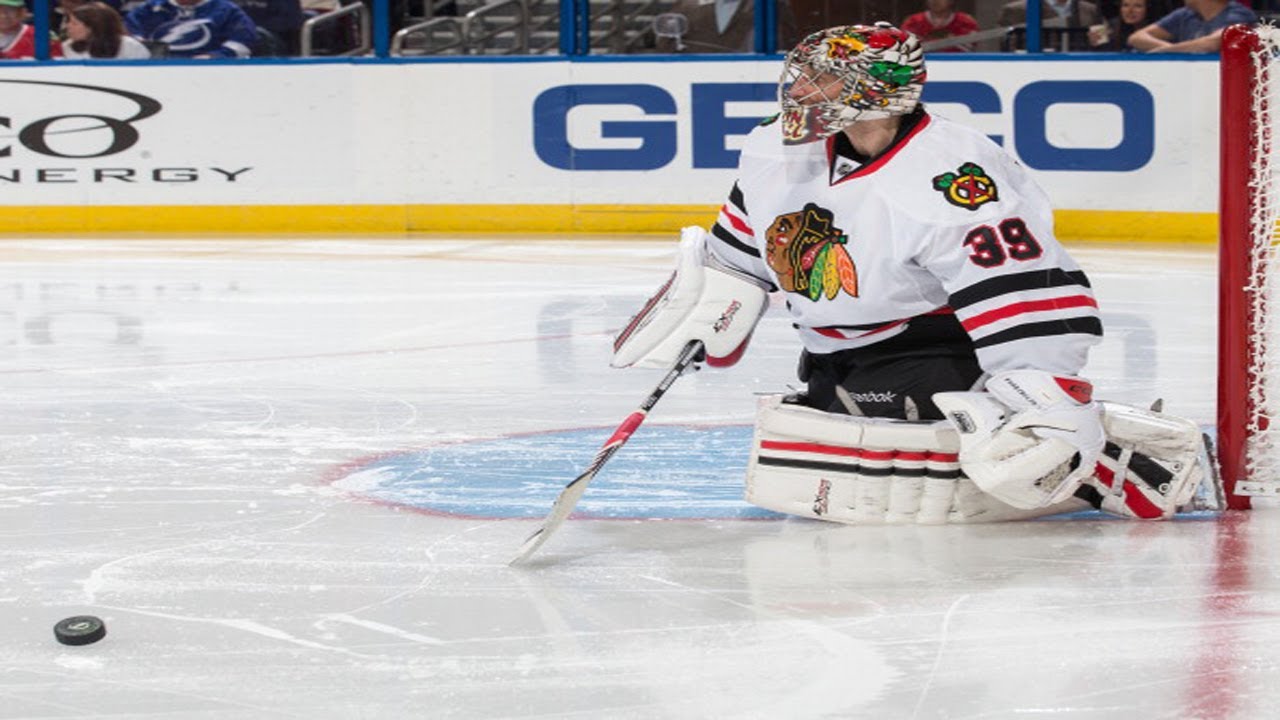 As much as we may say “he’s old,” “he sucks,” or “he drank too much Russian vodka again“, he has definite heart. Respect.
With that said, it’s time to introduce the two new heroes of our time.

Antti Raanta: The Brave and Eminently Glorious Savior of the Chicago Blackhawks

Hawks fans, meet your new starter.
The guy was in Rockford a month ago, living a life of bus trips, 3 games in 3 nights, and entirely unremarkable hockey just as the IceHogs have reliably been giving their fans for years.
Today? He boasts a 4-0-1 record and leads the league in the all-important category of “average times ran into or fallen on by opposing players per game.”
I’ll be serious and forthright for just a minute. Raanta’s been impressive. I don’t care who you are or what you’ve looked like via the eye test – a .924 save percentage and 2.14 goals against average are very strong numbers.
From what I’ve seen from Raanta, I’d tell you that he’s a small goalie who relies almost entirely on his reflexes to make saves. You’ll notice that a lot of shots just “happen to hit him,” as the moderately nuts Pat Foley often says. Raanta is small but makes up for that with athleticism – in that sense, he reminds me a lot of Tim Thomas (minus the crazy flop-around-like-a-fish goaltending style).
As far as weaknesses are concerned, Raanta’s positional play stands out as below average, especially if you’ve watched a lot of Corey Crawford (whose positioning on shots is probably his best asset). Also, Raanta’s five-hole coverage is pretty dreadful – this was particularly evident in the December 6th game at home against Anaheim.
Finally, Raanta tends to let fairly weak chances by him a bit more often than we’d all like.

Raanta: "Have to practice the stickhandling. I had too much problems, and then we have bad situations going on in our own zone." #Blackhawks

#Blackhawks G Antti Raanta: "If the forwards want to score points, that's fine for me. … It's pretty nice to be a goalie on this team."

The one Eddie Olczyk joke that people other than Pat Foley laughed at.
Next topic.

Kent Simpson: The Backup to the Brave and Eminently Glorious Savior of the Chicago Blackhawks

Y’know, I’ll be honest. I’m in the dark on Kent Simpson. The only things I have to say here are that he bears a vague resemblance to my older brother – who none of you know, so why am I even bothering to say that here – and that his stats in the AHL this season aren’t very promising.
He does have an interesting youtube channel, though!
Wait… nevermind, that’s just a random old guy.
Hm. I’m really fishing here.
Whoa, hold on. Did you see that guy’s youtube handle? “Prophetkentsimpson.”
IT HAS BEEN DECIDED. KENT SIMPSON SHALL HEREAFTER BE REFERRED TO ONLY AS “PROPHET KENT SIMPSON.”
Okay, I really have absolutely nothing. Raanta will be getting most of the starts anyway, including tonight – or so Marky says.

Perhaps one day I will expand my Twitter world beyond Lazerus and Kuc, but today is not that day.
Whatever the case, I promise to all you loyal, great people that have actually read through my incessant rambling in this article that I will give you a rambunctious, ridiculous PROPHET KENT SIMPSON update after he plays his first game. It will be dazzling, it will be illustrious, it will be utterly and completely magnificent.
Unless that game is tonight, because finals, man.
This is (supposed to be) a hockey article, so I’m going to get back on that route now.

How Does Crawford’s Injury Make the Blackhawks Better?

Simple. The Hawks have been playing lazy, unfocused defensive hockey all year long (and, indeed, Crawford’s numbers have suffered for it). They have the most goals against of any NHL team currently in a playoff position.
Crawford getting hurt forces them to get it together. The Hawks no longer have their Conn Smythe-deserving six million dollar beauty between the pipes. Nobody left who can to some degree cover for what has been a porous defense.
In this sense, the injury is a boon for the Blackhawks. Elite team defense was what made them so dominant last season, and it’s been missing so far this year. The offense has done an admirable job picking up the slack, but scoring 4 or 5 goals per game to win isn’t a sustainable route to success.
Crawford’s been out of the lineup for just one game so far, and the results are already promising. The Blackhawks delivered one of their best defensive performances of the season in a 6-2 pasting of the Dallas Stars. Don’t let the seemingly equal 33-29 shot differential fool you – Chicago thoroughly owned the puck in the first two periods and chose to sit back and play hockey’s equivalent of the “prevent” defense in the third with a huge lead.
A renewed focus on positioning in the defensive zone, pressuring the puck, and more consistent effort will prove to be very important in getting the Blackhawks where they want to go. The team will likely lose a few games here or there that they would not have dropped with Crawford, but such is the reality of losing your #1 goaltender. Fortunately for the Blackhawks, there is an immediately obvious silver lining. More focused defensive play may well mean the difference between another deep playoff run and an early-round exit for Chicago this spring.
Still. The locker room will be starkly different for a couple of weeks. There is no replacing the paramount charisma of Corey Crawford. 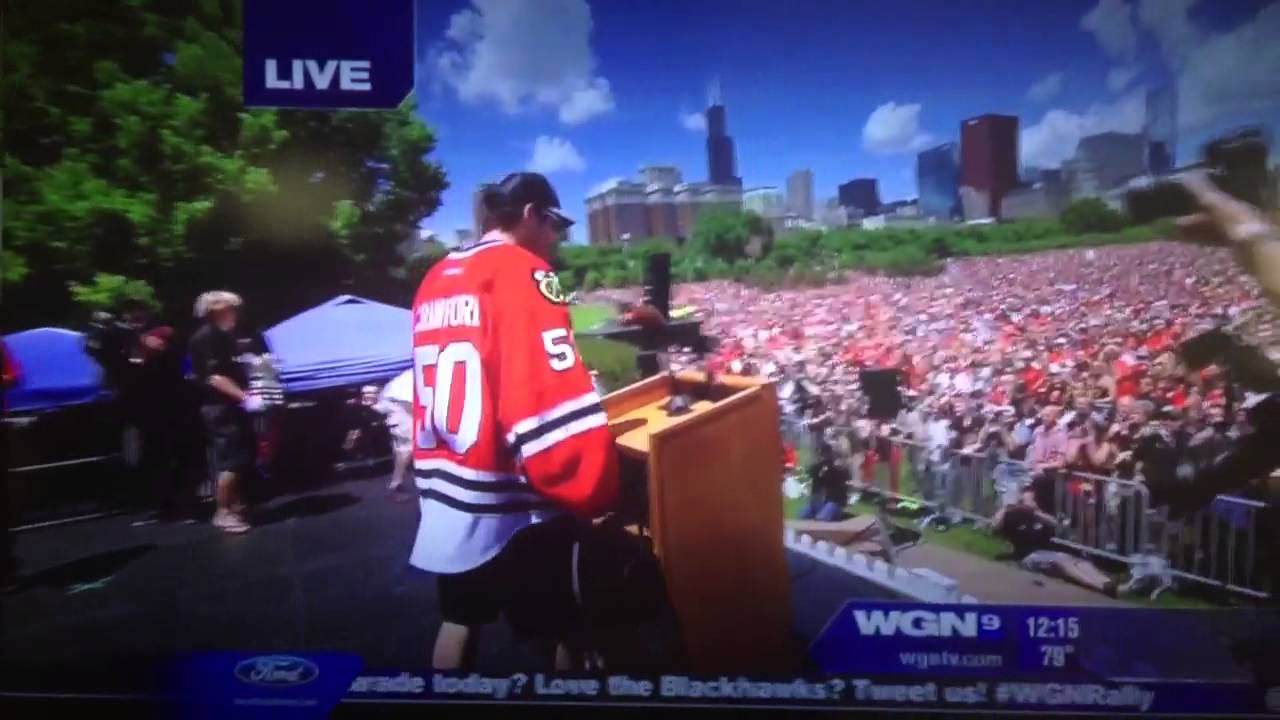 1. Remember how many people used to theorize that Crawford was secretly a bad goalie in disguise? Put differently, remember last year?
Yeah, I remember last year too.
2. Patrick Kane is razing the NHL and his name has joined the Hart Trophy discussion.
3. Joel Quenneville’s response to any question about anything at all: Mumble mumble mumble lower-body… mumble he has a lower upper body… mumble body injury… mumble/grunt hybrid… day-to-day.
4. ALSHON JEFFERY.