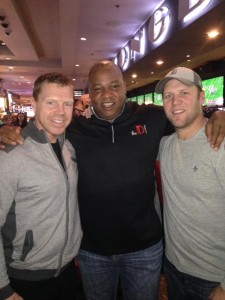 Hockey and Vegas? Vegas and Hockey? The debate is on whether or not an NHL team belongs in sin city. Is the party atmosphere too enticing to NHL players? Would it only be a matter of time before there was a gambling scandal? I catch up with former NHL/IHL tough guy turned Casino VIP host, Darren Banks, to get a “local’s” point of view on expansion in the wild west.

THW: Darren, before we start talking Las Vegas, I would like to talk about you as a player. You were born in Windsor and played your junior hockey in Ontario, correct?

DB: I played junior all over Ontario. I bounced around in the OHL from team to team, but ended up playing the majority of my hockey in Jr. B in Windsor. After junior, I went on to play at Brock University where I managed to put up some numbers and grab the attention of some scouts.

THW: What did you major in at Brock University?

THW: Let’s move on to your pro career. You got your start with the Knoxville Cherokees in the ECHL. Can you tell us more about that?

DB: My first year of pro, I signed with Knoxville and had a really good season. I was called up to the IHL for a handful of games and ended up signing with Calgary the following year.

DB: I had a blast playing for the Detroit Vipers in the IHL. We had really good teams in the mid 90’s and of course me growing up in Windsor, meant it was close to home. I also enjoyed my time in Las Vegas with the Thunder. I can’t thank Chris McSorley enough for bringing me in.

THW: Okay, you mentioned Vegas, so we have to stay with that topic. After your stint in the NHL with Boston, you spent parts of two seasons in Las Vegas and are now back there working as an Executive Host at The D Casino. Tell us the story behind how that came to fruition.

DB: Playing for the Las Vegas Thunder was a total blast. They had great fans and there was a great group of guys on that team. I loved playing in Vegas and everything that came with it. We did have a good time, but nothing ever got out of hand. After I was done playing, I returned to Canada and was working for CP Rail when I ran in to an old friend from Michigan. She told me that her husband owned two casinos in Las Vegas and would be interested in having me come down and work. I met her husband Derek and he offered me a job as an Executive Host at The D Casino. I quit CP in 2011 to come down here and I’ve never left.

THW: Describe what you do for the casino as an Executive Host?

DB: I’m the guy who you call to get deals, packages or skip the line at one of the clubs. I had Jim and Larry Playfair down here two days ago and it was a blast. You wouldn’t believe the guys who come in to say hi. Mel Angelstad has been down a few times and I do my best to take care of him. It is interesting that the NHL Alumni doesn’t really promote that I’m down here. I was a Boston Bruin and this is Vegas, I would love to do more with them.

THW: You raise an interesting point about the NHL and Las Vegas. We keep hearing about all the negatives in terms of putting a team in Vegas. Obviously, you are a bit biased but how do you feel about a team starting up down there and would it thrive?

DB: Listen, I was at the MGM last year for the Kings vs. Avalanche game and the place was packed. Believe it or not the locals down here do follow the team in the ECHL. I still get recognized at fundraisers or even when I’m just out on the town from my days with the Thunder. The fan base is not an issue.

THW: So you’re saying that fan support would not be an issue- what about the player’s behaviour off-ice or the party lifestyle that comes with living in this town?

DB: Its 2015, you can be in Edmonton, Calgary or New York and if you want to party, you’ll find one. These players now are much more regimented than we were. They are very aware of who is around them and the whole social media aspect of it. I had PK Subban and Sidney Crosby down here last year and it wasn’t like they were jumping on tables. All I can say is that I’m happy there weren’t cell phone cameras when I was their age.

THW: In terms of financial backing can you speak to who would be willing to shell out the money to bring a team here?

DB: I don’t know where to start. The line would be long. I know my boss Derek Stevens is advocating for it, along with Bill Foley and the Maloofs family. The line-up for potential owners, investors and sponsors would be out the door. They would be buying tickets, boxes and suites as fast as they were available. Think about it, people in Toronto could fly down here for two days in the middle of January and golf eighteen holes, eat dinner, go to the game and then hit a club afterwards. The clubs down here don’t really open or get going until 11:30pm anyway. The hotels could offer packages with flights, tickets and rooms for close to what a Leafs fan with a Platinum seat pays in a night. It’s a no brainer.

THW: Is there anything else that fans of the NHL need to know about Las Vegas and why a team should be there?

DB: The bottom line is that people here enjoy hockey. They supported the Thunder and they support the Wranglers. We have a new arena being built right on the strip. Our downtown is starting to pick up again and we are trying to bring back the “Rat-pack” days. The potential ownership is excited and they are already talking about doing season ticket drives. If there is one thing I know, its hockey towns. Boston is one, Detroit is one and Las Vegas has the potential to be one.

THW: One last question Banksy, my brother is getting married at the MGM in September and I’m the ‘Best Man’. Do you do bachelor parties?

Darren Banks played 20 games with the Boston Bruins from 1992-1994. He works at The D Casino, located at 301 Fremont Street in Las Vegas, Nevada. If you’re ever in town, make sure to swing by and say hi.