It’s interesting how one date can have different meanings to different people: One couple’s wedding anniversary is the date another couple’s divorce was finalized, your birthday is the date someone else passed from this world, and so on. For hockey fans, December 15, 1925, is an historic date with dual meanings, largely depending upon which side of the U.S. – Canada border those fans reside. South of the border, 12/15/25 is a red letter day, the moment hockey truly took root in the U.S. and began to spread from sea to shining sea. North of that double-thick line on the map, it’s the day Canada’s “National” Hockey League died. Ninety years later, the aftershocks of that momentous day continue to rumble across North America. Somewhat surprisingly, cultural attitudes expressed back then are still given voice today. Hindsight is 20/20, but nobody present at the time anticipated the seismic shift in the hockey landscape wrought by the first NHL game in New York City.

When the National Hockey League was founded in 1917, it consisted of four teams in two Canadian provinces: the Montreal Canadiens, Montreal Wanderers, Ottawa Senators and Toronto Arenas. By early 1923, the four-team NHL had lost the Wanderers and gained the Hamilton Tigers, while Toronto’s team was now called the “St. Patrick’s.” The NHL wasn’t the only professional hockey league in Canada, and they battled annually with teams from the Pacific Coast Hockey Association and Western Canada Hockey League for the Stanley Cup.

In addition to competition from their cross-country rivals, NHL owners were concerned the United States Amateur Hockey Association might turn pro and siphon off Canadian hockey talent, driving up player salaries and relegating them to minor league status. To keep that from happening, the league in early 1923 granted would-be owner Thomas J. Duggan options on two franchises, to be located in Boston, New York or Brooklyn. Ruling out Brooklyn due to the lack of a suitable arena, Duggan quickly came to an agreement with the Boston Arena for one franchise, then turned his attention to New York.

The importance of New York to the National Hockey League cannot be overstated. In the “Roaring Twenties,” New York’s roar was loudest. The biggest boomtown the world has ever known was awash in illegal (since 1920) booze and powered by previously-unimaginable amounts of money, both from the stock market and the local real estate market. The NHL knew a successful New York franchise would cement the league’s status as the premier North American professional hockey league. To achieve that success, Tom Duggan knew he’d have to get his franchise into the city’s only suitable venue, Madison Square Garden. For that, he’d need Tex Rickard, America’s top sports promoter, to buy in.

The Cowboy and the Garden

George Lewis “Tex” Rickard was an honest-to-goodness Texas cowboy, making his first trip up the Chisholm Trail with a herd of cattle at the age of eleven. After a youth spent in the saddle, Rickard entered adulthood determined to make a fortune, that he might avoid doing the backbreaking manual labor of a cowboy ever again. From the Klondike, Alaska and Nevada gold fields to the Texas oil fields, South African diamond mines and the lush, green grazing lands of South America’s Gran Chaco, Rickard chased wealth in all its forms, with varying degrees of success.

Along the way, the lanky Texan discovered he had a knack for sports promotion. He built his reputation by promoting championship boxing matches with ever-increasing success, capturing the world’s attention in 1921 with the Dempsey-Carpentier bout in Jersey City, New Jersey, which drew 90,000 spectators and generated the first million-dollar gate in history.

After the First World War ended, Tex moved to New York, seeing in the city a boomtown bigger than any he’d ever known, and he’d known quite a few. Since 1920, a group led by Rickard and circus magnate John Ringling had controlled Madison Square Garden, the city’s aging but iconic entertainment venue. When Tom Duggan came calling in early 1923, Tex was already (quietly) searching for a suitable site on which to build a new “Garden.” Though initially hesitant to bring to MSG a sport with such a limited following in the city, Rickard agreed in April 1924 to introduce NHL hockey at the old Garden that fall, with the expansion Boston Bruins beginning play at the same time.

Rickard’s and Duggan’s plans were soon derailed, however. In June, the New York Life Insurance Company, owners of the Garden, announced their intent to terminate Rickard’s lease and raze the edifice to put up a new high-rise office building. The same day New York Life made their plans known, Tex purchased a piece of land on the west side of 8th Avenue, between 49th and 50th Streets, and set to work building a brand-new arena. It wouldn’t be ready until late 1925, though, so the NHL played the 1924-25 season with just one American team (the Bruins) and five Canadian clubs (the Montreal Maroons also joined the league in 1924-25). 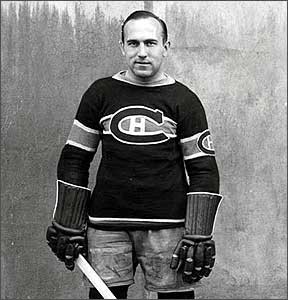 Howie Morenz, “The Stratford Flash,” scored a goal in the first NHL game in New York.

Until the puck dropped in Manhattan that chilly December night, Tex Rickard had no idea whether New Yorkers would embrace hockey or not. Keeping his fears to himself, the Texan did what he did best, promoting the contest as if it were the deciding game of the Stanley Cup Final. Rickard insisted on the defending NHL champions, the Howie Morenz-led Montreal Canadiens, as the opponent and the league obliged. To play on nationalistic tendencies, New York’s expansion team was named the Americans and wore star-spangled sweaters. The promoter even arranged for the winning team to receive the Prince of Wales Trophy, to keep for the remainder of the season.

Rickard knew well that the masses would eagerly follow in the footsteps of the social elite, so he made the first hockey game at the new Garden a high society affair. The next day, the New York Times would run a multi-column story listing the myriad celebrities, politicians and captains of industry in attendance. Without a doubt, it was the most overdressed crowd for a hockey game in history: The lower bowl and boxes were filled with men in white tie and tails and women in beautiful evening gowns and furs.

Before the puck dropped, Rickard staged an elaborate pregame ceremony, featuring Canada’s Governor General’s Foot Guards Band and the West Point Cadet Band marching (carefully) around the rink. The bands came to a halt facing each other at center ice. The Canadians played God Save The King, the West Pointers responded with The Star-Spangled Banner, New York Mayor John F. Hylan dropped the puck for the ceremonial opening faceoff, and the game was underway.

Seven future Hockey Hall of Famers (six players and one referee, Cooper Smeaton) took to the ice that historic night. One of them, Americans winger Wilfred “Shorty” Green, beat Montreal goalie Herb Rheaume to score the first goal at Madison Square Garden. Albert Leduc and Billy Boucher answered in the second frame for the Canadiens, and Howie Morenz delivered the final blow in the third period, sliding the puck past New York goalie Vernon “Jake” Forbes.

Death of the “National” Hockey League

Rickard didn’t watch much of the game itself; he was too busy watching the crowd. As the newly-minted fans roared their approval of each goal and bodycheck, Tex took note. When the game receipts were tabulated, the total came to $44,000. Rickard, who had hoped to make $8,000 on the night, was astounded. Almost immediately, he decided that if New Yorkers liked one hockey team, they would love two teams. The Americans, though operated by MSG, were owned by Tom Duggan and notorious bootlegger William V. “Big Bill” Dwyer. Under the lease agreement between the Americans and MSG, the Garden ran the team and received fifty percent of the gate. If MSG had its own team, Rickard reasoned, they could keep one hundred percent of the gate. Less than two months after opening night, the Garden gave up operational control of the Americans and began pursuit of a second NHL franchise for New York. That team, nicknamed “Tex’s Rangers” in the press, would make their Garden debut in November 1926.

Tex didn’t stop there. He’d been a “boomer” and a dreamer all his life, and the success of pro hockey in New York brought his dream of a sports entertainment empire into sharp focus: He would build a chain of “Gardens” across the United States and put an NHL team in each one. The promoter quickly announced plans to build Gardens in Chicago, Detroit and Pittsburgh, as well as to buy and renovate an arena in Philadelphia. At the same time he was pursuing the Rangers franchise, he allegedly attempted a “straw man” purchase of a franchise for Chicago. For many on the NHL’s Board of Governors, the Texan had gone too far. The league quickly made it clear to Rickard that he could build all the arenas he wanted, but he could only own one team.

Due to New York’s status as America’s cultural center, the initial success of the Americans inspired hockey-minded men of means in other cities to pursue teams of their own. In the spring of 1926, the league received applications from Detroit, Jersey City and Cleveland, in addition to New York and Chicago. In 1925-26, the NHL already had a delicate balance of four Canadian and three American clubs (the Pittsburgh Pirates had also joined the party). In addition to concerns about expansion driving up player salaries and diluting the talent pool, some Canadian owners worried about losing control of the league if American teams outnumbered their Canadian counterparts. In his book, The NHL: A Centennial History, author D’Arcy Jenish details a heated BoG meeting in the spring of 1926. According to Jenish, Tex Rickard said to a reporter covering the event:

Hockey is a game with great and wonderful possibilities. Within five years it will be drawing more spectators than boxing. But some of your owners are nervous and small. They talk like children. They are against every suggestion to widen the game, particularly as concerns the United States.

In the end, expansion won out. The fall of 1926 saw the NHL split into two divisions for the first time. The American Division was composed of the Bruins, Rangers, Pirates, Chicago Black Hawks and Detroit Cougars, while the Canadian Division contained the Toronto Maple Leafs, Montreal Maroons, Senators, Canadiens and, to maintain balance between the divisions, the Americans. From 1926 on, American clubs would outnumber Canadian clubs. Canada’s “National” Hockey League was dead, replaced with a binational cartel by the same (now meaningless) name.

Ninety years later, as debate rages over yet another NHL expansion, a new generation files into the same old trenches on the same cultural battlefield. Many Canadians recoil at the thought of an NHL team in Las Vegas, just as they consider existing teams in Florida, Arizona and North Carolina an abomination, a blight on hockey’s landscape. At the root of their argument is fear, a fear of losing control of Canada’s great game. Conversely, many Americans (and perhaps most importantly, thousands of Las Vegans) see in the league’s expansion opportunity, not only in terms of jobs created and money made, but an opportunity to grow the game they’ve come to love. Over the years, the league will continue to expand. Each time, the old battle will be re-fought. It’s a ninety-year-old war, and it all started with a single game.

AUTHOR’S NOTE: In addition to D’Arcy Jenish’s excellent book on the NHL’s first 100 years, this writer recommends Joining the Clubs: The Business of the National Hockey League to 1945 by J.Andrew Ross.