NASHVILLE — Andreas Athanasiou scored at 4:08 of the third period, and the struggling Detroit Red Wings beat the Nashville Predators 3-2 Tuesday night to snap a three-game skid.

Luke Glendening had a goal and an assist, Nick Jensen had two assists and Dylan Larkin also had a goal for Detroit.

Goalie Jimmy Howard made 32 saves for the win.

Viktor Arvidsson and P.K. Subban scored for Nashville, which now has lost three straight for its longest skid since losing four straight between Dec. 17-22. Ryan Johansen and Filip Forsberg had two assists apiece. 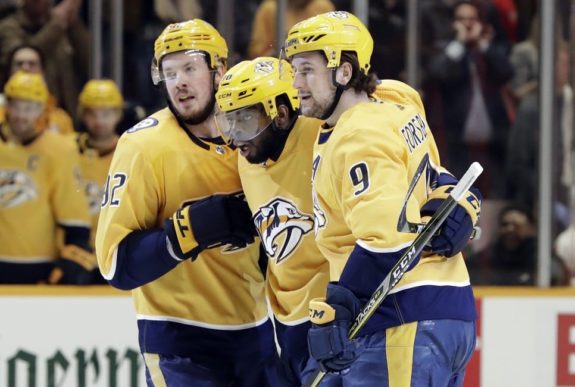 Nashville finished the game with a man advantage after Danny Dekeyser went to the box with 55.9 seconds left, took a timeout and couldn’t beat Howard to force overtime.

The Red Wings came in ahead of only Ottawa in the NHL. But Detroit has not lost in Nashville since Dec. 30, 2013. Detroit has taken nine of the last 10 in this series between the former Central Division rivals and took the season series.

Nashville, which lost back-to-back games to St. Louis over the weekend, opened the game outshooting the Red Wings 6-1. Only Howard making some great saves, including on Yannick Weber early, kept it scoreless. Glendening redirected the puck shot from the point by Nick Jensen, and the puck went off Rinne’s right shoulder into the net for a 1-0 lead at 15:05 of the first.

Larkin made it 2-0 for Detroit with a wrister on the power play at 7:13 of the second. Arvidsson, who came in leading the NHL with 16 goals since Dec. 31, got Nashville on the board with a slap shot off the post just 36 seconds later with his 25th of the season.

The Predators have struggled mightily with the man advantage this season, and they had converted only 2 of 46 over the past 14 games when Subban added another at 17:32 of the second. He scored his fifth of the season off a slap shot tying it up at 2.

Nashville has won only once when tied after two periods this season, and not even starting the third on a power play helped. Detroit took a 3-2 lead at 4:08 when Athanasiou threw a backhander at the net from the right, and the puck went off Rinne’s arm just above his glove.

NOTES: Detroit forward Justin Abdelkader passed Bruce MacGregor for 20th in franchise history with 675 games. … Nashville dropped to 1-5-1 when tied after the second period. .. Arvidsson now has 11 goals in his last 11 games and 20 points (17 goals, 3 assists) in the 22 games since returning from a broken thumb Dec. 27. … Johansen extended his point streak to a season-best five games with two goals and six assists. … Subban’s goal was his first on the power play this season. …