Skip to content
2014 is a long way off.  Most people don’t even know where they will be in two years, let alone what the 2014 version of Team Canada will look like.  But I guarantee you would be hard pressed to find a true Canadian hockey fan who hasn’t at the very least thought about who will be on it and what it would look like, even for a brief moment, come 2014.
We are two years removed from Steve Yzerman announcing the roster who would wear the red maple leaf for Canada in the Vancouver 2010 Olympics, and little over a week ago a panel of NHL analysts for TSN’s “That’s Hockey 2Nite” put together their version of what the 2014 roster may look like in two years.  Now, while so many things can change between now and then, and it would be a shock not to see some shifting from that list in two years, it is interesting to look at who the candidates are and who may be on the horizon for Hockey Canada.  Inevitably fans, myself included, started talking and debating the picks after watching the broadcast.  I saw numerous conversations over the following days on different media outlets about, “this guy over that guy” and “what were they thinking with that pick” or “I would do this” and so on. After reading the subsequent TSN article again and seeing many of the comments, I had some lively debates with a few friends and self-proclaimed hockey experts over who would make it and who would be left off.
While I will disclaimer this and say we know it is unrealistic to predict the team two years in advance, it’s entertaining, if nothing else, to see where Canadian hockey sits two years removed from Vancouver and two years to go for Sochi.
We decided to to take a shot at predicting Canada’s team in 2014.  Here’s what we came up with for our 23 man roster (13 forwards, 7 defencemen, 3 goalies).
Forwards

If, and it’s a big if, Sidney Crosby is available to go pencil him in as the #1 centre and captain. The golden goal scorer Crosby will likely be the face of the team and Hockey Canada in Sochi.  Close behind him in the #2 centre spot and possibly the team’s most important player is Jonathan Toews.  The 2010 tournament top forward and one of the most complete players in the world, Toews will be on the ice in all crucial situations and will also be the top faceoff man on the squad.  He is also our choice for captain in Crosby’s absence. 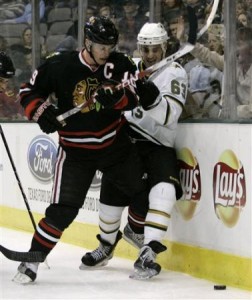 Toews was the tournament’s top forward in 2010

Rick Nash, Eric Staal, Ryan Getzlaf and Corey Perry all return to the team from 2010, and while all are having down seasons currently by their standards, expect a return to form in a year or two.  All four were big contributors in 2010 and will be relied on for the same as well as leadership as returnees in 2014.

Gone is stalwart Jarome Iginla and will be replaced on the top line by Tampa Bay sniper Steven Stamkos.  The NHL’s goal scoring leader, Stamkos will be looked to as a top option for goals for Canada in Sochi.

Another new member to the team and a player making a name for himself as one of the most complete talents in the NHL is Philadelphia’s Claude Giroux.  Both he and Stamkos bring top level talent as well as versatility, being able to play the wing or centre.

One of Canada’s strengths in Vancouver was its blend of experienced veterans and young players hungry to prove themselves on the international stage.  We went the same route and injected some youth and skill into the 2014 roster.  Making the trip will be the Islanders John Tavares, Bruins Tyler Seguin and the Oilers trio of Taylor Hall, Jordan Eberle and Ryan Nugent-Hopkins.  With chemistry being key in a short tournament we opted to bring all three young Oilers.  They have shown remarkable chemistry in their first year playing together.  Give them two more years with each other and watch out.  Tavares and Seguin are both having breakout years and were named to this year’s all-star game.  Tavares has become one of the top snipers in the league and Seguin leads the league with a +33 rating and just turned 20 years old a week ago. We have Seguin listed as our 13th forward on paper, but if he continues to progress at his current rate, he will be much higher on the depth chart in 2014.

The group as a whole is mobile and can move the puck, and each one can play a shutdown role if needed. Gone are long time pillars on the blueline Scott Niedermayer and Chris Pronger, leaving the door open for others to assume the role of leaders on the back end.  The three returnees from 2010 we have on the roster could certainly do that.  Shea Weber, Duncan Keith and Drew Doughty are all back and all three played large roles and big minutes for Canada in 2010.  Weber and Keith lead the defence two years ago in both ice time and scoring and Doughty tied Keith with a +6 to lead Canadian blueliners. 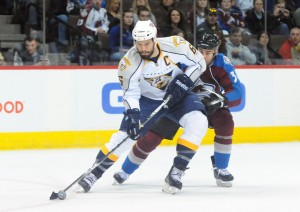 Weber will be a top paring defenceman for Canada in 2014

Another new name that could jump into the top four and play a major role is the Penguin’s Kris Letang.  Quietly establishing himself as one of the NHL’s best and a Norris candidate (if not for injury) the last two years, Letang is a swift skating offensive defenceman that plays with an edge. Having him on the roster meant we also said goodbye 2010 member Dan Boyle, although it was not an easy decision.

The three other names added are all Olympic first-timers and provide youth, size, skating ability and a good two-way game.  New York Ranger Marc Staal, Alex Pietrangelo of the Blues and Buffalo’s Tyler Myers were all choices to go to Sochi in 2014 and they provide the team with many options.

While it is a young group, all seven will be 30 or younger in 2014, it does not lack in experience as each one has international experience, two have won Stanley Cups and four of the seven wear letters for their NHL team.

Pittsburgh’s Marc-Andre Fleury and Habs goalie Carey Price were consensus choices to make the team, although there was some debate as to where they would fit on the depth chart.  The acrobatic Fleury was the #3 in 2010 and has since added a Stanley Cup to his resume.  Price may be the most talented Canadian netminder, playing on a bad Montreal team, and was an all-star this year.  We have added them as the top two and they will battle it out for the starter’s job.

The biggest debate came when deciding on who the #3 goalie would be.  Opinions were split on whether 2010 starter Roberto Luongo would be added as a returnee, albeit in a different role, or Canes stopper Cam Ward would go as the third stringer.  Luongo was the gold medal winning netminder in Vancouver, but his struggles have been well documented over the past couple seasons and you’re unsure of where he will be at in 2014.  Ward has proven he can win the big game with a Stanley Cup and Conn Smyth to his name, and we felt he would fare better in a depth role than would Luongo, which in the end was why we went with Ward over the Canucks goaltender by the slimmest of margins.

The fact is, Canada has an embarrassment of riches at multiple positions and to list the rest of the names that were mentioned in our discussion would last all day.  With young players progressing so quickly and injuries so rampant throughout the league, the landscape could, and probably will change drastically in 2 years.  It is interesting to see, however,  just how much even the predicted rosters have changed only two years from the Vancouver gold medal team, and I’m sure will change again in two more years.

If nothing else it is an interesting fantasy discussion.  Let the debate begin.