Klefbom broke a 2-2 tie with 2:20 remaining in the third on the power play with a blast from the point.

Jesse Puljujarvi and Alex Chiasson also scored for the Oilers (12-11-2), who won their second game in a row and are now 3-1-1 under new head coach Ken Hitchcock.

Dustin Brown and Jeff Carter replied for the Kings (9-15-1), who had a two-game win streak snapped.

L.A. goalie Jonathan Quick made his first start since Oct. 23, missing 15 games with surgery to repair a torn meniscus in his knee. 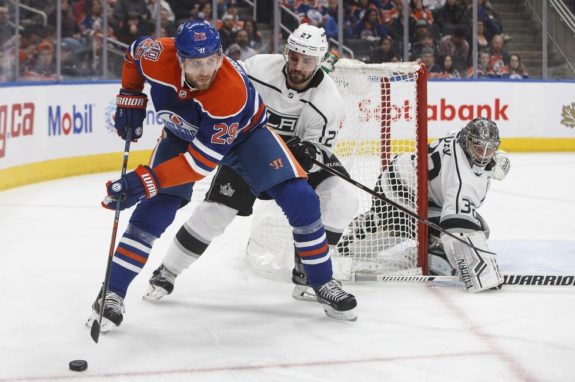 Edmonton started the scoring just 1:21 into the first period as Puljujarvi poked in the rebound of a Drake Caggiula shot past Quick. The play survived a coach’s challenge video review for suspected goaltender interference.

The Oilers added to their lead midway through the opening period on the power play when Chiasson, who came to the Oilers on a training camp try-out, scored his 11th of the season on a rebound from his knees.

Los Angeles got one back with six minutes left in the first when Brown beat Oilers goalie Mikko Koskinen on a one-timer from the top of the circle for his eighth goal of the season.

The Kings tied it up on a two-man advantage with 31 seconds left in the first on a goal by Carter, their first power-play goal on the road this season.

It looked like L.A. had the lead early in the third on a goal by Tyler Toffoli, but the play was deemed offside on a coach’s challenge.

The Kings conclude a three-game Western Canadian road trip in Calgary on Friday. The Oilers close out a three-game homestand on Saturday against the Vegas Golden Knights.

Notes: It was the second of four meetings between the Oilers and Kings this season. The Kings won the first contest 5-2 four days previous… To make room for Quick’s return, Los Angeles assigned goalie Peter Budaj to Ontario of the American Hockey League.