The Detroit Red Wings came in third in the Atlantic Division this past season, just one point ahead of the fourth place Ottawa Senators and two points ahead of the eight place Pittsburgh Penguins in the Eastern Conference. With teams improving around them, the Red Wings face the daunting task of once again making the playoffs for a current professional sports’ league record 25th season.

In order to do so, they will have to be at the top of their game against the top competition not only in their division, but throughout the league. With a new coach and some new faces in the Motor City, here are a few early season games that will be must-watches for Red Wing fans.

This game is a month into the season, but the Capitals coming to town will be particularly emotional for one member of the Red Wings. The 29-year-old had spent all ten seasons with Washington before leaving in free agency this summer for Detroit. He amassed 113 goals and 360 points in 575 games, while posting a +58 rating and 20 game-winning goals. A very valuable asset to the Caps, it will be interesting to see how Green responds to playing against a handful of players he spent many year’ with in America’s capital, as well as how the Capitals will respond to him on the ice. Many a time in the league we see players take opposition to a former teammate soon after they leave to go elsewhere, so it’s not out of the realm of possibility that this game might get a little chippy towards the end.

There is another dimension to this game, however, that might make it even more important. The Red Wings and Capitals both ended up in the playoffs this past season, both earning berths in their respective divisions. In an effort to take that next step from playoff team to Cup contenders, Detroit and Washington acquired players to suit their team weaknesses. The Wings acquired Green and veteran center Brad Richards, while the Caps added Justin Williams from the Los Angeles Kings and T.J. Oshie from the St. Louis Blues to help bolster their offensive depth. If the Red Wings want to improve on their third place finish in the Atlantic last season, they are going to need to prove they can match up with and beat teams like the Capitals, and vice versa. With teams like the Columbus Blue Jackets also improving their rosters, the fight among the top eight teams in the East could go down to the wire. The Red Wings’ showing that they can handle the Capitals’ dynamic offense, especially in Green’s first game against them, will be crucial to the Red Wings’ early season.

Obviously there is always an emphasis placed on playing your division opponents early in the season, especially with the newly formatted playoff system. When the top three teams in each division are guaranteed a spot in the playoffs, playing well in the division is never more crucial. The Wings have a tough task in their fifth game of the regular season, when they head up to Montreal to take on the Atlantic Division-winning Canadiens. Aside from trying to best last year’s division winners right out of the gate, this early season road game is big for Detroit considering the lack of success they had against the Canadiens last season.

Detroit had an 0-2-2 record against Montreal, and were outscored 7-1 in their two home games while taking Montreal to overtime across the border in their other two contests.

The Red Wings would love to pick up a victory over the Canadiens in a very hostile environment in Montreal to get them on the right track not only against the Canadiens, but to start of the season.

Staying in the Atlantic Division, the Red Wings battle the Lightning at home in just their third regular season game. This will be the first time these two teams have a chance to meet since their seven game first round Eastern Conference playoff match up, which the Red Wings lost.

Much like the Canadiens, the Wings would love to start the season off with a victory against a team they were behind in the Atlantic last season, but this game might have extra emphasis due to the events that took place in the playoff series.

Red Wing defenseman Niklas Kronwall’s hit above on Lightning forward Nikita Kucherov in Game 6 of the series earned Kronwall a one game suspension from the NHL Department of Player Safety. As a result, Kronwall was unable to play in the series deciding game and, baring any injuries, this is the first time Kronwall will be on the ice against the Lightning since the hit.

Kucherov said he is okay after Kronwall hit, didn't call it dirty: "It's a hit, I'm not going to cry now. It's part of the game."

Although Kucherov didn’t take objection to the hit, I’m sure that he would like to get a check back on the big Wings’ defenseman if he had the chance. Couple that with the memories of the hard-fought seven game series these two had and an early season Atlantic Division battle and you have all the makings of one fantastic hockey game. The Wings will look to avenge their Game 7 loss and show the Lightning they mean business, while Tampa Bay will do their best to assert themselves as a dominant force in the Eastern Conference once again.

Moving to another Atlantic Division foe, the home-and-home series against the Ottawa Senators at the end of the first month of the season will be extremely telling. I know I’m cheating a little here putting these two games as one, but one game isn’t any less important than the other, and together, they are even more important. As mentioned above, Detroit was only one point ahead of the Senators for that third place spot in the Atlantic Division, as Ottawa surged near the end of the year to get within striking distance. With Montreal and the Tampa Bay Lightning looking as if they are going to take the top two spots in the division once again and the uncertainly of the Boston Bruins’ roster, it looks as if it’ll be a fight between Detroit and Ottawa once again for that third and final Atlantic Division spot this season.

The Wings and Senators are similar in many ways. Both have up-and-coming young goaltenders in Petr Mrazek and Andrew Hammond, but also solid veterans in Jimmy Howard and Craig Anderson that aren’t going to let their starting roles go easy. They also are both have a good mix of young talent and veteran leadership that will help going down the stretch. Detroit youngsters Gustav Nyqusit, Justin Abdelkader and Tomas Tatar all benefit from having veterans like Henrik Zetterberg, Pavel Datsyuk and now Richards show them the ropes in the same way that Ottawa’s Hammond, Mark Stone and Mike Hoffman learn from Erik Karlsson, Milan Michalek and Bobby Ryan.

Both teams bring relatively the same core into this season as they did last season and with a injuries to Datysuk and Johan Franzen early for the Red Wings the Senators might be able to take advantage and gain some early ground. But teams always go the extra mile when it comes to division games, especially early home-and-homes as big as this one. Expect two hard-fought games from two teams that know, come April, there’s a good chance they’ll be fighting one another for a chance to make the playoffs.

While it might be obvious or cliché to mark the first game of the season for any team as the most important one to watch, I chose the Wings’ home-opener against the Leafs for a specific reason. The Red Wings promoted Jeff Blashill  from head coach of their AHL affiliate in Grand Rapids to the NHL level after parting ways with their coach of ten seasons, Mike Babcock.

Babcock coached the Red Wings to playoffs in each of his ten seasons and won a Stanley Cup with the club in 2007-08, but left the team for . . . the Toronto Maple Leafs. So the Wings first game at home will be against their former coach. 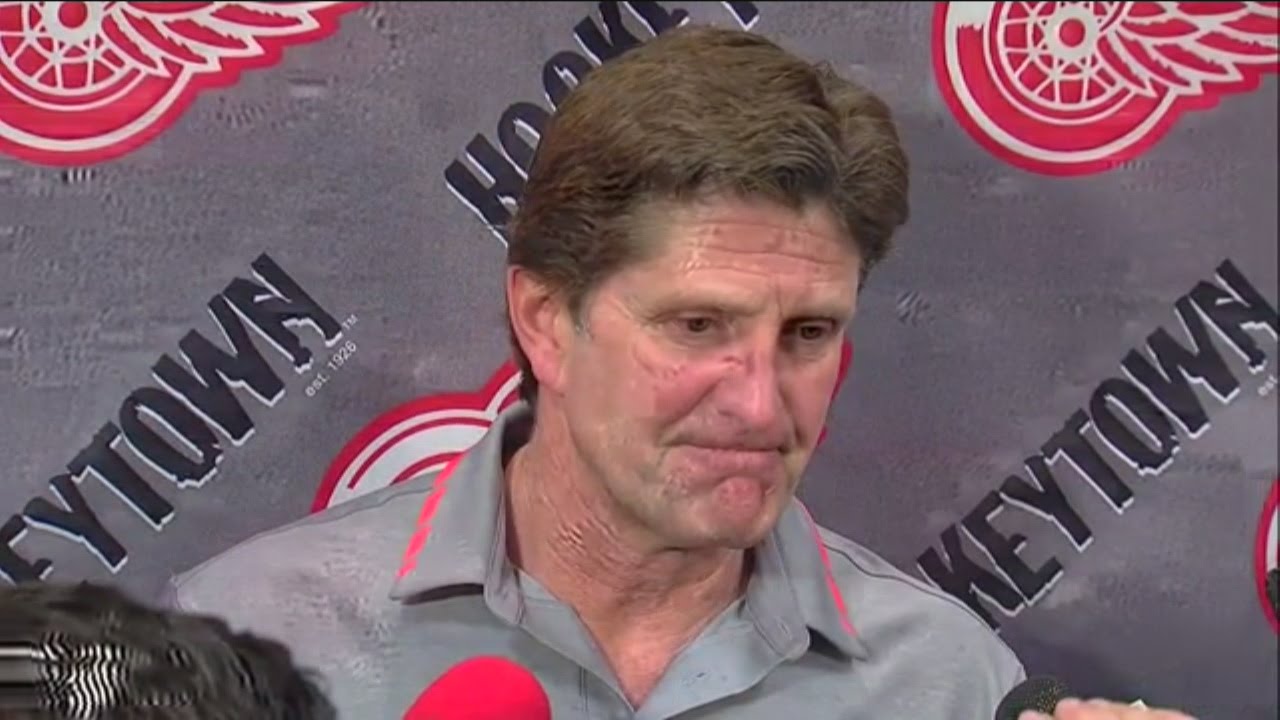 It was obviously an emotional decision for Babcock, and it will be even more emotional when he steps back into Detroit behind the opposing bench for the very first time. A new era in Detroit will be ushered in, but Babcock will be there. It should be an emotional night and a must-see for Detroit fans.