Will is a powerful word.

Replace it with can, and the entire tenor of the conversation shifts. Can Lindsay Lohan stay out jail? It’s theoretically possible. Can the Pillsbury Doughboy flip off the camera as he’s being shoved into the oven? FCC censorship standards won’t allow it, or he might. Can the Los Angeles Kings beat the St. Louis Blues in their Western Conference Semifinal series? Few would argue against the possibility.

As a Kings fan, decades of futility have culminated in a profound lack of sensibility. The pragmatic approach would be to sprinkle can throughout this piece, obtaining consensus between fans of both camps in the hypothetical. Read, agree or disagree, and move on. However, the litany of frustration from being a longtime fan of one of the NHL’s least-successful franchises has managed to skew my rationality meter. An irrational bravado has taken hold, the catalyst being the team’s first payoff series win since the 2001-02 season. It’s impossible to quell, and thus, I will not try:

The Los Angeles Kings will defeat the St. Louis Blues and advance to the Western Conference Finals this year.

The following are the five factors in their favor, which parallel the five reasons why I’ve quite possibly flipped my gourd.

#5: The Kings have the superior offense

The spit-takes are probably reverberating from St. Louis to Spokane. How many times have we heard that Los Angeles had the second-worst offense in the NHL this season? Plenty. Taken as a whole, it’s a true statement. Meanwhile, although St. Louis won’t burn out many lamps themselves with their 21st-ranked attack, it was still nearly a quarter-goal more than the Kings’ tepid offense. Advantage, St. Louis?

Advantage, Los Angeles. Starting just over two months after the firing of former coach Terry Murray, and coinciding neatly with the deadline-day acquisition of Jeff Carter, the Kings’ offense caught fire. The tight, ridiculously over-structured offense employed by Murray was gradually unwound by Sutter, allowing for more creativity and improved flow. The net result was a 2.96 goals/game clip for the final 26 games of the season. Better still, the top line of Dustin Brown, Anze Kopitar and Justin Williams came alive, combining for 29 goals and 77 points in that span. Meanwhile, the Blues scored 2.58 goals/game over their last 26 games, and their top line produced just 47 points. Yes, it’s a small sample size, and one line does not a team make. St. Louis has a plethora of outstanding playmakers, along with superior team speed. However, an argument can be made that with the additions of Mike Richards and Jeff Carter, along with their top line fully unleashed, the Kings now possess the more dangerous attack. 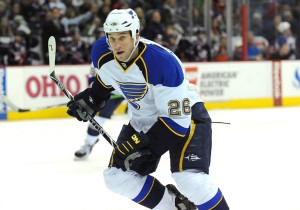 #4: The Kings have the one of the best fourth lines in the league

It’s a debatable assertion, but the fourth line of Kyle Clifford/Brad Richardson, Colin Fraser and Jordan Nolan has been terrific, and a difference-maker, particularly during the postseason. The Blues’ fourth line consists of B.J. Crombeen, Scott Nichol and Matt D’Agostini. More rugged, but less able to contribute offensively, and more likely to take penalties. In the playoffs, with tight checking and collapsing defenses, offense and puck possession from the “grind” line magnifies in importance.

#3: Special teams are (slightly) in the Kings’ favor

Los Angeles was the fourth-best penalty-killing team this year at 87%, slightly above St. Louis’ 85.8% clip. Likewise, their power play succeeded at a 17.0% rate, versus 16.7% for the Blues. St. Louis, to this point, has been more efficient in both areas during the postseason, but the body of work suggests a slight nod toward the Kings in both areas.

#2: The Kings are the more physical team

Los Angeles threw 2,274 hits this season, second in the NHL, and were led by perennial NHL top-three hits leader Dustin Brown’s 293. St. Louis recorded 1,949 hits, 12th in the league, with David Backes’ 226 leading the way. The Blues play physically, and are more likely to draw penalties, but the hits advantage is a substantial difference-maker. Just ask Henrik Sedin.

Brian Elliott had an amazing year, with a microscopic 1.56 G.A.A. and unbelievable .940 save percentage in 38 games. Jaroslav Halak was also highly impressive at 1.97/.926 in 46 games. Together, they combined for 15 shutouts and won the William M. Jennings Trophy, allowing a near-record low 165 goals. Halak is still day-to-day, however, having sustained an ankle injury in game two of the team’s first-round series versus San Jose. As insanely good as he was this year, Elliott has been even better in relief of Halak so far this postseason.

And yet, over the past two years Jonathan Quick has rapidly ascended to Vezina-finalist status, logging 130 games played and recording miniscule 2.24 and 1.95 G.A.A.’s. Elliott and Halak have been terrific, but Quick has been the man for Los Angeles since their rise to relevancy began in 2009-10. He’s also faced superior offensive teams in the playoffs for three straight seasons, and is arguably the most battle-tested of the three goaltenders, at least in recent seasons.

Obviously, this is going to be a very low-scoring series. The defenses, the penalty-killing units and the goaltenders are all too good to argue the contrary. And although I’ve listed the five reasons I believe the Kings will win the series, clearly there are factors that favor St. Louis as well, not the least of which is home ice advantage in front of a raucous crowd at the Scottrade Center. In the end, it will likely be an extremely even matchup of two similar clubs charged with an identical mission: make the conference finals for the first time since before Lindsay Lohan was a regular on the police blotter.

Or in the Kings’ case, a regular on the jungle gym in elementary school.