The Phoenix Coyotes are currently ninth place in the Western conference. They are in a tie with the eighth place Los Angeles Kings on points, but sit behind them by virtue of having played more games. Dave Tippett’s team has done nothing but shock the NHL ever since he became head coach. Despite the fact that the Phoenix Coyotes had made the playoffs in consecutive seasons battling through ownership issues and finding ways to score without top tier scorers, most analysts expected this franchise to falter with the loss of Ilya Bryzgalov this offseason. To an extent they have faltered; the Phoenix Coyotes had more secure playoff positions in each of the last two seasons at this time of year, but this team has usurped expectations once again by being able to battle for a playoff spot at all.

The Phoenix Coyotes are used to being doubted and they are certainly being doubted again this season. Expectations seem to be that the Coyotes will not be able to compete with more talented teams like LA, San Jose and Dallas. This is a team that has proven that it is dangerous to count them out in the past and this article will give five good reasons why they shouldn’t be counted out once again and why they will make it into the postseason for the third consecutive season.

1. Winning Is A Habit

Dallas were last in the playoffs in 2008, Calgary haven’t made it to the postseason since 2009, Colorado have missed the playoffs in three of the last five seasons. None of these franchises have exhibited the sort of ruthless efficiency that has come to typify Tippett’s Phoenix Coyotes. Make no mistake about it, winning is a habit. The core of this roster has been together through all of the trials and tribulations and they will not be phased by this challenge. Shane Doan’s suspension is obviously a big blow. Doan is an important leader on this team and he has scored some big goals for the franchise. However, if the past is anything to go by, then Doan’s suspension could be just the thing to galvanise this group over the last eight games.

Oliver Ekman-Larsson has been getting better and better all season long to the point where he is now Tippett’s go-to-guy on this blue-line. The former sixth overall pick in the 2009 draft has progressed steadily from his rookie season last year. The blue-line was a cause for concern for much of the season and one of the reasons that the Phoenix Coyotes found themselves on the edge of the playoff race entering February. Keith Yandle has endured a down year after breaking out in 2010-11 and veterans Derek Morris and Adrian Aucoin have experienced their fair share of ups and downs. Ekman-Larsson is a big, physical, smooth skating defenseman with a hard shot and good offensive vision. As the season has progressed, Ekman-Larsson has evolved from being a third pairing defenseman to playing over 30 minutes of ice time in some games. Tippett is a coach who makes his players earn that ice time.

The Phoenix Coyotes owe a lot to Dave Tippett as coach. Since being hired in September 2009, he has given this franchise legitimacy and made them into a consistent winner. His record in the postseason itself may not be too great, but it is worth noting that he has missed the NHL playoffs just once as a coach. This is a coach, who is used to the Pacific division and the Western conference and he is used to making the playoffs. 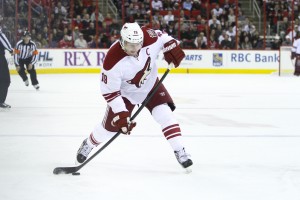 GM Don Maloney was insistent that his team had improved its offensive depth this summer. It was hard not take those comments with a pinch of salt. The Phoenix Coyotes are hardly a dominant looking offense and their goals per game have actually dropped in 2011-12. However, offensive depth is still a significant factor for this team. The trade deadline acquisition of Antoine Vermette has helped significantly and suddenly this is genuinely a forward group that can score from all four lines. Boyd Gordon, who was the second line center at one time, is currently the fourth line center. Martin Hanzal, Vermette and Daymond Langkow center the top three lines, while Raffi Torres, Ray Whitney, Lauri Korpikoski, Shane Doan, Radim Vrbata and Mikkel Boedker give the top nine solid depth on the wings. This is a team that can play the same tough two-way style throughout its entire line-up.

With such a close race, scheduling inevitably plays a factor, and Phoenix can feel pretty happy about theirs. Three of their next four games are against teams that are in the race with them (Colorado once and San Jose twice), while they play five of eight on home ice. Three of the games are against non-playoff teams as they take on Columbus, Anaheim and Minnesota. The final two games are against top of the league St Louis, but it might actually pay to play against a team with less to play for at this time of year.

Just three points separates 11th place from the Pacific division leading Dallas. This year’s Western conference playoff race is as tight as ever and the Phoenix Coyotes are right in the thick of it. For better or for worse, fans of the team should sit back and enjoy the ride.