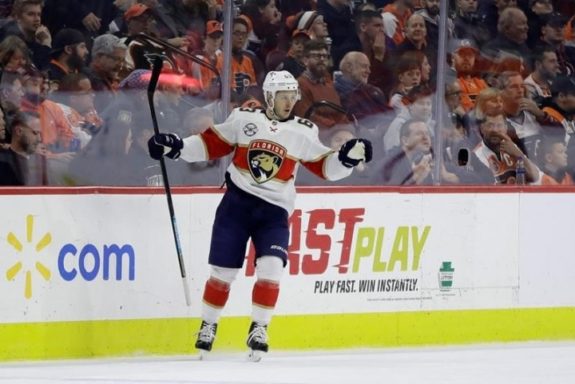 Jakub Voracek had the lone goal for the Flyers, who had won three straight and five of six.

Both teams have rebounded nicely after struggling early in the season. The Panthers are 7-5-3, while the Flyers are 9-8-1.

Just eight seconds after Voracek tied the game, Luongo stoned him on a breakaway after Nolan Patrick won the face-off. Oskar Lindblom hit a post on a shot a few minutes later for Philadelphia.

Down 2-0 after two periods, the Flyers came out with energy to start the third. Voracek snapped a shot from the right side past Luongo for his fifth goal to cut the deficit in half.

Ekblad scored his first goal this season to give the Panthers a 1-0 lead almost midway through the second period. Shortly after Ivan Provorov’s tripping penalty gave Florida a power play, Frank Vatrano deflected Mike Hoffman’s slap shot and the puck trickled to the left side of the net. Ekblad flipped a backhander that hit goaltender Brian Elliott’s stick and glove before going into the net.

Dadonov made it 2-0 late in the second period on his eighth goal. He skated from his blue line up the ice and fired a wrister from just outside the right circle into the top shelf.

NOTES: The Flyers beat the Panthers 6-5 in a shootout on Oct. 16. The teams meet one more time. … Panthers began a season-high six-game road trip. … Flyers played the middle game of a five-game homestand. … Dadonov has four goals in the last six games. He has six goals in seven career games against Philadelphia. … Ekblad hadn’t scored a goal since March 29 last season, when he recorded his career-best 16th goal. … Hoffman has a point in 13 straight games and Dadonov’s points streak has reached 12 games.