Besides the mammoth blueliner, Samuel Morin, the Rimouski Oceanic have, they also are in possession of a hulking center in Frederik Gauthier.  He stands 6’5″, but is a very proficient skater with quick acceleration and agility.  He uses his size along the boards to control the puck and work hard along the boards. 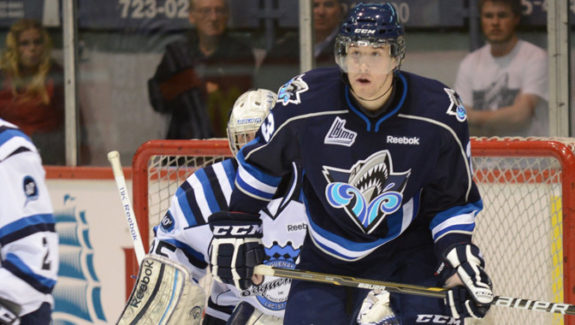 Besides the mammoth blueliner, Samuel Morin, the Rimouski Oceanic also are in possession of a hulking center in Frederik Gauthier.  He stands 6’5″, but is a very proficient skater with quick acceleration and agility.  He uses his size along the boards to control the puck and work hard along the boards.

With that size, his shot definitely packs a punch.  Gauthier has a quick release and his wrist shots are strong and accurate.  He likes taking chances and being creative with the puck, but his game is better suited in the dirty areas where he can play to his advantages.

There was a bit of a question mark with Gauthier coming into the QMJHL as a rookie, but he’s been able to quiet his critics with stellar play and an almost point-per-game total in his first year.

Gauthier has a knack for being in the right spot to break up a play and never quits on his shifts.  His two-way ability is what has consistently kept his name high in the rankings, and it’s likely that’s where he will be picked come June 30, 2013.

The consensus is he will be selected somewhere between 15th-23rd overall.  He’s been in that position almost the entire season.

“Gauthier experienced an up-and-down campaign. He showed significant flashes, but also lapsed offensively for long stretches. He measures at 6’5″, 214 pounds, has some offensive talent, and shows advanced play for his age. He is an above-average skater, well above-average for a player his size, as he has a real easiness to his stride. He exerts little effort in his pushoffs, and he picks up speed very well. He is very agile, given his size. He had good offensive numbers this season, despite lining up against the opposition’s best players and taking a lot of defensive zone draws. He has a good amount of offensive hockey sense, but sometimes he is too conservative and would be better served by letting his creativity show. His pure offensive upside is a question mark. He also can be a gentle giant at times. He will engage, and I would not describe his play as soft, but he will not throw his body around, and he is not the meanest of players. Despite his frame, he does need to get stronger, and he could stand to shoot a tad more as well.”

“Humongous and well skilled two-way centre in the Jordan Staal mould. Good puckhandler who distributes it well. Moves well for a big man-child and does good work in traffic.  Doesn’t have a naturally nasty disposition, but don’t get him angry or he’ll turn mean in a hurry. Will use his size to win battles.  Very defensively aware and responsible; cuts off passing lanes and understands positioning. Strong hockey sense in all three zones. Quick release on his shot.“

Is Frederik Gauthier the next Keith Primeau? (Flyers Faithful)

Gauthier has played in 12 games for Team Canada, in which he has 2 goals and 5 assists.

Top 6 two-way forward capable of playing in any situation

Fill out his body

– As was mentioned, the two players you can compare Gauthier to most are Jordan Staal and Sean Couturier.  Another player I think he resembles a lot is Mikko Koivu.