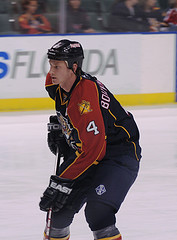 Not wanting to steal any thunder from the upcoming Stanley Cup Finals, I’m going to take advantage of the couple days hiatus to look ahead to the July 1st holiday that is the opening of the free agent market.  The Florida Panthers will be the focus of many hockey eyes all over, as their list of UFA’s is as enviable as any.  As far as the Panthers are concerned, 4 of their top 6 defensemen are free agents, and the team is in desperate need of a top notch scorer.  Here’s a look at what the Panthers and GM Jacques Martin have to deal with this summer.

Quite possibly the most coveted free agent this summer, Bouwmeester was dangled as trade bait at the deadline, but in the end stayed in south Florida to help the Panthers on their playoff push.  As we all know, the push came up short, and Florida is faced with losing the All-Star defenseman this summer.  While Jay has yet to come out publicly and say he is looking elsewhere, it is hard to imagine the Panthers offering enough to keep him.  Rumors have already surfaced involving Bouwmeester.  The Panthers do have the option of trading negotiation rights to another team, in which case they would get something in return.  The most interesting rumor involves the Calgary Flames.  Underground rumblings say that J. Bo was no big fan of Mike Keenan (Keenan coached in Florida during Bouwmeester’s first 2 years in the league, and was the Panthers’ GM until 2006).  The firing of Keenan in Calgary could be seen as a road paving to get Bouwmeester.  Also, the Hockey News has suggested that the Flames may be willing to trade Dion Phaneuf and his hefty, hefty, hefty contract to Florida in exchange for rights to Bouwmeester.  The Miami Herald’s George Richards does not think this happens unless Bouwmeester agrees to a long term deal with Calgary ahead of time.  In any case, Bouwmeester news and rumors are sure to continue throughout the summer.

Craig Anderson is an interesting case.  Playing backup to Tomas Vokoun since 2006, Anderson has shown starting goalie talent at times.  During the most crucial stretch of the season, Pete DeBoer went to Anderson for 4 straight games.  He came away with 3 wins, and there is no doubt he wants to be a starting netminder next season.  The question is; Can Florida afford to keep Anderson, who will get a substantial raise, and Tomas Vokoun, who already holds a $5.5 million, multi-year contract?  Vokoun also has  a no-trade clause, leading talking heads to speculate that Anderson could be on the move this summer.  A couple of factors against Andy; Last year, Anderson appeared in 31 games.  That’s the most action he’s seen in an NHL season.  He’s only played in 50+ games twice, and played over 2,000 minutes 3 times.  Also, there are a handful of other backups that starred last season, including Scott Clemmensen.  Expect Anderson to sign a $1.5 – $2 million contract somewhere.  Teams rumored to have interest include the Flyers, Avalanche, and Islanders.

The 2008\2009 version of the Panthers was deep in youth.  Radek Dvorak was one of the few veterans.  Dvorak started his career with the Cats in 1995, and made the trip to the Cup Finals in 1996.  After stints with the Rangers, Oilers, and Blues, Dvorak came back to Florida in 2007.  He was part of the Panthers’ most consistent line last year, playing with Ville Peltonen and breakout youngster Greg Campbell.  It’s likely Dvorak is no more than a 3rd line grinder in the future, though, chipping in 10-15 goals over the next couple years.  Unfortunately, Florida has more than enough of that type of player, many of them younger.   It will be up to the GM whether or not Dvorak is worth another contract.

Another aging grinder, Peltonen was unable to produce the kind of numbers the Panthers were looking for.  He was a part of that line with Dvorak, but is 4 years Dvorak’s senior.  He brings the type of effort and character that every coach wants, but it’s clear that he is not going to be a consistent contributor of offense.  He does have experience in the leadership role, captaining the Finnish National team the past few international tournaments, but beyond that, there’s not much he can offer to Florida’s future.

If Jay Bouwmeester is Batman, Skrastins is his Robin.  The two patrolled the blue line together for most of the year, and as offensively talented as Bouwmeester was, Skrastins was just as solid on the defensive end.  A league leader in blocked shots, Skrastins could be an important keep for Florida this offseason, should they lose Bouwmeester.  The downside is that he is 35 next season, and does not quite fit the offensive, aggressive style head coach Pete DeBoer likes his defensemen to play.  With that being said though, Skrastins is invaluable as a defensive defenseman, something Florida might be in need of next year.

Nick Boynton came to Florida as part of the package that sent Olli Jokinen to Phoenix last offseason.  Boynton has shown flashes of brilliance, but after a late season tiff with the head coach, Boynton has said that he does not expect to be wearing a Panthers jersey next year.  He is a top 4 defensman and is certain to garner interest from other teams.  While not the smoothest skater or sharpest stickhandler, he is another guy that you want in your own end.  Boynton is not afraid to get physical, and will be a nice addition to a team looking to get deeper on the blue line.

The 36 year old Cullimore was often times the 6th or 7th defenseman for the Panthers.  The 15 year NHL veteran was solid enough when called on, but is clearly a last option.  He was signed in October last season, after Bryan Allen went out for the season after just the 2nd game in.  I can’t imagine a scenario that sees Cullimore as a Panther player next year, at least not by choice.  Where Cullimore ends up will depend on other moves made by the team.

(Richard Zednik was a UFA, but has already signed on with a Russian team.)

Karl Selvig was born and raised in south Florida, and was introduced to hockey when the NHL came to Miami in 1993. It was love at first sight. After playing through college, he turned to the media side of the sport and has enjoyed writing about his beloved Panthers since 2007.