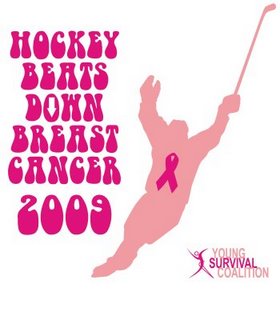 Battling breast cancer one puck at a time

With stout determination and a fair amount of grit, the inaugural Hockey Beats Down Breast Cancer benefit hockey game recently went from concept to implementation in just over thirty days. The same steady focus shown by the Columbus Blue Jackets during the 2008-09 season was taken to heart by Anna Cluxton and Alison Lukan; two Blue Jacket fans who helped to coordinate the game. Working with the CAHL in Columbus, the rosters for both teams were full; forty-six local players participated in this “All-Star” format game. And, of course, they wore pink!

With proceeds benefitting the Young Survival Coalition and the YSC Puck Bunnies, the event was by all expectations a resounding success, with approximately $6,000 raised. While no Blue Jackets players were in attendance, the Blue Jackets Foundation provided the use of the Blue Jackets practice facility and Zamboni 3 for resurfacing the ice between periods, jerseys for both teams and numerous items for the silent auction, including a rally flag signed by the 2008-09 Blue Jackets team.

The pink and white hockey jerseys worn by the players each had the name of someone stricken by breast cancer and were sponsored by friends, family and loved ones; which made the on-ice activities very colorful. With the pre-game “meet and greet” being held at local watering hole The Garage Bar, jersey sponsors were able to meet the players that would be wearing “their” jersey during the game. The festivities then moved to the Dispatch Ice Haus for the game. Blue Jackets vocalist Leo Welsh (LEO!) sang the national anthem before crowd favorite (and local celebrity in his own right) Matt “Jason” Garrett dropped the ceremonial first puck. During the game, the “Bunny Power Patrol” made their way through the stands while the silent auction was being held in the lobby.

While normally I would give the final score, there were only winners at this event and the score didn’t matter. Although, I will say that John Markell’s White Team pretty much beat up on  Jason Lammer’s Pink Team. After the final horn sounded, the players met at center ice for the traditional hand shake. The fans who sponsored jerseys then were given the pink and white jerseys literally off the players backs. The players, coaches and fans then adjourned to arguably one of the best hockey bars south of the Canadian border, the RBar, for Drink Pink!, a celebration of the day.

The response for this event was so positive that the organizers have decided to make this an annual event and are already looking forward to working with the Columbus Blue Jackets and the Blue Jackets Foundation to make it even bigger and better. The local chapter of the Young Survival Coalition was very pleased with how this event came together in such a short amount of time and they are looking forward to next years’ game.

Young Survival Coalition (YSC) is the premier international organization dedicated to the critical issues unique to young women and breast cancer. YSC works with survivors, caregivers and the medical, research, advocacy and legislative communities to increase the quality and quantity of life for women diagnosed with breast cancer ages 40 and under.

Rick Gethin was an Associate Editor of TheHockeyWriters.com.