By now, you may be sick of hearing about the NHL’s inconsistency with supplemental discipline, on-ice calls, concussions, and many of the other things that surround the physical play associated with the quickness and strength of players today.

But there’s another problem that is slowly starting to arise in the NHL now, and that is the instigator penalty indirectly allowing these things to happen on the ice.

The NHL is entering an era, where more than ever, the enforcer is quickly becoming obsolete. With the salary cap and more highly skilled players vying for a spot with clubs, there just isn’t any room to have someone who is just there to throw punches and instill fear into the opposing team. In fact, those sort of guys have become more of a detriment than an asset in the game. There isn’t a place for the Zac Rinaldo’s and John Scott’s of the world.

However, aside from being a detriment, it’s becoming ever more clear that these players are also becoming a danger on the ice. They are out there to hunt for the big hit on the guy skating with his head down and in a game with ample physical contact, that’s OK, as long as the hit is delivered in a clean manner.

What isn’t OK, is when one of these players deliberately tries to deliver a cheap and dirty hit with blatant intent to injure another player. That isn’t hockey, but that is becoming more prevalent than ever in a league that has rules in place that protect these players.

“Instigator – An instigator of an altercation shall be a player who by his actions or demeanor demonstrates any/some of the following criteria: distance traveled; gloves off first; first punch thrown; menacing attitude or posture; verbal instigation or threats; conduct in retaliation to a prior game (or season) incident; obvious retribution for a previous incident in the game or season”

But that’s what it’s doing.

Just a few short weeks ago in Columbus, the Penguins and Blue Jackets met for the second time this season. As usual, things were heated early between the two division rivals. But then, Brandon Dubinsky went and took things to the next level.

The Penguins captain gets cross-checked in the neck and not a single player comes to his aid to fight Dubinsky or let him know that won’t be tolerated.

Why? Well there could be a couple of reasons.

First and foremost, the Pens don’t have a lot of fighters on their team, they’re near dead last in the NHL in major penalties.

The more likely explanation, however, is that this was a tie game late in the second period over a stretch where the Penguins really needed to pick up points in the standings. If a player decided to take on Dubinsky, that would likely mean that he would have gotten five for fighting plus two for instigating and the mandatory 10-minute misconduct that rides along with that.

That means losing a player for essentially the rest of the game.

Not worth it if you’re the Pittsburgh Penguins, and to make matters even worse, the supplemental discipline handed down by the NHL was a mere slap on the wrist. Something that has become commonplace in the league.

As I mentioned, Dubinsky didn’t have to deal with any opposing player throwing punches his way, so he ultimately got away with throwing a very dangerous check at a star player. But that one game suspension surely would do the trick, right? 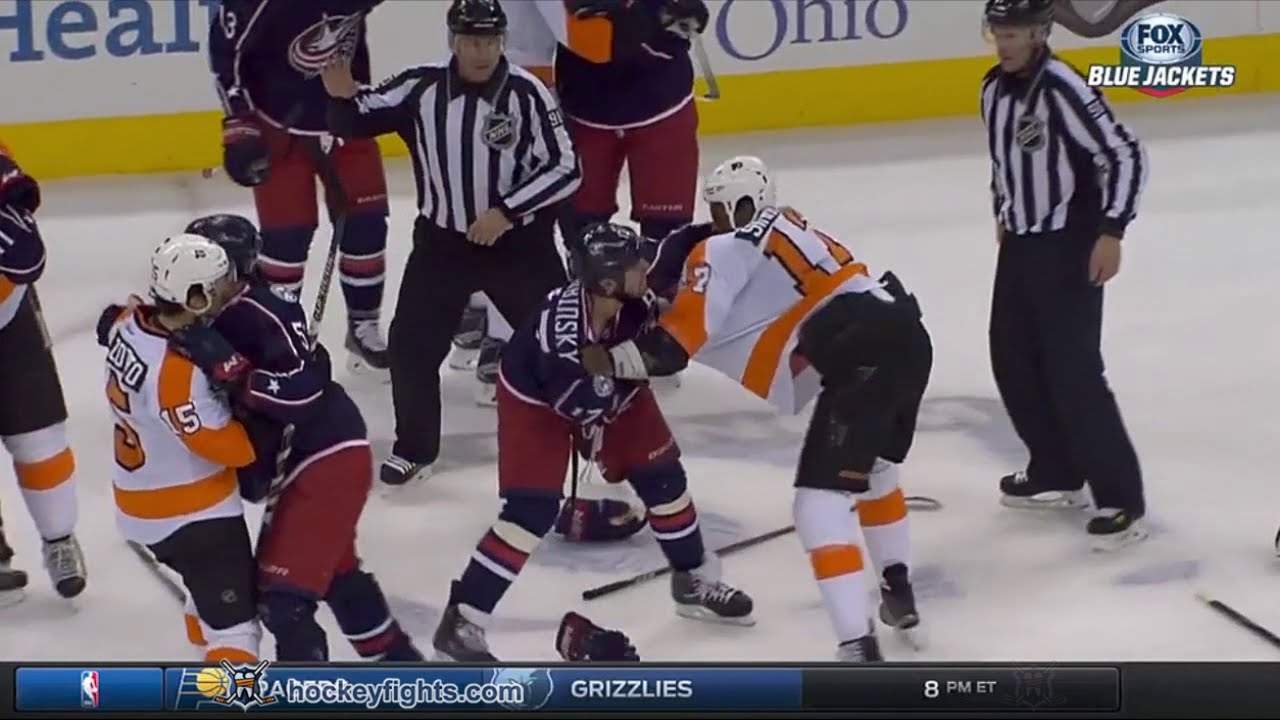 Another cheap hit from Dubinsky, this time on Flyers star player Jakub Voracek. A clear-cut, no bones about it, knee on knee hit.

This time, however, Dubinsky had to face the wrath of Wayne Simmonds afterwards. The way it should be if a player is going to run around and throw hits like that.

That play should have ended with Dubinsky getting two for kneeing and five for fighting and Simmonds getting five for fighting. Instead it ended up as a four on four and put the Flyers at a disadvantage.

Dubinsky didn’t curl up in a ball and shy away from the fight, he willingly engaged and dropped the gloves at nearly the same time as Simmonds.

The instigator penalty protected the aggressor in this

Don’t get me wrong, there are plenty of situations where the instigator rule should be strictly enforced.

You may remember a brutal fight between goaltenders Braden Holtby and Ray Emery just a few seasons ago. That was a whole different ball game. Emery engaged Holtby who clearly had no intention of fighting whatsoever. That is where the instigator rule should take effect, and that is what it is meant to keep out of the game.

Why The Instigator Needs a Change

Those of you who have been around the game long enough may remember an enforcer by the name of Marty McSorley. He came into the league in 1983 and quickly earned the role of being Wayne Gretzky’s bodyguard.

If you wanted to go after the Great One, you were going to have to deal with what McSorley had to offer, and a quick search on YouTube will have you thinking twice about doing that.

That’s exactly what needs to start happening again. Players didn’t have to worry about sitting in the box for a whole period just for sticking up for their teammate. Players did however have to worry about sticking up for themselves after going after someone with a cheap shot. If you think for a second Dubinsky would have gotten away with that 20 years ago, you are mistaken. And there’s a high probability that he wouldn’t go out a few games later and do it again.

This whole idea of being more lax about the instigator rules isn’t meant to bring the NHL back to the 80’s, but the general idea of the players policing themselves is probably the most effective way to mask the head shots and the cheap shots.

If the John Scott’s, Raffi Torres’, and Zac Rinaldo’s of the world have to worry about standing up for themselves after throwing those types of hits, then they’re much less likely to go out there with the intent to injure another player. The league forcing them to sit in the press box for one game isn’t going to stop them from going out there with the intent to injure.

As I mentioned above, there are situations in which the instigator penalty is completely warranted and needs to be in effect.

But in most situations, it is handed down to a player defending his teammate after a dirty hit, and that is having the exact opposite effect on the severity and amount of these hits.

The NHL needs to relax the rules a bit or more players are going to fall victim to dirty hits.