On Saturday night, Connor McDavid torched the Sarnia Sting to the tune of 2 goals and 2 assists in a 7-3 victory. At the same time, Eichel was suiting up for his first career game in Agganis Arena wearing a BU Terrier jersey. The opponent was the St. Thomas Tommies, a Canadian university from New Brunswick.

In warmups, Eichel was calm and collected. He made crisp passes, didn’t look jittery, and looked like he was having fun. Despite all of the hype surrounding him, Eichel’s innate ability to remain calm under pressure was evident throughout warmups and the game.

Eichel skated on a line with senior assistant captain Evan Rodrigues on right wing, and converted defenseman Ahti Oksanen on left wing. Rodrigues is an effective all-around player, and Oksanen is best known for his booming shot and strong offensive instincts.

Just 3:14 into the game, Eichel made his presence known. He took the puck from his own defensive zone through the neutral zone, and dangled between two defenders at the blueline. The puck skipped into the corner, where Eichel retrieved it and delivered a crisp pass to Oksanen’s stick, in the middle of 3 defenders, where he tapped it in for a 1-0 BU lead.

Seven minutes later, Eichel went streaking into the St. Thomas zone on a 2-on-1 with Oksanen. He held onto the puck just long enough for Oksanen to get his stick into an open lane between the defender, threaded a perfect pass, and it was 2-0 BU.

Less than a minute into the second period, Eichel corralled the puck in the offensive zone. He made a beautiful toe drag to get around one defenseman, and had a opportunity to get off a high quality shot that 99% of hockey players would take. But Jack Eichel is not your typical hockey player. With 3 St. Thomas defenders staring at him, Eichel slipped the puck across the crease to a wide open Oksanen in the slot. Oksanen had a hat trick and Eichel 3 primary assists.

Less than four minutes later, Eichel raced towards a loose puck along the boards in the St. Thomas zone. No doubt frustrated by the performance he had displayed against them, three St. Thomas defenders headed right towards Eichel. Eichel collected the puck, and delivered a pass to the slot where Oksanen (who else?) was wide open. He made no mistake, and put it in the net for his 4th goal and Eichel’s 4th assist. The photo below came just after Eichel delivered the pass. 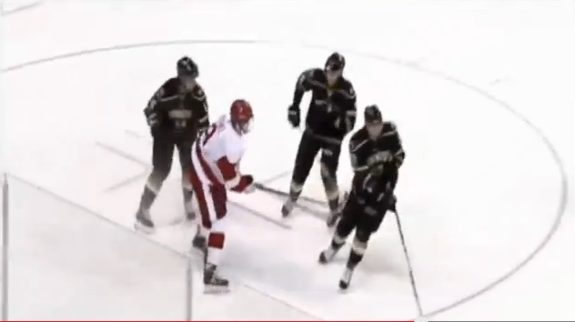 Eichel’s final moment of glory came on the power play where he was controlling the puck in the corner. Not at all tipping off that he was going to pass, Eichel fired a laser of a pass through the St. Thomas box to pinching defenseman Johnny MacLeod, who sent the goalie’s water bottle flying for his first career goal as a Terrier.

All five of Eichel’s assists can be found below:

While the Terriers were playing a vastly inferior opponent that is not indicative of the regular competition Eichel will face, his debut was nonetheless extremely impressive. After the first two goals, it was clear that the St. Thomas defenders were making a concerted effort to try to stop Eichel. They watched him and sent multiple defenders after him in their defensive zone. And it didn’t matter.

If other teams send multiple players after him, Eichel is good enough that he can find his subsequent open teammate in a split second. Eichel is truly an all-around elite package in the offensive zone. Give him the space to shoot, and he’ll take it. Take it away, and he’ll find an open teammate. 5 assists in a game is impressive, but it’s even more impressive when they are all primary assists, and the every play is a result of your offensive creativity.

In Round 1 of the McDavid vs. Eichel battle, McDavid came out with a strong left hook, and Eichel answered right back with a powerful right uppercut.

Up Next on the Jack Eichel Tracker: Eichel will face UMass Amherst this Friday in his Hockey East debut, and play his former USNTDP teammates next Saturday.