Coming into the season, many expected the Oshawa Generals to go through a rebuilding season now two years removed from their victory at the Mastercard Memorial Cup. Thanks to players like Jack Studnicka, the Generals made it much further in the playoffs than anyone anticipated.

Studnicka recorded 18 goals and 52 points in 64 games. His 52 points was second (tied) on the team only behind the 63 points of Domenic Commisso. In watching him live and on tape, the one thing that immediately jumped out at me was his skating. His first step was among the best I’ve seen in the league. Once he gets to top speed, he’s hard to stop. 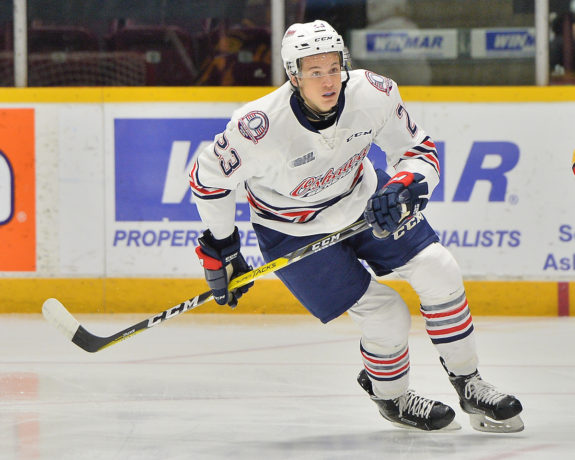 Studnicka can bring it at both ends of the ice.
(Photo by Terry Wilson / OHL Images.)

I was just as impressed with Studnicka on the defensive end. He’s very detail oriented in his approach. Whether it’s winning a key faceoff on special teams or at the end of a game, you could count on Studnicka being on the ice in that pressure situation. His success both on the power play and shorthanded make him a valuable two-way player who could make an impact at the next level.

Like most young prospects, Studnicka does need to add muscle. He has the size at 6-foot-1 but can be pushed off pucks by stronger players. I’d also like to see him improve on his consistency. He went a stretch during the season where he scored just once in 18 games. He has an underrated shot that can be better utilized. To his credit, he scored over a point per game in the playoffs helping the Generals get to the second round. He was their best player by a mile in the playoffs not counting goaltender Jeremy Brodeur. That’s what I mean though. He can have stretches of dominance, but needs to consistently show that in his game.

Projections on Studnicka range from the third round to the sixth round. His playoff performance opened some eyes including mine. I now have him late in the fourth round. I originally had him as a sixth rounder but moved him up thanks to his playoff run.

“Studnicka has good size – although adding bulk will be key for him. He is an excellent skater who has an explosive first step and decent top end speed who can change direction with ease. He possesses very good vision with high quality playmaking skills with an ability to set up his teammates. His shot is underrated in my opinion. His release is deceptive and accurate and he puts every shot on goal with a purpose. Studnicka can be elusive in the offensive zone. He can break away from coverage almost undetected and put himself into scoring positions. He has very good puck skills and strong possession skills. Although he needs to add some muscle, he will not shy away from the hard areas. Once he gets stronger, it will become an area where he wins more often than he loses because of it – and his work ethic.” – Dominic Tiano

“Jack has emerged as one of the most important players for one of the most surprising teams (Oshawa) in the league. Studnicka is a very complete player who plays in all situations for the Generals and demonstrates great vision and patience in the offensive zone. While he didn’t get any votes for the preliminary media poll, that doesn’t mean he doesn’t have fans in the scouting community. If the Generals continue to play well and he continues to be a big factor, he should creep his way up draft lists.” – Brock Otten

Studnicka’s upside is that of a middle-six, two-way center who can chip in some offense. He has a higher floor than some of his peers thanks to his defensive game. He can also play in all situations which gives him a better chance at the next level.