A few days ago, I wrote about prospects that should get a chance with the Toronto Maple Leafs in the second half of the season. One of the players listed was Josh Leivo, a prospect who was drafted in 2011 but has only played 16 total games with the Leafs. It didn’t take long for that to actually happen. James van Riemsdyk suffered a fracture in his foot and could be out for the next two months. The Leafs then called up Leivo to take his place in the lineup.

As we all know, the Leafs offense isn’t that good. The Leafs as a team have scored 100 goals this season. Only five teams have less. JVR is one of three players on the Leafs to have more than 10 goals (14), the others being Leo Komarov (15) and P-A Parenteau (11). With the loss of van Riemsdyk, it’s not impossible that the Leafs could fall even further in the team offense category.

As the season goes on, the Leafs will be facing a lot of teams that are fighting for playoff spots, especially in their own division. Those teams will be much more of a challenge and with their leading scorer out for potentially half of their remaining games, it doesn’t make it any easier. No matter what happens, it’s going to be a difficult second half.

Time To Blow It Up

So let’s presume things do get worse for the rest of the season. That could mean that a player’s trade value could start to go down. Sure, the Leafs will be going for prospects and draft picks but the quality of the return will be hurt.

The next month and a half before the NHL Trade Deadline could be about one of two things. The Leafs could either be more of the same, using the same players to just stay in games. However, it could also be about finding what the Leafs have in some of their prospects. I mentioned Leivo, Kasperi Kapanen, Jeremy Morin and Stuart Percy in my previous piece, but it could be more than that.

Maybe Connor Brown could see some time after he returns from his injury. The same goes for William Nylander, although the Leafs will be extremely patient with him. It would not be a surprise to see him play the final nine games of the season with the big club. The Leafs probably don’t want to hurt the Marlies roster too much though.

I’m not saying that the Leafs should trade everyone right now, but they could start. Parenteau and Grabner are names that could get the Leafs a second- or third-round pick if they found the right team. Plus, if the Leafs decide to blow it up now, they have longer to negotiate deals for players that have term left on their contracts, such as Tyler Bozak, Joffrey Lupul and Dion Phaneuf. 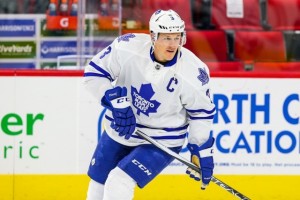 Some have said that the fact that the Canadian dollar is so low that it will affect what teams will do at the Deadline. Rentals will be sought after much more than players who might have another year or two left on their deal. If that does turn out to be the case, the Leafs should get moving soon as they have seven players that are set to become unrestricted free agents on July 1.

Again, that should not keep the Leafs from trying to move players with term. Lupul isn’t exactly that hot right now so his value might not be so high. However, the way that Boazk and Phaneuf have played might make their contracts a little more palatable, especially if the Leafs retain some salary and/or take a bad contract back.

What would you do if you were the Leafs? Would you make the moves now or wait until the deadline?